Monday, January 30
You are at:Home»News»Court»SMK Taun Gusi students take teacher to court for failing to attend English class
For the freshest news, join The Borneo Post's Telegram Channel and The Borneo Post on Newswav. 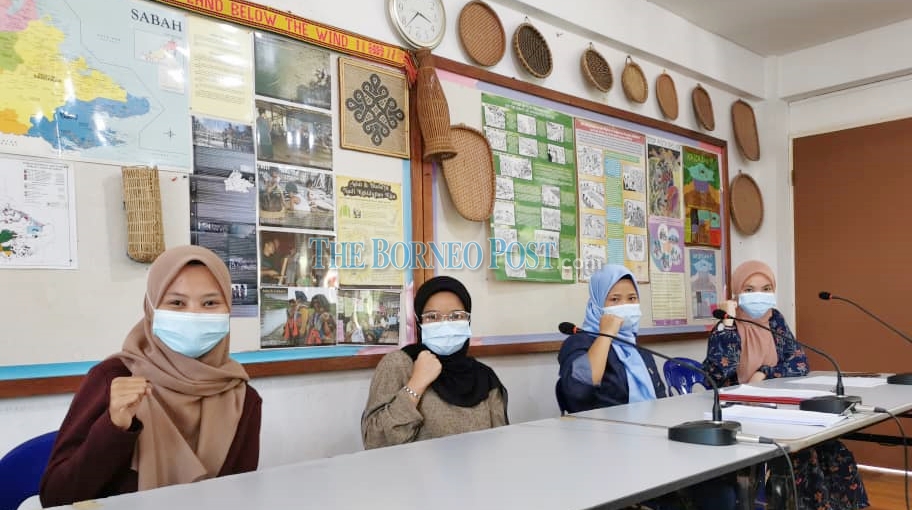 (From right) Litigants Calvina, Rusiah and Nur Natasha at the press conference announcing the filing of their suit against their former English teacher. Also present was Siti Nafirah (left) as a show of solidarity.

Three more defendants in the case were the Director-General of Education Malaysia, the Minister of Education and the Federal Government of Malaysia.

Rusiah Sabdarin, Nur Natasha Allisya Hamali and Calvina Angayung were 16 when their teacher Mohd Jainal allegedly failed to teach their English class for months in 2017, with zero attendance after July of the same year.

“We lost a year of lessons and if we had not complained to the principal, maybe we would be stuck with the same (absentee) teacher for a longer time,” said Calvina.

Meanwhile, Nur Natasha illustrated the discouragement she endured from some of the people closest to her, when she told them she was pursuing the case in the High Court. Nevertheless, she refused to give up.

“When I told people that I was taking my former teacher to court for being absent and failing to fulfil his duty as a teacher, they told me it was better to withdraw the case. They tried to discourage me by saying that pursuing the case would only cause more problems in my life.

“But I don’t think this case is causing me trouble at all. I am happy to do this and I will not give up. It’s clear that when teachers refuse to teach, a school’s culture quickly degrades: more students fight, more students break the rules, and more students themselves begin to leave classes and even school. How do I know this? I was a school prefect and these consequences of absent teachers are abundantly clear.

“Should such public servants, teachers and MOE officers be given another chance after years of hurting students? Too much time has been wasted by a teacher who remorselessly refuses to teach for months, each year. I wonder what was the fate of the students before us? Because after what happened to Siti Nafirah, it continued to happen to us even two years later,” said Nur Natasha.

In 2018, one Siti Nafirah Siman filed a Court summons against the same defendant for the same alleged misconduct of being absent from English class. The case of Siti Nafirah was the first of its kind, in calling to question the misconduct of the public education sector.

Now, two years later, Rusiah, Nur Natasha and Calvina are empowered to take similar action against the same alleged perpetrator. They said that while they are not the first to do so, they hope to be the last.