Tuesday, January 19
You are at:Home»News»DCCI wants more Dayaks to be appointed to boards of statutory bodies, govt devt business initiatives 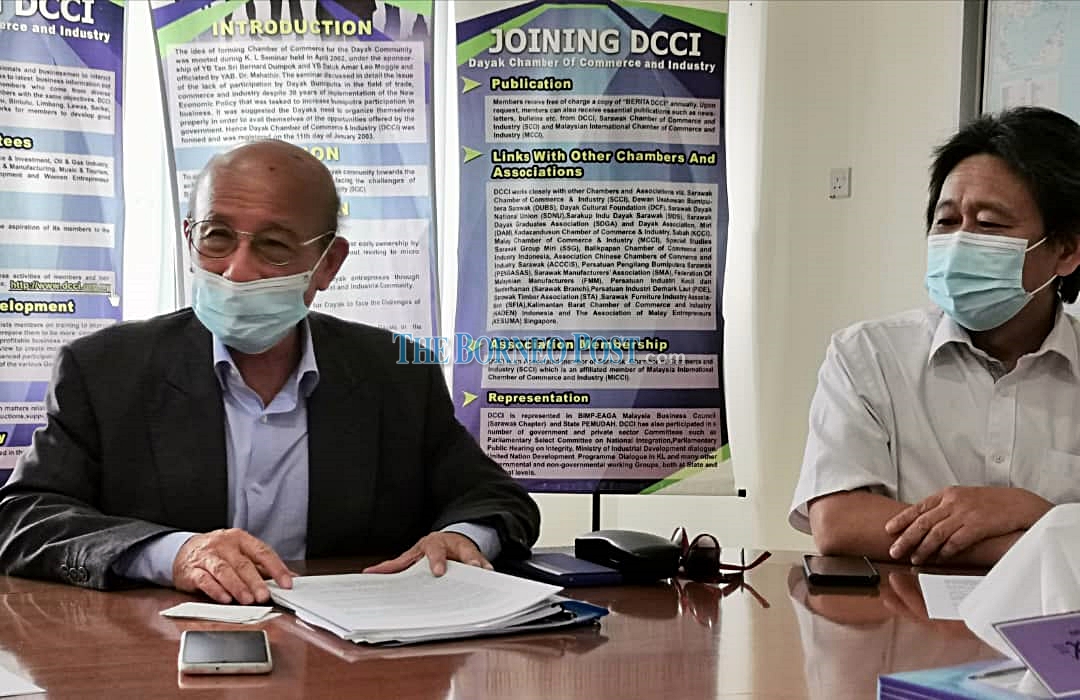 KUCHING (Dec 24): Dayak Chamber of Commerce and Industry (DCCI) has proposed that more corporate personalities from the Dayak community are appointed to the boards of various statutory bodies and government’s development business initiatives.

Its president Dato Leonard Martin Uning said this is one of 10 proposals from DCCI to increase Bumiputera participation in all sectors particularly from the Dayak community.

“The appointments to these bodies and such likes will be a form of capacity building and to prepare them for new business ventures. For example, digital economy which is something new. If we have somebody there at least the can tell us what it is all about and how we can increase our participation.

“There are also new business opportunities which we can be involved and participate from these bodies and business initiatives,” he said at a press conference today.

It was held to express DCCI’s response to Chief Minister Datuk Patinggi Abang Johari Tun Openg’s recent announcement that Sarawak government is working on a formula to nurture and increase Bumiputera participation in all industries in the state.

News reports on Dec 21 quoted Abang Johari as saying that he had informed the State Financial Secretary’s office to come up with a formula to ensure certain jobs or projects are given to Bumiputera contractors.

Leonard said DCCI is grateful to the Chief Minister and expressed their gratitude for his commitment to “nurture and improve Bumiputera participation in all sectors of our economy”.

He stressed that the issue of Bumiputera participation in economy is important, since the Bumiputera makes up about 75 per cent of the state’s population.

“We are prepared and ready to work together with the State Secretary, the State Financial Secretary and the Director of the Sarawak Economic Planning Unit to come up with the mechanism to realise his vision for the Bumiputera Business Community.

Leonard said DCCI also proposed that Bumiputera participation in Sarawak in all sectors of the economy should be tracked in term of main composition of the Bumiputera community namely the Iban, Malay, Bidayuh, Orang Ulu and Melanau.

To achieve these objectives, he said DCCI recommends that the state government set up a Bumiputera Unit in the State Economic Planning Unit and the Bumiputera Empowerment Council directly under the Chief Minister.

“We propose the state government to take steps to establish the Bumiputera Commercial and Industrial Community (BCIC) for all important sectors of the state’s economy.

“We also propose that Dayak-owned companies registered with DCCI to be issued with a certificate by DCCI as Bumiputera (Dayak) Companies. We would like the government to recognise the certificate as an official document to be attached to all applications including tenders in order to prevent the term ‘Bumiputera’ from being abused,” he added.

He also said DCCI recommends that the Open Tender System (OTS) for the Government Procurement System be reviewed and restructured.

“We believe that OTS system puts Bumiputera companies at a disadvantage and may drag them into unrealistic tender price submission, in their desperation to compete. In the end they may not be able to complete the projects or will end up having serious financial problems,” he explained.

Another proposal by DCCI was to recommend for a mechanism of buffer or handicap system to be put in place in order to nurture Bumiputera business community to attain the status of BCIC in the important sectors of the state economy.

“It will have to begin with a lot of propping up devices or a systematic implementation of Bumiputera Empowerment Policies and Programs. The Bumiputera Chambers must be therefore be viewed by the government not as mere NGOs but to play the role of critical leaders and dominant forces to drive Bumiputera business to a level of BCIC in all the sectors of the economy,” added Leonard.

Other proposals include recommendation for a Government Bumiputera Protection Policy be emplaced to ensure that the wealth created be equitably distributed, and the programmes for the nurturing and improving Bumiputera participation in all sectors of the economy must be documented as policies.

“DCCI recommends the need for the government to create more Bumiputera Commercial Centres in towns and cities including rural towns as necessary business infrastructures to bring more Bumiputera businesses to the urban environment.

“DCCI also recommends more incentives be create for the expansion and upgrading of Dayak companies to attain the level where they are able to get into the more sophisticated international players,” he said.