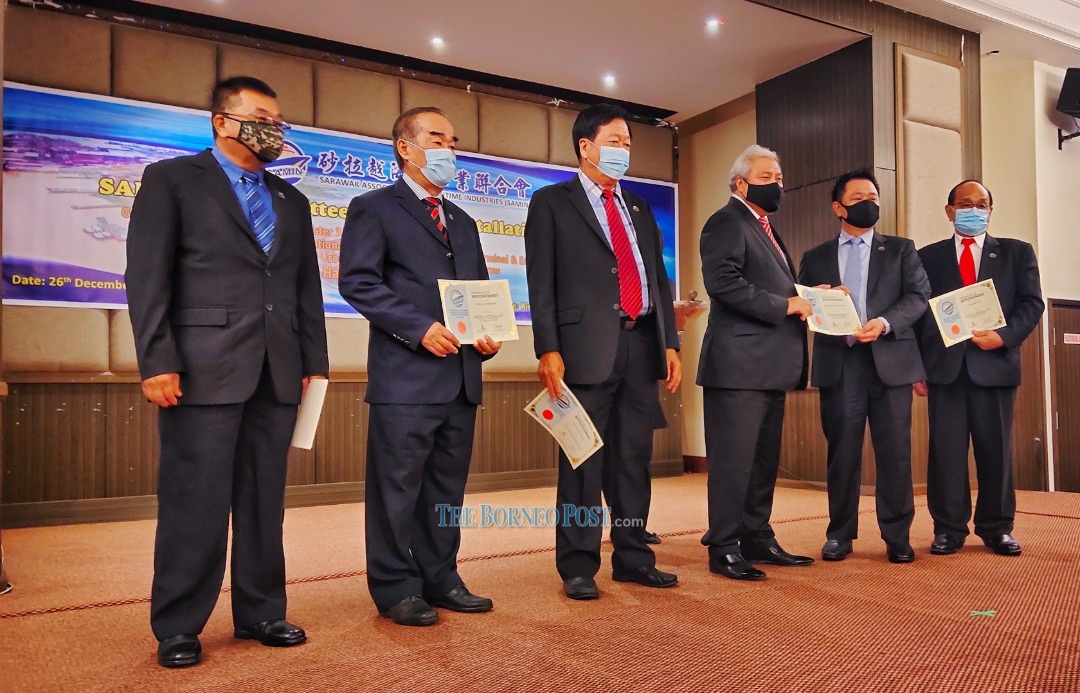 He pointed out that this is because the location was suitable for bigger vessels.

“Paloh will provide you with better opportunities to become big players in shipbuilding, ship repairs as well as for oil and gas industry,” said Awang Tengah, who is also Deputy Chief Minister.

Meanwhile, asked to elaborate a point in his speech earlier, after the function, Awang Tengah, said: “As you know, we try to develop one area in Kuala Paloh for marine engineering park.

“And the proposal by Samin (president Dr Renco Yong) just now is to declare that area once it is completed as a free trade zone area. So, this is a good proposal and of course, now is to ensure the smooth implementation for that project – one of our top priorities for 12th Malaysia Plan to establish the marine engineering park that includes shipbuilding in Paloh.”

Asked on the cost to develop the park, he pointed out that the details including the cost, has yet to be decided.

Meanwhile, Yong estimated that the facility when completed in time to come, can attract a potential investment of RM1.5 billion.

In his speech earlier, Awang Tengah, who is also Second Minister of Urban Development and Resources, revealed that earthworks for Sibu Industrial Park covering an area of 150 acres has commenced.

“This Industrial Park is designed for the general industries to cater for the demand of the local SMEs (small-medium enterprises). There is some delay for this project due to MCO (Movement Control Order) and the bad weather lately. The industrial park is expected to be completed by end of 2023,” he informed.

“The Ministry is now undertaking the development of additional 21 acres in Rantau Panjang Phase II. Earthworks is about to commence soon, and we expect to complete the extension works by end of 2022. This extension works is upon the request made by Sibu Shipyards Association,” he said.

The Deputy Chief Minister also mentioned that the maritime industry has made sizeable contribution to the State’s economy.

“Based on statistics, the industry has generated export valued at RM279 million in 2018, RM349 million in 2019 and RM168 million up to October 2020. This is a testament to the high quality and technical capabilities of our local shipbuilders,” he said.

Currently, Malaysia has about 100 shipyards nationwide whereby there are 60 are located in Sarawak, he noted.

“Out of these shipyards, 40 are operating here in Sibu area specialising in building and repairing small to medium sized vessels such as tugboats, offshore support vessels (OSVs), barges, passenger boats, and so on. Sibu certainly has the potential to be the centre for Malaysia’s maritime industry.”

Touching on the formation of Samin, he described as timely to further promote the interests of the maritime industry in Sarawak.

“I understand that Samin is represented by a broad cross-section of the industry, comprising shipbuilding, ship repairs, marine maintenance, engine repair and overhaul, naval architects, maritime consultants and academia, marine product manufacturers, and the supporting industries.

“I hope Samin will continue to play an active role for the advancement of maritime industry in Sarawak,” Awang Tengah said.

Meanwhile, Yong helms Samin for the term 2020 – 2021 and assisted by his deputy Ting Hien Liong.