Friday, September 24
You are at:Home»News»Baby among four illegals held in Tawau 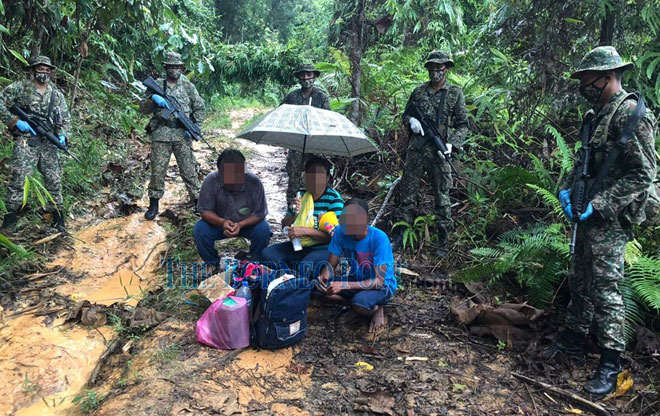 The illegal immigrants, including a baby, seen with the troops at Serudong.

TAWAU: The Fifth Division Infantry of the Malaysian Armed Forces (ATM) apprehended four illegal immigrants, including a seven-month-old infant, at Serudong on Friday.

Brigade commander Brig-Gen Zambery Jefry Darus said on Dec 25, two men, a woman and a baby were detected entering the area approaching from the Indonesian border.

Upon checking, the three adult Indonesians – aged between 38 and 48 – did not have any valid identity document and were discovered to have been living in the country since the beginning of the year to gain employment opportunities in the plantation sector.

The results of the investigation also found due to limited employment opportunities following the spread of the Covid-19, the three adults planned to return to Indonesia.

At 5.20pm, all three adults and the baby were expelled from the Malaysian border, accompanied by ATM members to the Indonesian border.

A police report was also lodged at the Kalabakan Police station to facilitate further investigation.