Thursday, August 18
You are at:Home»World»Harris vaccinated on camera, urges public to trust process 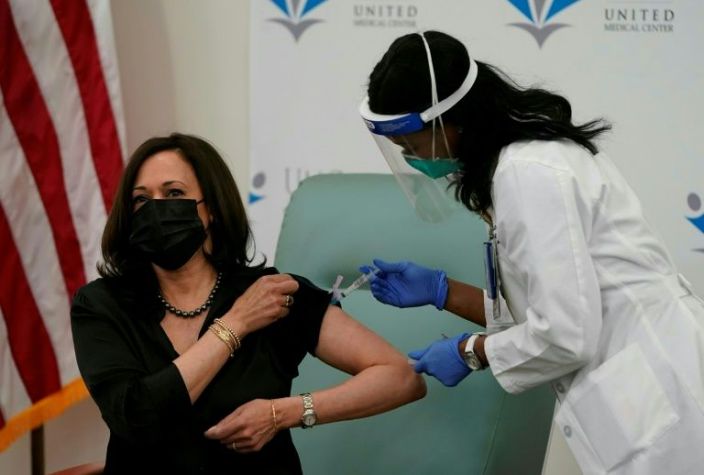 US Vice President-elect Kamala Harris received her Covid vaccine live on television Tuesday and urged public trust in the process, while her choice of hospital highlighted the plight of the hard-hit African-American community.

A mask-wearing Harris received the first of her two shots at United Medical Center, located in an area of Washington, DC with a large African-American population.

African-American communities nationwide have seen disproportionately high levels of death and illness related to the Covid-19 pandemic, while polls have also indicated they are among the most reluctant to get vaccinated.

“So I want to remind people that right in your community is where you can take the vaccine, where you will receive the vaccine by folks you may know,” she said after receiving the vaccine manufactured by US firm Moderna.

“So I want to remind people that they have trusted sources of help and that’s where they will be able to go to get the vaccine.”

Harris will become the first Black and Indian-American vice president when she takes office on January 20, as well as the first woman in the role.

Her husband Doug Emhoff was also to be vaccinated.

A string of public officials have been vaccinated before cameras as part of efforts to overcome public skepticism and convince those in doubt that the immunizations are vital to returning to a semblance of normality in the months ahead.

President-elect Joe Biden was vaccinated live on television on December 21.

Outgoing President Donald Trump, who was hospitalized with the virus in October, has not committed to being vaccinated.

Trump has repeatedly downplayed the dangerousness of the virus and urged business and school reopenings despite its surge nationwide.

The United States has registered some 19.3 million cases and more than 335,000 deaths related to the virus, both the world’s highest,according to figures from Johns Hopkins University. – AFP