Saturday, October 23
You are at:Home»News»Lee: New jetty structure to be built at RC Pontoon Wharf 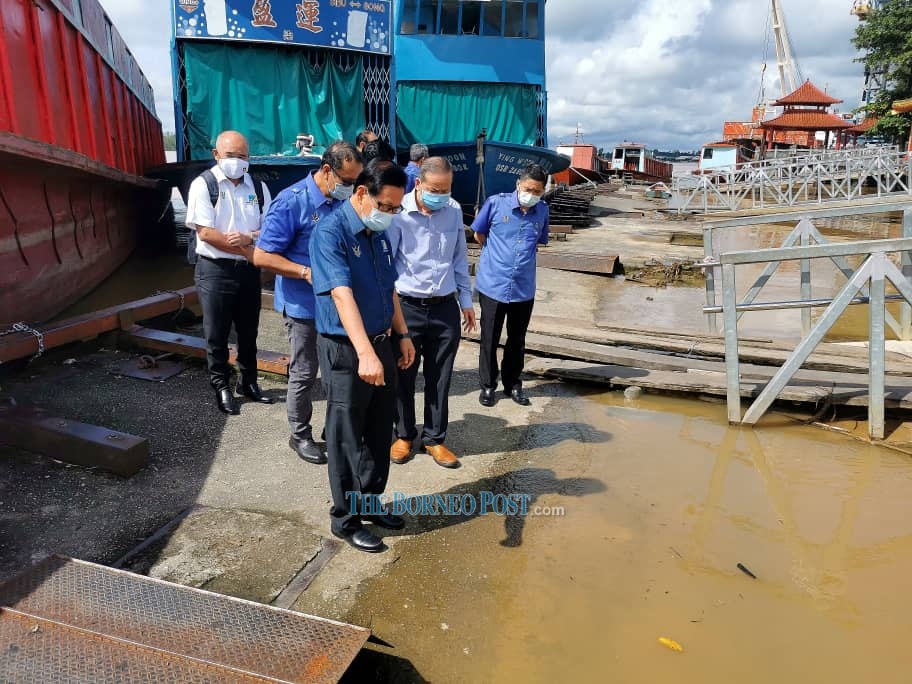 Lee points to the partially submerged portion of the pontoon at RC Pontoon Wharf in Temple Street, Sibu.

SIBU (Jan 8): A new jetty structure will be built at the existing RC Pontoon Wharf at Temple Street here as a long-term solution to the aging pontoons which have passed their economic life, announced Transport Minister Datuk Lee Kim Shin.

He revealed that the construction works would take six months to complete, where the operations of the ‘Kapal Bandung’ (double-decker vessels) would be temporarily relocated to RC Burung Apu cargo wharf.

“The duration for the contractor to complete this work is six months. As a temporary solution, all ‘Kapal Bandung’ will be relocated to berth at RC Burung Apu cargo wharf for loading and unloading activities,” Lee said in a press release today.

In this regard, he was glad to hand over the Letter of Acceptance to Syarikat Shar Permata, the appointed contractor to implement the said works, adding that the appointment of the contractor for this purpose was done through open tender process.

Lee added: “In this connection, I would like to urge the appointed contractor to perform the work in accordance with the contract and to complete the work as scheduled so that the facility can be delivered and utilised as scheduled.

“I am also hoping that all the users particularly the operators of ‘Kapal-Kapal Bandung’ to be patience with the situation and to give their cooperation while waiting for the new facility to be completed for their convenience.”

Earlier, the Minister disclosed that in the first quarter of 2020, the ministry had received complaints from ‘Persatuan Kapal Bandung Sibu’ on the four out of seven pontoons which are partially submerged at RC Pontoon.

“As a rectification action for short-term solution, some immediate repair works have been carried out on the facilities, particularly the pontoon’s joint, fenders and steel rope ties. A safety notice to remind the public to take necessary safety precaution at the facilities has been erected.

“All these while, Sarawak Rivers Board (SRB) has been monitoring closely the physical condition of these facilities and has taken the necessary measures to ensure the affected pontoons are operational and can be used by the public. Among measures taken are daily pumping water out of the pontoons to reduce stress on the pontoons, scheduled inspection on the freeboard of pontoons and monitored boats operating and alongside the pontoons.

“As promised, I am very glad to announce that for a long-term solution, a new jetty structure is to be built at the existing RC Pontoon Wharf Temple Street, Sibu,” Lee said.

That aside, he pointed out that since the formation of the Ministry of Transport, Sarawak (MOTS) on August 22, 2019, MOTS had been working closely with SRB, the agency under MOTS purview that is responsible to manage and monitor the development of riverine facilities such as passenger’s terminal, wharves and jetties in the state.

The Ministry found that some of the existing riverine facilities under SRB are in dire condition which requires repair and renewal works to be carried out in order to maintain its commercial and safe for use condition, he said.

“The Ministry has also received complaints from the users and operators of river transport informing the condition of existing facilities which needs the attention from the authority. Some are in really bad condition which may compromise the safety and confidence of the users,” he noted.