Tuesday, January 19
You are at:Home»World»Police officer’s death brings US Capitol unrest toll to 5 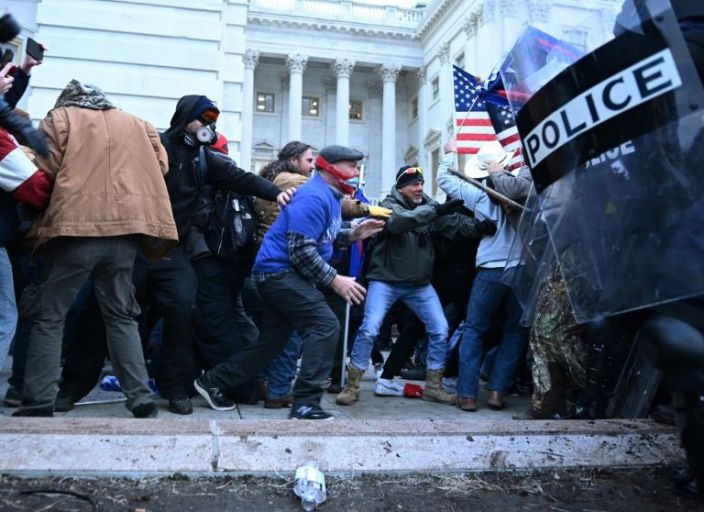 Trump supporters clash with police and security forces, as they storm the US Capitol — five people died during the riot, including one Capitol Police officer. AFP Photo

Flags over the US Capitol were lowered to half-staff Friday after the death of a police officer took to five the number of people who died after President Donald Trump’s supporters stormed the legislature.

US Capitol Police officer Brian Sicknick was reportedly struck in the head with a fire extinguisher on Wednesday while struggling with the rioters who swarmed through the halls of Congress.

The 42-year-old member of the force that protects the ground of the Congress returned to his division office where he collapsed and was taken to the hospital, according to the Capitol Police.

He died of his injuries late Thursday, they said.

According to reports, the FBI will open a murder investigation into his death.

House Speaker Nancy Pelosi ordered flags over the Capitol lowered in his honor.

“The violent and deadly act of insurrection targeting the Capitol, our temple of American Democracy, and its workers was a profound tragedy and stain on our nation’s history,” she said in a statement.

“The sacrifice of Officer Sicknick reminds us of our obligation to those we serve: to protect our country from all threats foreign and domestic.”

Four others, all associated with the protests in support of Trump’s unsupported claim that he won the November 3 election, also died on Wednesday.

Air Force veteran Ashli Babbitt, 35 and a fervent backer of the president from San Diego, California, was shot dead by a Capitol Police officer inside the Capitol building Wednesday.

With a Trump flag wrapped around her, she was at the front of a crowd attempting to batter through an internal doorway when the officer on the other side fired one shot which struck her.

Three others died on the Capitol grounds, police said, of “medical emergencies.”

The two men and one woman were also there to protest for Trump. Rosanne Boyland, 34, from Kennesaw, Georgia, was reportedly trampled during the melee outside the legislature and died of her injuries.

And Benjamin Phillips, 50, from Ringtown, Pennsylvania, who had organized a busload of Trump supporters to join the protests, reportedly suffered a stroke. — AFP

Previous ArticleTrump to skip Biden inauguration after presidency implodes
Next Article ‘Human remains’ find turned out to be a potato: UK police