Saturday, January 16
You are at:Home»Health & Environment»China says WHO coronavirus experts to visit from Thursday 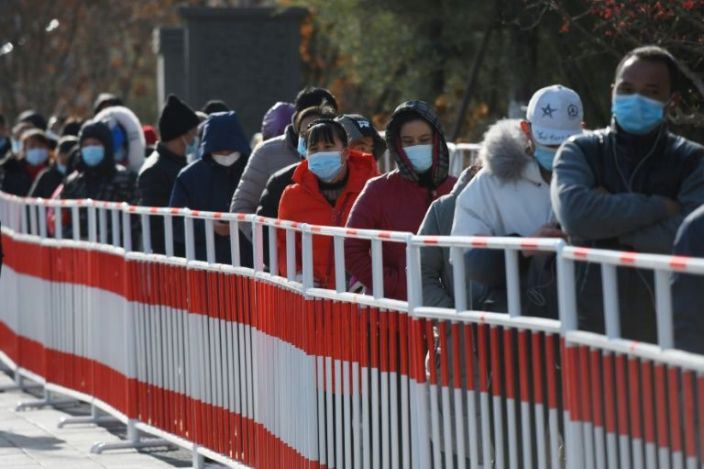 Residents line up to be tested for coronavirus in Beijing on January 11, 2021, after new cases emerged in the province which surrounds the capital. AFP Photo

Ten World Health Organization scientists will visit China from Thursday to probe the origins of Covid-19, authorities said Monday, more than a year after the pandemic began and amid accusations Beijing has tried to thwart the investigation.

The long-awaited mission is of great political significance at a time when the coronavirus pandemic has devastated the world, caused almost two million deaths, and brought the global economy to a virtual standstill.

The WHO team “will conduct joint research cooperation on the origins of Covid-19 with Chinese scientists”, the National Health Commission said in a statement that provided no further details.

A last-minute delay to the mission earlier this month earned China a rare rebuke from the head of the WHO.

But on Monday he tweeted his approval of China’s announcement on a “critical mission” to identify the origins of the virus and how it jumped to humans.

Beijing sought to downplay the tension, however, with foreign ministry spokeswoman Hua Chunying calling it a “misunderstanding”.

The WHO experts will have to quarantine for two weeks on arrival, but are expected later to visit Wuhan — the city where the deadly virus was first detected in late 2019.

The US and Australia have led international calls for an independent inquiry into the origins of the virus, putting China under significant pressure amid growing calls for accountability.

Beijing has faced international criticism over its lack of transparency during the initial outbreak, although domestically the government has praised its own handling of the outbreak and stifled any criticism.

Government officials have repeatedly said that tracing the origins of the pandemic was a “scientific matter”, and has even pushed theories it originated outside China.

Experts say solving the mystery of how it first jumped from animals to humans is crucial to preventing another pandemic, but China’s tight control of its scientific research leaves little hope of finding definitive conclusions.

There is little dispute that the virus emerged in late 2019 at a wet market in Wuhan where wildlife was sold as food, and the pathogen is believed to have originated in an undetermined bat species.

The quest to detect its origins has also been plagued by conspiracy theories — amplified by US President Donald Trump — that it leaked from a Wuhan virology lab. — AFP

Previous Article3,000 volunteers in Phase 3 clinical trial for Covid-19 vaccine
Next Article Operation of educational institutions under MOE based on type of Movement Control Order