Tuesday, January 19
You are at:Home»News»Baru Bian’s claim to have been sacked by PKR is ‘untrue’, says PKR S’wak secretary 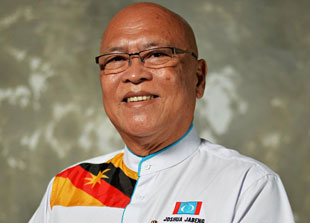 Joshua claimed that Baru, who is now a presidential council member of Parti Sarawak Bersatu (PSB), had voluntarily left PKR on his own accord during the “Sheraton Move”.

“The widely circulated photograph clearly shows that he was among the 11 former MPs of Parti Keadilan behind (former PKR deputy president Datuk Seri) Azmin Ali who participated to bring down the legally elected PH government in February 2020,” he said in a press statement today.

The “Sheraton Move” got its name from the Sheraton hotel in Petaling Jaya, Selangor where several prominent factions within Pakatan Harapan (PH) had a clandestine meeting with leaders of the then Opposition Barisan Nasional (BN) in February that subsequently led to the formation of a new government under Bersatu president Tan Sri Muhyiddin Yassin in March.

Joshua said since PKR Sarawak no longer view Baru, who is also Ba Kelalan assemblyman, to be a long term partner that can enhance the goal of PH Sarawak’s to defeat Gabungan Parti Sarawak (GPS), it will not concede Ba Kalalan seat to PSB.

“We will contest all the state or parliamentary seats that were previously won by PKR. Decisive actions are necessary so that such act of betrayal by leaders whom we have placed our hope and trust in, will not be repeated.”

Joshua said the case of former PKR Sarawak vice chairman See Chee How was different because the latter was sacked for having found to have questionable loyalty to the party subsequent to his press statement about intending to form a new party or to join another local party.

“Needless to say in all sincerity, he could have made an appeal which was his absolute right but he did not,” he added.

Joshua said in politics, rumour milling is expected especially from GPS whose main objective is to remain in power by weakening the opposition but thanks to the open media of the internet, everyone can read and make their own judgement.

Previous ArticleCMCO: MCC facilities temporary closed until Jan 26 – Mayor
Next Article AAS wants to be included in formation of any Emergency committee