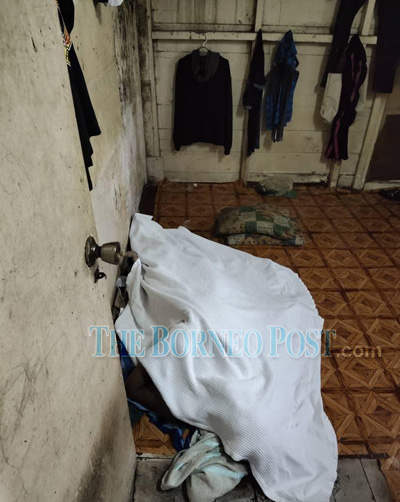 The body of the Indonesian, covered in blanket.

Police chief ACP Stanley Jonathan Ringgit said the man, identified as Urbanus Tono from West Kalimantan, was found dead by his friend at 6am when he tried to wake him (Urbanus) up.

Stanley said their investigation found that the man came to Sibu, from Kapit, on Jan 7 and was staying at a rented room with a fellow countryman.

“They previously worked at a construction site in Putai, Kapit, but were terminated after the company reduced the number of workers.

“They came to Sibu and rented a room at Jalan Huo Ping,” he said in a statement.

Investigation at the scene found no elements of foul play.

“Paramedics from Sibu Hospital also found no injuries on the body,” he said, adding
that the body was still covered in blanket when policemen came to the scene.

The body was later sent to Sibu Hospital for a post-mortem.

The case is classified as sudden death.