Tuesday, January 19
You are at:Home»News»Sabah»Sabah to set up facility for commercial aircraft maintenance 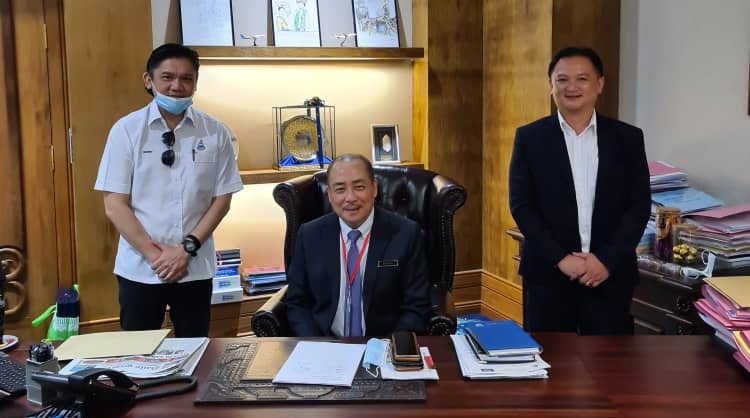 Chua (left) with Hajiji and Rodney (right) during the courtesy call.

The move is in line with the call by the State Government to develop high value and high-tech industry in the state, with the MRO based in the state capital, initially catering for single aisle commercial aircraft and for heavy maintenance that would attract major aerospace industry players to Sabah.

The setting up of the MRO will be a catalyst for the development of the aerospace industry in the State, said SAASB’s new chairman Kenny Chua Teck Ho.

“Our state is blessed in the sense that we’re strategically located in the region. Commercial aircrafts would have to go to places like Kuala Lumpur or Hong Kong for maintenance, repair and overhaul services. But once we have the MRO facility set up in the state, they could just do the services here instead,” he said after paying a courtesy call on Chief Minister Datuk Seri Panglima Haji Hajiji Noor on Tuesday.

Chua, a former state Assistant Finance Minister, briefed Hajiji on the company’s current and future plan with focus on new business strategy transformation which would open up more job opportunity to Sabahans especially in the aviation industry.

SAASB has been in the aviation industry since 1975 and is one of the pioneer aviation companies in the country.

In addition to Sabah’s ideal location, Chua noted that the state is already well placed on the regional aviation map as it has been a popular tourist destination, has air links with many other regional hubs and administered by a business-friendly government.

“Of course, the aviation industry is currently affected by Covid-19. But once the situation improves, we’ll be ready to take Sabah to the skies again through this MRO project.

“We’re also looking at the MRO project with an eye on the economic development in our Borneo neighbour, Kalimantan,” he said adding that the MRO project is expected to open up employment opportunities for locals and create an opportunity for Sabahans to acquire high skills in aviation so they can increase their value in the job market in the future.

He said to embark on the project, the state GLC will be negotiating with investors and relevant parties that have the expertise in the setting up of an MRO facility.

“Considering the importance of the MRO for Sabah, the current State Government is fully supportive of our commitment in pursuing it and making it happen. This is also in line with our Chief Minister’s aspiration in wanting to make Sabah a progressive state,” said Chua.

According to the Malaysian Aerospace Industry Report 2019, the country’s aerospace industry recorded an annual revenue of RM16.2 billion that year and produced 27,500 highly-skilled workers.

On a related matter, Chua said SAASB is also planning to revive the Flying Doctor’s service to provide health services to rural communities in the state.

“Many village residents in the rural areas are still found to be facing difficulties in seeking treatment at clinics or hospitals due to the distances.

“And now, as we continue fighting against the Covid-19 pandemic, the need to revive this service for our rural communities has become a matter of importance and urgency,” said Chua adding that SAASB is also planning to go into chartered cargo flight services to diversify its business activities.

The Flying Doctor’s service for isolated villages in the interior of Sabah was terminated by the Health Department in 2016 after 41 years.

Chua, who was recently appointed to the post, also disclosed that there are other development plans in the pipeline to propel SAASB, which was incorporated in 1975, to greater heights in the aviation industry.

“I’ll be working closely with SAASB management and staff to take SAASB to greater heights for the good of the state and its people,” said Chua, who is also Parti Solidariti Tanahairku’s coordinator for Sepanggar.

He revealed that one of his main tasks is to help SAASB secure more job contracts, especially from Petronas.

According to Chua, SAASB has existing job contracts with the national oil and gas company but is hoping to secure more.

On political matters, Chua, who also served as Inanam assemblyman, called on the state government to speed up the gazetting of many community settlements in the constituency as villages.

He said this is important so that locals who have been living in the settlements for decades would be able to benefit from amenities and facilities from the government.

Chua was accompanied by Sazma Aviation CEO Rodney Linus during the courtesy call.