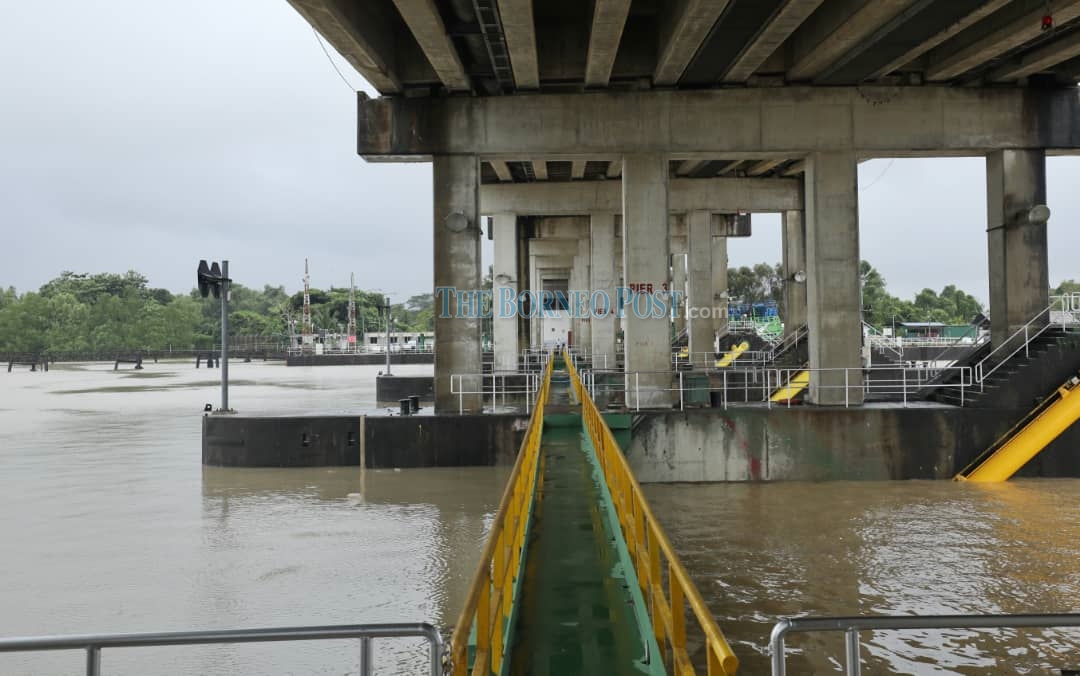 The water level at the Kuching Barrage with the Sarawak River on the right as at 4.40pm. – Photo by Chimon Upon

KUCHING (Jan 13): The Sarawak River is at risk of bursting its banks if the downpour, which led to widespread floods here yesterday, continues to fall this evening, said Sarawak Rivers Board (SRB) chairman Dr Murni Suhaili.

He said this is due to the high volume of river waters flowing down from the catchment areas coinciding with the King Tide.

“If it continues to rain, the risk of waters at Sungai Sarawak bursting its banks is imminent as high volume of river waters flowing down catchment areas and King Tide at 6pm today is expected to reach 10.6 meters downstream of Kuching Barrage,” he told The Borneo Post in a WhatsApp message.

“There is heavy rain at some areas along Sungai Sarawak Kiri however it is not consistent, whereas over at Sungai Sarawak Kanan, it is cloudy with light rain covering most areas,” he said, when providing an update on rainfall for Sarawak River catchment areas.

He said the management of Kuching Barrage will continue to monitor and commence a draining out operation as soon as the water level upstream and downstream of the Kuching Barrage permits.

“An operation to flush the Sarawak River water level upstream of Kuching Barrage will continue until the water level has reached 5.30 metres,” he added.

He said at 7am this morning, the water level at Kuching Barrage had reached 8.75 metres.

“The water level of Sarawak River had in fact dropped from 10.40 metres after an operation to flush the waters started at 3.37am early this morning,” he said.

The king tide in Sarawak is expected to reach 6 metres at 5.33pm today.

The Malaysian Meteorological Department (MetMalaysia) had issued a warning of bad weather with continuous heavy rains for some areas in Sarawak that is expected to last until tomorrow.

The department in a statement said continuous heavy rain is forecast in Kuching, Serian, Samarahan and Sri Aman while an alert weather warning with heavy rains is issued for Betong, Sarikei, Sibu and Mukah.

Several areas around Kuching have been inundated by floods since the incessant downpour started yesterday.