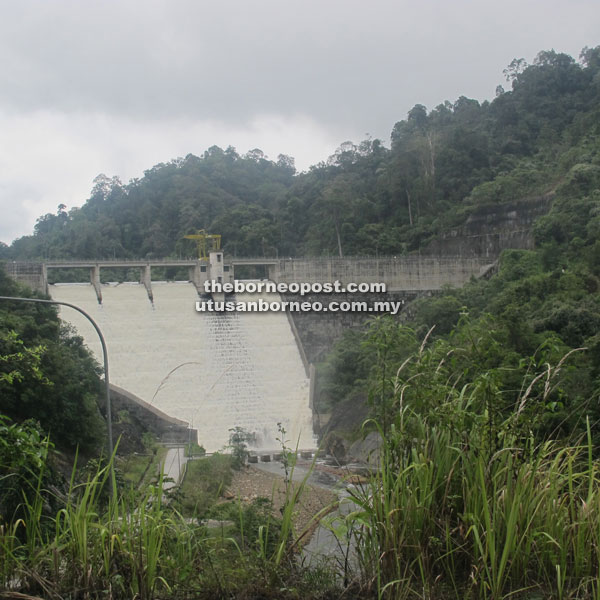 KUCHING (Jan 13): Following incessant rain over the catchment area of Sungai Sarawak Kiri over the past couple of days, the water level at Bengoh Dam has reached its maximum level of 80 metres and is overflowing through the spillway.

State Utilities Minister, Dato Sri Dr Stephen Rundi Utom said Kuching Water Board (KWB) had also reduced the water discharged from the valves of the dam to the lowest rate of 95 million litres per day (MLD).

“As the dam is full, there is no room for it to retain the precipitation to prevent a flood downstream and that being the case, all the precipitation in the Bengoh catchment area is wholly translated as overflow through the spillway of the dam,” he said on the operational status of Bengoh Dam during the rainy season.

At the same time, he said all the gates of the weir near the Batu Kitang water treatment plant were fully open to facilitate the discharge of the river water.

He said the discharge of the water from the dam would not affect (flooded) the nearby villages downstream – Kampung Bengoh, Kampung Danu, Kampung Semadang, Kampung Gian and Kampung Git.

Meanwhile, Sarawak Fire and Rescue Department director, Khirudin Drahman advised village chiefs, community leaders and the Village Development and Security Committees to be proactive in monitoring the flood situation at their respective villages and longhouses.

He said they must have an inventory and evacuation plan for their respective villages and longhouses, and provide special attention to the disabled and elderly living alone.

He also advised those staying in low-lying and flood-prone areas to be vigilant and immediately evacuate to the relief centres when ordered to do so by the authorities. – Bernama