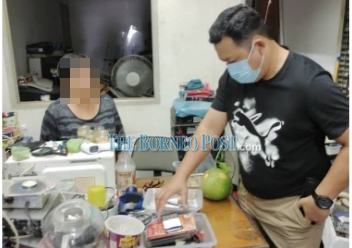 The suspect (left) speaking to a police personnel during the raid yesterday.

KUCHING (Jan 17): A 63-year-old woman was arrested during a raid at an electronics repair shop in MJC Batu Kawa here at around 6pm yesterday for allegedly selling illegal lottery numbers.

He added that a piece of paper believed to be containing betting numbers, was also found by police during the raid.

Aidil said the case is currently being investigated under Section 4A(a) of the Common Gaming Houses Act 1953, which provides for a fine of between RM20,000 and RM200,000, and up to five years in jail, if found guilty.