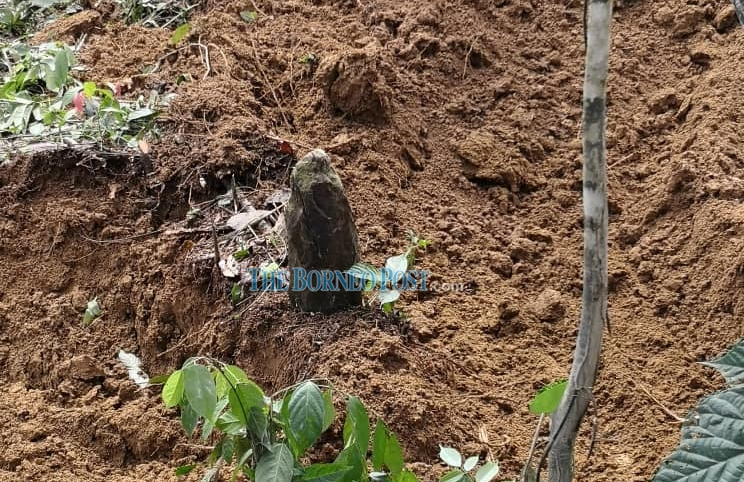 A single tombstone marking an old grave discovered by the contractor the of Jalan Ipai-Pendam in Limbang during the site clearing.

LIMBANG (Jan 19): A grave believed to be over a century old has been discovered this morning by a contractor building the Ipai-Pendam road in Limbang.

It is understood that construction’s workers stumbled upon this old grave and proceeded to inform the headman of Kampung Lubok Segantang of their discovery while they were working at the site of this ongoing 13-kilometre road project.

Limbang police chief Supt Abang Zainal Abidin Abang Ahmad said based on information received, the grave is over 100 years old and the village headman had requested Sarawak Islamic Department (JAIS) to relocate it to a graveyard nearby.

“The relocation exercise was carried out between 9am to 1pm (this morning) to the Muslim burial ground at Lubok Sigantang in a joint operation by the police, Jais, Ministry of Health, villagers and the contractor according to (Covid-19 prevention) SOP (standard operating procedure), “ he said in a statement today.

Abang Zainal said no human remains or coffin were found despite digging about three metres into the ground where the tombstone was found.

He added that the headman was satisfied with the effort and agreed to a halt in digging deeper into the ground and to relocate only the tombstone to the new site.

He was happy that all the stakeholders including Jais, police and village headman were engaged for a proper and dignified relocation of the tombstone to a new site according to Muslim’s belief and tradition, while enabling the road construction to continue.