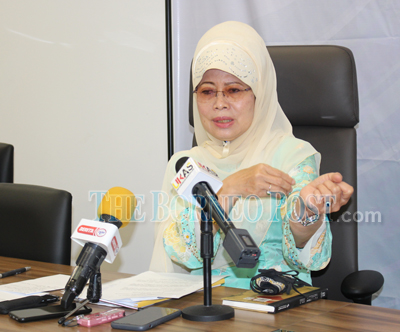 KUCHING: A total of 61 applications for the Sarawak’s government kidney patients assistance have been approved last year with an amount of RM420,452 provided, said Dato Sri Fatimah Abdullah.

“The number of kidney patients in the state and in the country as a whole has been increasing for the past years and kidney failures are mostly caused by diabetes, high blood pressure and obesity,” said the Minister of Welfare, Community Wellbeing, Women, Family and Childhood Development at a press conference here yesterday.

Giving a breakdown of the approved applications by division, she said 16 were from Kuching, one each from Samarahan and Serian, two from Sri Aman, one from Betong, one from Sarikei, five from Sibu, one from Kapit, two from Bintulu, 25 from Miri and six from Limbang.

A total of 18 applications were rejected last year because the beneficiaries had passed away, were currently receiving subsidised treatments at public hospitals, their household income did not meet the criteria and treatments are being fully paid by the Health Ministry, Public Services Department or Social Security Organisation (Socso).

Nine applications submitted were incomplete, including absence of confirmation by nephrologist on the applicant’s conditions and some requiring further investigations by the ministry on the applicants.

“The expenses associated with treating kidney failures are quite significant if it is to be shouldered by the poor individual alone. So, the state government decided to take the initiative by providing such assistance to kidney patients in the state last year,” said Fatimah.

Fatimah said the state government is also providing one-off payment of RM5,000 for kidney transplant procedure to cover flight and accommodation and an allocation to purchase haemodialysis machine costing RM42,000 per unit.

“This year we will be requesting to purchase 12 new haemodialysis machines because last year we did not purchase any and the machines will then be donated to public hospitals across the state,” she added.

Fatimah hoped the assistance provided to kidney patients will be continued this year.

As of Jan 19 this year, the ministry had received nine applications for the assistance.

Based on the data from State Health Department for 2018, there were 3,317 kidney patients with 2,920 of them receiving haemodialysis treatments and the others receiving CAPD and kidney transplant treatments in the state.  Forms to apply for the kidney treatments assistance can be obtained from the state health department’s office, district offices and Resident’s offices. Applications can also be made via the ministry’s website.