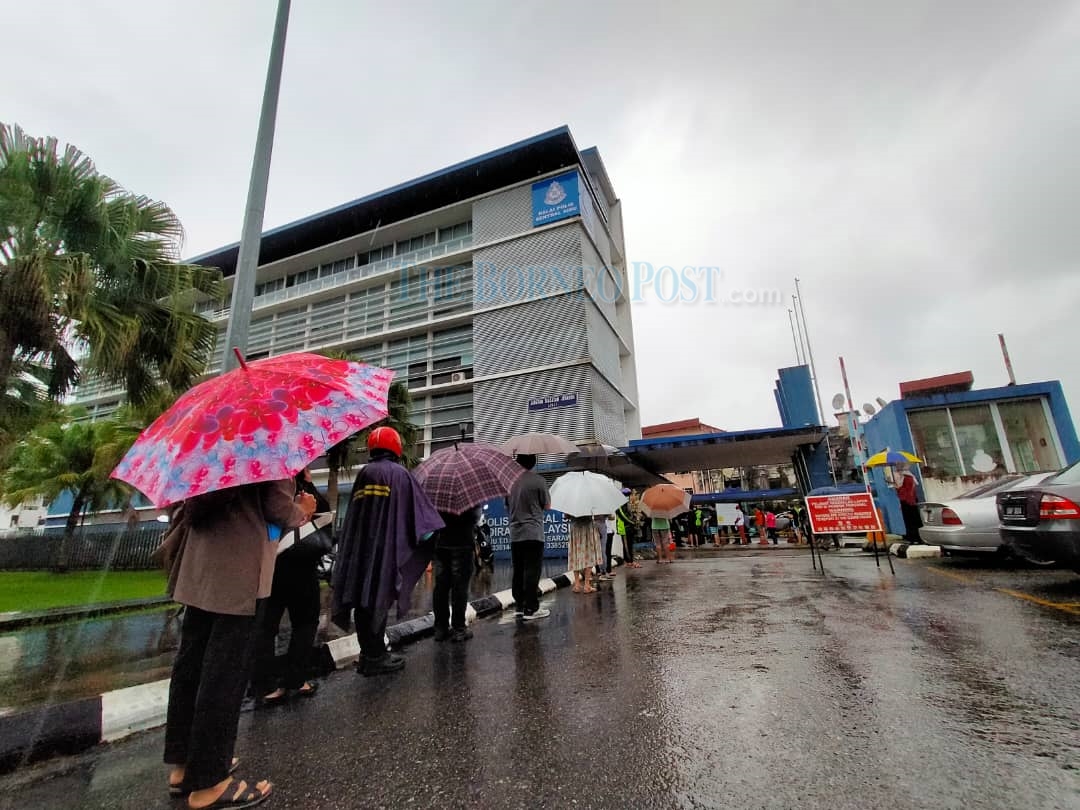 A long queue of applicants outside the Sibu Central Police Station this morning. – Photo by Danny Wong

SIBU (Jan 26): The long queues at police stations here today for the work-related travel permit during the Covid-19 Movement Control Order (MCO) period can be avoided if applications can be submitted online, applicants said.

Met at the Sungai Merah Police Station, Juliana Bolhari, 29, said she had to leave her house at 8am to stand in line in order to apply for the permit.

“If it is done online, I think this police permit application can be completed in less than five minutes,” she said.

The police today started accepting applications for the work-related travel permit for business under essential services after the Sibu Division Disaster Management Committee decided to enforce the permit from tomorrow to further reduce public movement here.

Sibu, which has seen a major spike in Covid-19 cases in recent weeks, has been placed under the MCO until Jan 29. The rest of Sarawak is under the Conditional Movement Control Order.

Another permit applicant, Thomas Nyanggau, 50, said the authorities should provide online applications to prevent the public from having to queue up at the police station and expose themselves to the virus.

“We do not blame anyone, but if done online, things like this are easier to do without having to leave home.

“I hope the authorities concerned will be more proactive in facilitating public affairs to apply for permits, thus reducing the risk of infection and transmission of the COVID-19 epidemic,” he said when met at the Sibu Central Police Station.

Parti Bumi Kenyalang (PBK) Priscilla Lau also said in a statement today that she had gone to the Sibu Central Police Station at 9am but found it packed with people standing under the rain, some with umbrellas and some without.

“Next I rushed to Lanang Police Station and was again met with the same scene where the queue was snaking all over the car park. As in the CPS, here policemen were stationed all over standing in the rain trying to direct human traffic,” she said.

In the midst of this pandemic where social distancing and strategic lockdowns are being highlighted constantly, she pointed out she failed to see the logic in making it compulsory for police to be involved in this physical issuance of permits in order to go to work.

She opined that a simple letter from the employer of essential services given to the employee to show to policemen, if questioned, was sufficient.

“Or instead of physically cramming the police stations in Sibu with as many ‘bosses’ as possible, wouldn’t a simple letter or a simple form to be filled online?,” she asked.

“To put so many lives at risk (as there were no social distancing) just to satisfy the unreasonable need to physically apply for a police permit to work for three days truly is beyond comprehension.”

Lau hoped that if the MCO is extended in Sibu, the police permits would be automatically renewed without requiring applicants to resubmit their application.

Yesterday, Bukit Assek assemblywoman Irene Chang said in a post on her Facebook that she had contacted the Sibu Division Disaster Management Committee and proposed the permit application online.

“The police could also decide on applications to be approved or rejected online immediately. I hope this proposal with gets attention from the authorities, concerned”,” Chang said.