Tuesday, July 5
You are at:Home»News»Sarawak»Fatimah: Temporary transit centre for the homeless reactivated in Sibu as MCO extended to Feb 14 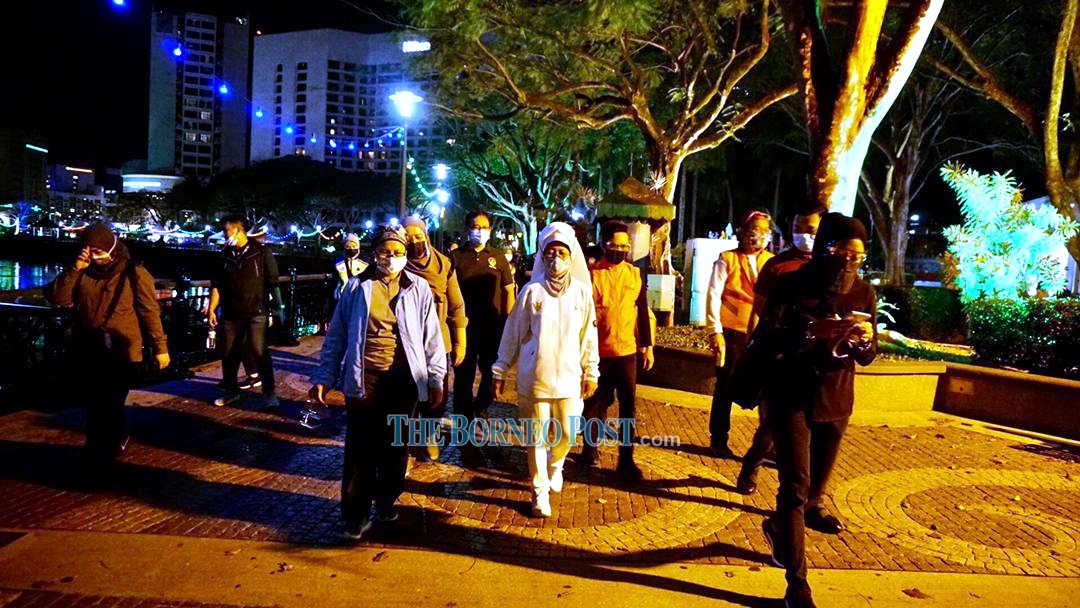 Fatimah (front row, second right) walking along Kuching Waterfront during the survey carried out last night to help homeless people in hotspots around the city.

KUCHING (Jan 28): A homeless temporary transit centre in Sibu has been reactivated to place the homeless there throughout the Movement Control Order (MCO), said Dato Sri Fatimah Abdullah.

Sibu is undergoing the MCO following a Covid-19 outbreak there from Jan 16 to 29, which was then extended until Feb 14.

Fatimah, who is the Welfare, Community Wellbeing, Women, Family and Childhood Development Minister, said the government rest house was used as the transit centre.

“We have reactivated the homeless temporary transit centre in Sibu, which is at a government rest house. We will place the homeless we rescued there.”

“This is because during the MCO, no one is allowed to freely move about, and the homeless placed there can stay there until the end of MCO,” she told a press conference prior to a homeless survey operation last night.

She added that food and other basic necessities were also provided at the transit centre and all of them brought there will have their health screened.

“As a caring society and government, we want to ensure that no one is left out from getting the attention they need so that they can enjoy life where their welfare is taken care of.”

Meanwhile, Fatimah said that a location has been found for setting up of a homeless temporary shelter in Kuching, and the department is currently in the process of writing a proposal paper.

It will enable the homeless to have a place to sleep, wash themselves, wash their clothes, get a free meal, and has a consultation area for health screening and counselling, she said.

The homeless transit centre which was first set up in Sibu was supposed to be ready next month, but was delayed due to the MCO.

“The centre is still being renovated and once ready, it will provide a place for the homeless to sleep at night, and during the day, they can go wherever they want to, like work or others,” she said.

At the same time, she also encouraged the public to help the homeless by donating food, clothing or other necessities.

Among the reasons why a person becomes homeless are family problems, having no place to live, alcohol and substance addiction, loss of employment and mental health problems, she said,

During the MCO last year, 145 homeless people were identified, with Sarawak having the third highest number of homeless people rescued. Of that figure, 79 were placed at six homeless temporary homeless placement centres in Sri Aman, Sarikei, Sibu, Bintulu, Miri and Limbang.

Previous ArticleCaring for the homeless in other ways, Welfare Dept hands out food and sleeping bags to those who prefer freedom over transit centres
Next Article Puncak Borneo to have 98 pct telecommunication coverage soon