Tuesday, May 24
You are at:Home»News»Crime»Man claims that ‘voices in his head’ made him break glass entrance of MJC bank 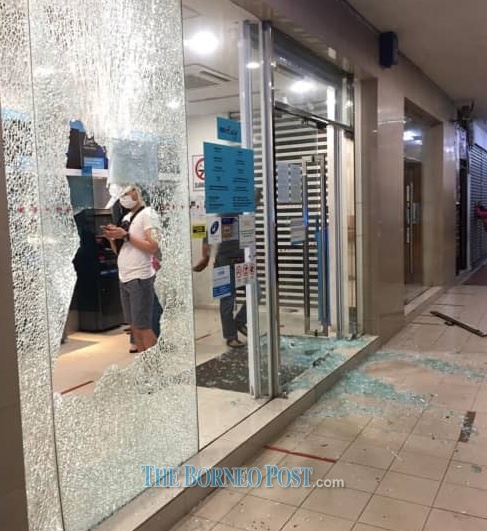 The smashed glass entrance of the bank.

KUCHING (Feb 5): A 34-year-old male suspect claimed that ‘voices in his head’ led him to break the glass entrance of a bank in MJC Batu Kawa around 9.30pm last night.

Padawan district police chief Supt Aidil Bolhassan said the suspect, who was drunk during the time of arrest, also claimed that he has a mental health problem.

“However, his patient card from Sentosa Hospital is currently missing and we will put him under remand for further investigation,” said Aidil in a statement today.

During the arrest, police managed to seize two metal rods and one brick from the scene which were believed to be used to smash the bank’s glass doors and walls.

Aidil further revealed that at 5pm yesterday, the suspect from Kota Samarahan also turned up at the Batu Kawa police station claiming that he is a wanted person by the police.

“The suspect who was clearly drunk at that time was told to go back home,” he added.

Meanwhile, initial investigations revealed that the suspect is a homeless person and had been drinking ‘langkau’ since 4pm at one of the commercial shop lot’s stairway in MJC.