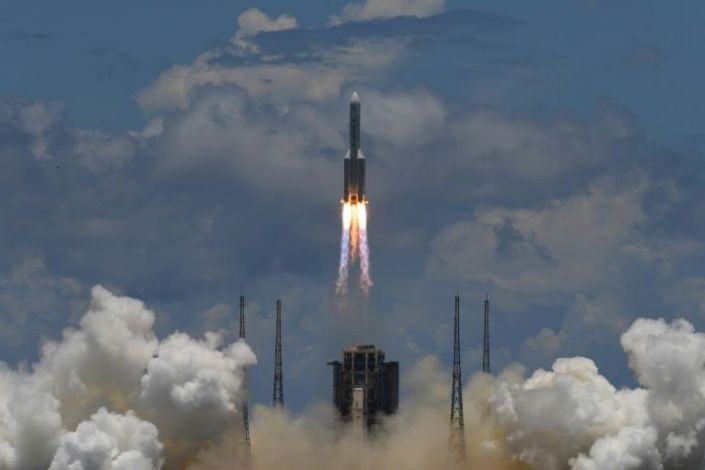 The Tianwen-1 mission to Mars lifted off from southern China’s Hainan province in July — it has now entered Mars’ orbit. AFP Photo

China’s Tianwen-1 probe entered the orbit of the planet Mars on Wednesday, state media said, after it launched from southern China last July.

It is the latest step in Beijing’s ambitious space programme, which aims to establish a crewed space station by 2022 and eventually put a man on the moon, and has opened up a new, extraterrestrial arena for US-China competition.

Tianwen-1 launched around the same time as a rival US mission, and is expected to touch down on the Red Planet in May.

Billions of dollars have been poured into space exploration as China seeks to assert its rising global stature and growing technological might.

If the final landing is successful, Tianwen-1 will make China the first country to orbit, land and deploy a rover on its maiden mission to Mars, Chi Wang, head of the National Space Science Center at the Chinese Academy of Sciences, said in a research note.

“Scientifically, Tianwen-1 is the most comprehensive mission to investigate the Martian morphology, geology, mineralogy, space environment and soil and water-ice distribution,” Chi wrote.

The five-tonne Tianwen-1 — the name of which translates as “Questions to Heaven” — includes a Mars orbiter, a lander and a solar-powered rover.

Scientists hope to land the 240-kilogram (530-pound) rover in May in Utopia, a massive impact basin on Mars. Its orbiter will last for a Martian year.

For the three-month study of the planet’s soil and atmosphere, the mission will take photos, chart maps and look for signs of past life.

The probe has already sent back its first image of Mars — a black-and-white photo that showed geological features including the Schiaparelli crater and the Valles Marineris, a vast stretch of canyons on the Martian surface.

Tianwen-1 is not China’s first attempt to reach Mars.

A previous mission with Russia in 2011 ended in a failure to launch.

Mars has proved to be a challenging target, with most missions since 1960, sent by Russia, Europe, Japan and India, ending in failure.

NASA’s Perseverance, which is set to touch down on the Red Planet on February 18, will become the fifth rover to complete the voyage since 1997 — and all so far have been American.

It is on a mission to look for signs of ancient microbial life and will attempt to fly a 1.8-kilogram helicopter-drone on another planet for the first time.

“Mars is the most similar to Earth,” Jonathan McDowell, an astrophysicist at the Harvard–Smithsonian Center for Astrophysics, said.

“It offers an opportunity to answer key questions about the existence of extraterrestrial life and the origin and evolution of the Solar System.”

China has come a long way in its race to catch up with the United States and Russia, whose astronauts and cosmonauts have had decades of experience in space exploration.

Beijing has already sent two rovers to the Moon — including the first to make a successful soft landing on its far side. — AFP