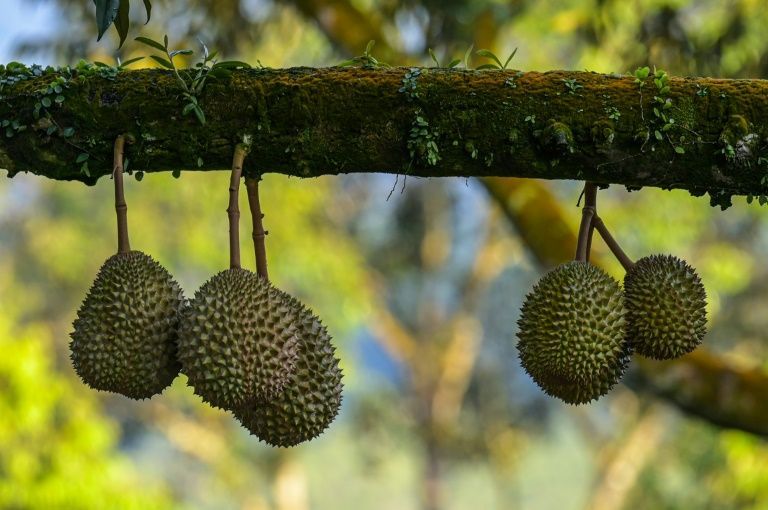 The ‘king of fruits’ is loved by fans for its bittersweet flavour and creamy texture, though critics say it smells like rotting garbage. AFP Photo

Durians falling from trees are collected in nets on a farm in Malaysia, where a long lockdown has slowed domestic demand and left traders more reliant on China’s appetite for the world’s smelliest fruit.

Grown across tropical Southeast Asia, fans love the “king of fruits” for its bittersweet flavours and creamy texture although critics compare its odour to rotting garbage, and it is banned from many hotels and on public transport.

A first lockdown in Malaysia did not do too much damage to demand but a serious Covid-19 resurgence has prompted authorities to re-impose curbs for a longer period, hitting the economy again and hammering the durian industry.

With the roadside stalls where people usually eat the fruits largely empty of customers, sales have plummeted.

“Compared to last year, the local sales are not as good,” Eric Chan, a trader and managing director of Dulai Fruits Enterprise, told AFP.

On the farm in Raub, outside Kuala Lumpur, some of the precious fruits are caught in nets stretched out under trees to ensure they don’t suffer any damage.

Many are destined for China, where the virus emerged but which has largely tamed its outbreak and is once again recording economic growth.

“If there are no exports, or when there is no stock for the export, I think (such a scenario) will collapse the whole industry,” said Top Fruits managing director Tan Sue Sian.

The trade in durians has exploded over the past decade, largely driven by China’s growing appetite, with prices of the once cheap fruit selling for 60 ringgit ($14) or more a kilo.

The fruit was once exported to China only as pulp and paste but in 2019 officials there allowed the shipment of frozen whole fruits, in a further boost to the industry.

Durians can be found in Malaysia at all times of the year, though the fruit has bumper harvests at certain times. — AFP