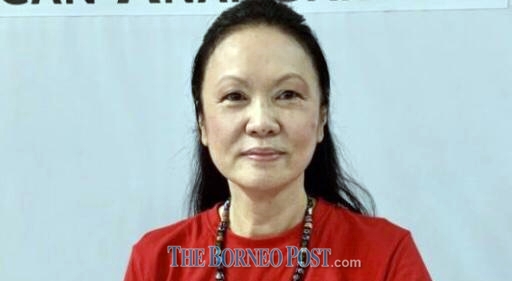 KUCHING (Feb 19): Sarawak People’s Aspiration Party (Aspirasi) president Lina Soo is frustrated with the ruling parties of Sarawak government for failing to solve the perennial problem of flooding and roads that cave in after a torrential downpour.

“Flood mitigation solutions had been announced from BN (Barisan Nasional) times, yet up to today one night of rain can bring flooding problems to homes and road travellers, of which the misery exacerbates when there is King tide,” she lamented in a statement Friday.

“Have the YB’s annual allocations gone up in smoke to deliver the “blue tanks” and now “brown tanks” to the people?

“Are these plastic tanks multi-purpose, to serve the purpose of staying afloat, or even to catch the crocodiles which may come floating in during floods? Is the Sarawak government working on solutions to prevent flooding of our towns and roads in future? ” she questioned.

Soo said she is no engineer, but wondered whether drainage canals could be made deeper, if not wider, to carry the outflow of water faster.

“What about keeping the drainage canals well maintained and unclogged?

“What happened to all those grand schemes for flood mitigation from years back which don’t seem to have materialised?” she asked.

Soo pointed out that people are exposed to having the same problem year in year out when heavy rains come, and that there is no excuse for any government to fail to solve a recurrent structural problem which should not be dismissed as a natural disaster.

“The people are fed up of having to face flooding problems, and do not want to be told to vote to return the same administration to power for progress and development when there is little progress,” she claimed.