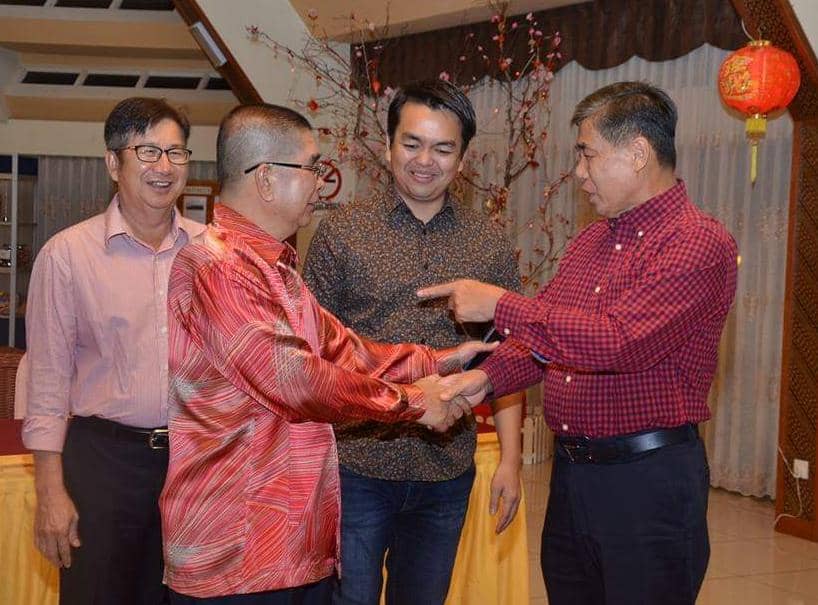 Ongkili shares a tribute for his childhood friend, renowned entrepreneur Datuk Richard Bainon. Photo was taken during one of their school reunions years back.

KOTA KINABALU: Sabah’s renowned businessman, Datuk Richard Bainon, will be laid to rest in his hometown Keningau, today. He was 65.

Described as a ‘genuine one-of-a-kind person’,   his childhood friend Datuk Seri Dr Maximus Ongkili said Bainon’s demise is a great loss to the state and country, especially to the KadazanDusunMurut (KDM) entrepreneurs.

“He is truly a gem among stones. There is no one like him. His approach to business was unique and different from other business groups. He didn’t just develop a business and let it sit as a family asset. Rather, he developed a business, enhanced its assets, created a value chain, reaped its value, and then let the business go as an ongoing concern.

“That was DRB’s strategy in wealth creation,” said the Minister in the Prime Minister’s Department (Sabah and Sarawak Affairs) of his childhood friend.

Bainon, or fondly called DRB by his close friends, owns the RB Pacific Sdn Bhd, which is the operating franchiser of the Big Apple Donuts and Coffee in Malaysia.

Ongkili, in a tribute to Bainon, shared details of their friendship, which went a long way. He recalled him as having a humble beginning, but through determination and willpower, he rose to be a respectable businessman, not just in Sabah, but the country, and even worldwide.

“I remember in 1972, my family moved to Keningau, where I became classmates with DRB at SMK Keningau (now SMK Gunsanad). We were the last Form 5 batch who sat for the Cambridge Overseas School Certificate (OSC), which marked the starting of the Malaysian Schools Certificate (MCE).

“We used to go to his house, which was just seven minutes walk from the school, before adjourning to ‘mandi sungai’ at the Pegalan River. His house was also our gathering spot before going for ‘mitatabang’ (gotong-royong) at nearby villages,” he said.

Ongkili pursued his Form 6 at Sabah College in Kota Kinabalu while DRB took up a job with the Borneo Inscape as an Executive Cadet. Later, Ongkili flew to Australia for higher education while DRB did his degree in the United States of America.

“Upon returning from the USA, he joined the Sedco Group, Industrial Division, together with now Chief Minister Datuk Seri Panglima Hajiji Noor. But DRB was always thirsty for challenges, and he moved to Kuala Lumpur to commence work with Golden Hope Bhd as a marketing executive, and eventually landed the top job as an international marketing manager that took him around the world marketing timber and rubberwood products, including laminated molding and timber flooring,” said Ongkili.

Bainon had vast experiences in marketing and businesses and even ventured into tourism-based sector, including ownership of the Kinabalu Nature Resorts and Mantanani Beach Resort. Both resorts were later sold off as an ongoing concern to the Sutera Resorts Group.

“DRB’s approach to business was unique and different from other business groups. He didn’t just develop a business and let it sit as a family asset. Rather, he developed a business, enhanced its assets, created a value chain, reaped its value, and then let the business go as an ongoing concern. That was DRB’s strategy in wealth creation.

“But to be successful in this strategy, one has to be very sharp, just like DRB, in managing the business, spot on when to go in and out, and well versed in deciphering environmental scenarios. These skills made DRB a scarce stock of the KDM entrepreneurs. Sadly, he left us too early to impart his knowledge and skills with other younger emerging KDM entrepreneurs,” Ongkili wrote in his tribute.

Ongkili said their relationship went beyond friendship, describing Bainon, who often called Ongkili ‘Doc’, as his source of inspiration.

“Personally, for me, as a politician, your words inspire me. Years ago you told me: Doc, you do your service for the people. To me, politics is useful for business networking. We do and fulfill our respective call – to the best that we can.

“His words have always inspired me. He once told me we don’t last long in our success because we boast and talk too much. He never boasted, and even when people asked him of his successes, he would always humbly reply – cukup makan.

“The hallmark of DRB’s business is plain. His success came primarily from smartness and private sector capital. He used to tell me, I made my fortune from the private sector by competing with others in the market. You cannot make a long-term business from politics and politicians.”

Business aside, DRB was also a philanthropist, and was always generous to those in need – students, the poor and low-income families – both in Sabah or   Kuala Lumpur.

Despite being close buddies, Bainon chose to stay out of politics, and according to Ongkili: “He (Bainon) never asked to join PBS, nor did I persuade him to come on board.”

But Ongkil amitted that Bainon was among my strong supporters, stressing that in his words, he said: “Doc, I just want to help propagate what the party stands for that I too personally believe – values that are ngam to me, principled (anti-lompat), multiculturalism and peace for all Malaysians.”

For one who has traveled the world, DRB was always proud to be a Kadazandusun. He was KDCA Klang Valley Founding Chairman and KDCA Coordinator for 13 years. Most of the time, the annual Kaamatan celebration was sponsored by himself or jointly with his business associates.

Ongkili said that it will be difficult to find another like him, but the search continues to find a person that shares Bainon’s determination and willpower to ensure the KDM community and Sabah would prosper and become a greater community and able to compete with the people of the world.

“I know everyone will miss him badly. We all feel the loss of his presence and friendship. But rest assured, he remains in our thoughts and hearts, forever. We pray that God will comfort his family and each of us during this difficult time and increase our faith in the Almighty. Rest in eternal peace, Datuk Richard Bainon. May the Lord bless your soul. Amen,” Ongkili concluded.