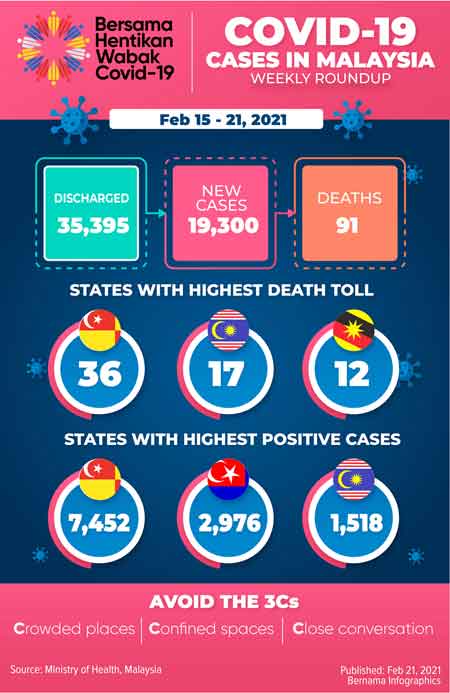 The country’s Covid-19 infection tally now stood at 283,569 cases, he said, adding that the recovery rate remained encouraging, with another 4,456 recoveries reported overnight, taking the tally of those recovered to 249,209 cases.

“The country’s death toll now stands at 1,056 cases, while 209 cases are being treated in the intensive care unit, 91 of them requiring respiratory support,” Dr Noor Hisham said in a statement on Covid-19 developments yesterday.

Dr Noor Hisham said the fatalities involved two cases each in Selangor and Terengganu and one in Kuala Lumpur, all of them aged from 29 to 82.

He said of the new cases, Perak reported the highest number with 1,215 infections, which he said was mostly due to an increase in cases in the Jalan Changkat Jong cluster (1,046 cases), followed by Selangor (868) and Johor (431).

Dr Noor Hisham also said six new clusters were identified yesterday, all workplace-related, which took the number of active clusters in the country to 510.