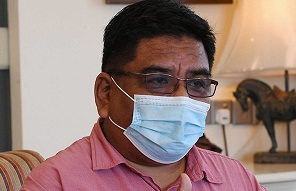 KOTA KINABALU: Sebatik assemblyman Hassan A Gani Pg Amir of Parti Warisan Sabah (Warisan) today announced quitting from the party as he found Warisan giving priority to politics over the well-being of the people.

He said, he is now an independent assemblyman who supports the Sabah Government under Gabungan Rakyat Sabah (GRS), as well as the leadership of Prime Minister Tan Sri Muhyiddin Yassin and Sabah Chief Minister Datuk Hajiji Noor.

“What the country needs today is political stability. This is important to ensure that the government can give its full attention to dealing with Covid-19 and safeguarding the well-being of the people.

“I am deeply saddened to see Warisan which is still seen in tune with Pakatan Harapan (PH) which places priority on politics over the well-being of the people who are burdened with the Covid-19 issue,” he said in an exclusive interview with Bernama here today.

With Hassan A Gani supporting GRS, the coalition of component parties comprising Perikatan Nasional, Barisan Nasional and Parti Bersatu Sabah currently has the support of 48 assemblymen out of a total of 79.

Hassan A Gani said he was very disappointed that Warisan had rejected the Budget 2021 in parliament which to him showed that the party had turned its back on the interests of the people, especially in the effort to address Covid-19.

“All the government’s efforts in addressing Covid-19 need budget allocations. Enough with politics, it is time to look after the well-being of the people,” he said.

He said the actions of the Warisan leadership who turned their backs on grassroots members, including state assemblymen from the party, especially in an effort to voice the interests of the people, also caused him to decide to leave the party.

“I also decided to leave Warisan to serve the people in my constituency. It will be easier to do my job as an independent assemblyman who supports the GRS government,” he said.

He said he made the decision without pressure from any party and believed that the state government under GRS could now serve the people of Sabah. – Bernama