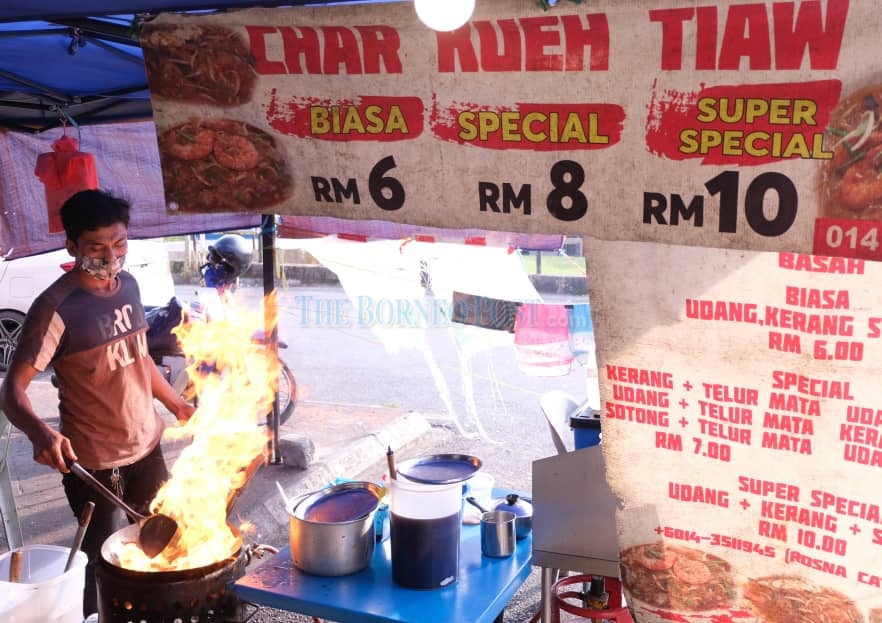 A food operator fries up an order of ‘kuetiau’ at Jalan Demak. – Photo by Rais Sanusi

KUCHING (Mar 1): Dewan Bahasa and Pustaka (DBP), the country’s authority on Bahasa Melayu, has finally resolved the proper spelling of the popular flat rice noodles in Malaysia, which is based on a Chinese dialect.

All Malaysians know what it is when it is mentioned but like the myriad ways the noodles can be prepared, there are many ways it has been spelled, including ‘kuay tiaw’, ‘koay teow’ and ‘kueh tiaw’.

However, in a Facebook post yesterday, DBP announced with an image that the Bahasa Melayu spelling of the noodles is ‘kuetiau’.

Kuching Coffeeshop and Restaurant Owners Association committee member Kapitan Tan Yit Sheng told The Borneo Post that such standardisation of the spellings of the dish’s name was very much welcomed.

“I was not aware that the government body has posted a clarification on the ‘kuetiau’ spellings but I believe it’s a good move, as currently there are many versions of the spellings of the dish name in the market,” said Tan, who operates a coffeeshop at Gala City, Jalan Tun Jugah here.

Thus, he said the government body should create greater awareness on the correct spellings and maybe such standardisation of spellings could be expanded to other dishes, such as ‘kolo mee’, ‘laksa’ and ‘tauhu soup’.

Asked whether he would request his tenants to change to the correct spellings, Tan said he would not force his tenants to do so because they may have to incur additional expenses with the change in the signboard to reflect the latest spellings.

“However, if I do open another coffeeshop elsewhere, I will encourage my tenants to use the right spellings since the DBP has posted the accurate spellings.”

A ‘kuetiau’ seller, who wished to be known as Lai, said having the spellings of the dish name standardised would be able to eliminate confusion among the customers, particularly foreigners and non-Chinese.

“I welcome the standardisation of the spellings so that all customers would not be confused about the dish they are ordering due to the different spellings,” said Lai who operates a ‘kuetiau’ stall at a coffeeshop at Jalan Stutong here.

Lai remarked the convenience of having standardised spellings would outweigh the hassle and he would gladly follow the latest spellings if his stall was to be open at another location.