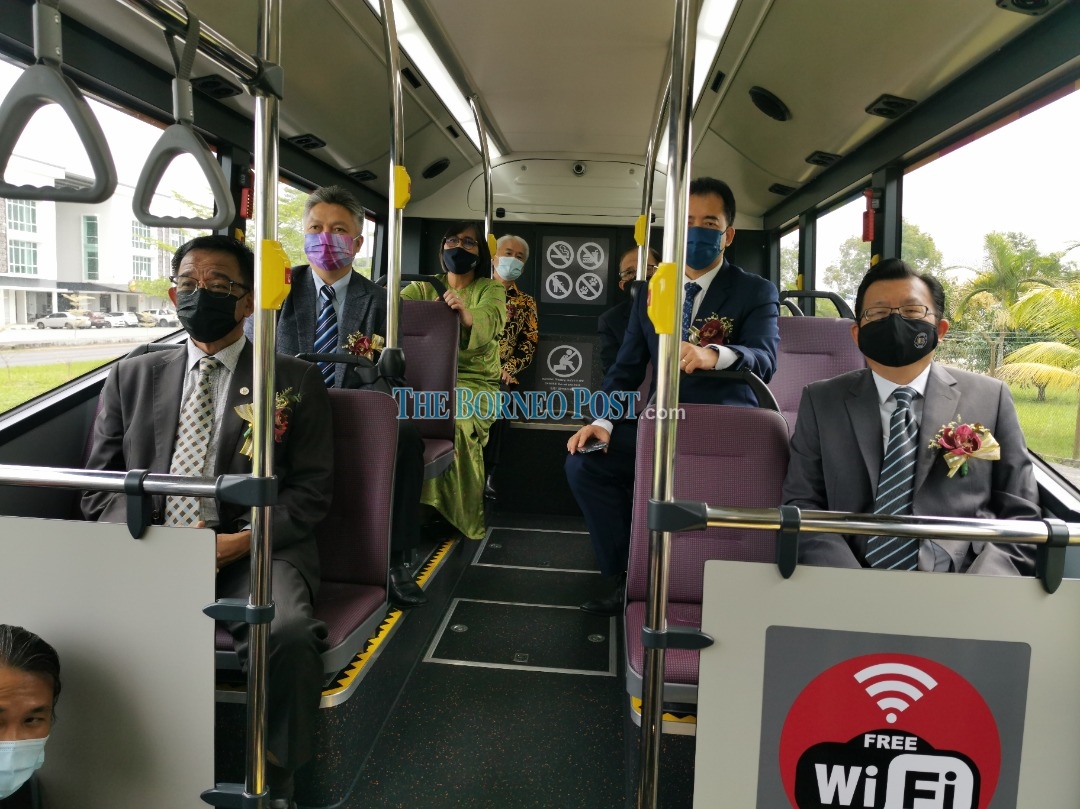 Abdul Karim (left), Snowdan (right behind), Lai (right) and others on board of the electric bus during the launching ceremony today.

Abdul Karim said Sarawak was the first state in the country to offer the electric bus service to both tourists and locals and the idea of free electric city bus service was first mooted by his ministry under the guidance of Chief Minister Datuk Patinggi Abang Johari Tun Openg.

“In order to have free electric city bus service that is punctual, reliable and covering longer routes, my ministry proposed to have four units of new electric city buses to cover longer routes from the original 26 bus stops to 54 bus stops loop from DUN complex to Semenggoh Wildlife Centre,” he said during the official launching ceremony of ‘Kuching Metro Electric City Bus’ at Borneo Convention Centre Kuching (BCCK) here today.

Abdul Karim said the first trial route was back in February 2019 with an electric bus covering 26 bus stops loops from the Old Court House to iCom Square and the service was very well received.

Moreover, Abdul Karim said the initiative of electric bus service was in line with his ministry’s focus on responsible tourism, which the electric city buses using rechargeable batteries could reduce carbon footprint and air pollution.

“In addition, my ministry had launched the Inaugural Publication of Journal of Responsible Tourism Management in collaboration with Faculty of Hospitality and Tourism Management (UCSI University) and Sarawak Research Society (SRS) to further create awareness and insightful research information on responsible tourism on Feb 2 this year.”

Besides that, Abdul Karim said the focus on responsible tourism was also in line with the ‘Sarawak Economic Action Council Tourism Aspiration’.

“By 2030, Sarawak will be a leading destination for eco-tourism and business events in the Asean region driven by empowered communities to conserve heritage, culture, biodiversity and to promote investment and development through responsible actions,” stated the aspiration.

It is hope that the electric bus service could one day be expanded to other major cities, such as Sibu, Miri and Bintulu, Abdul Karim added. 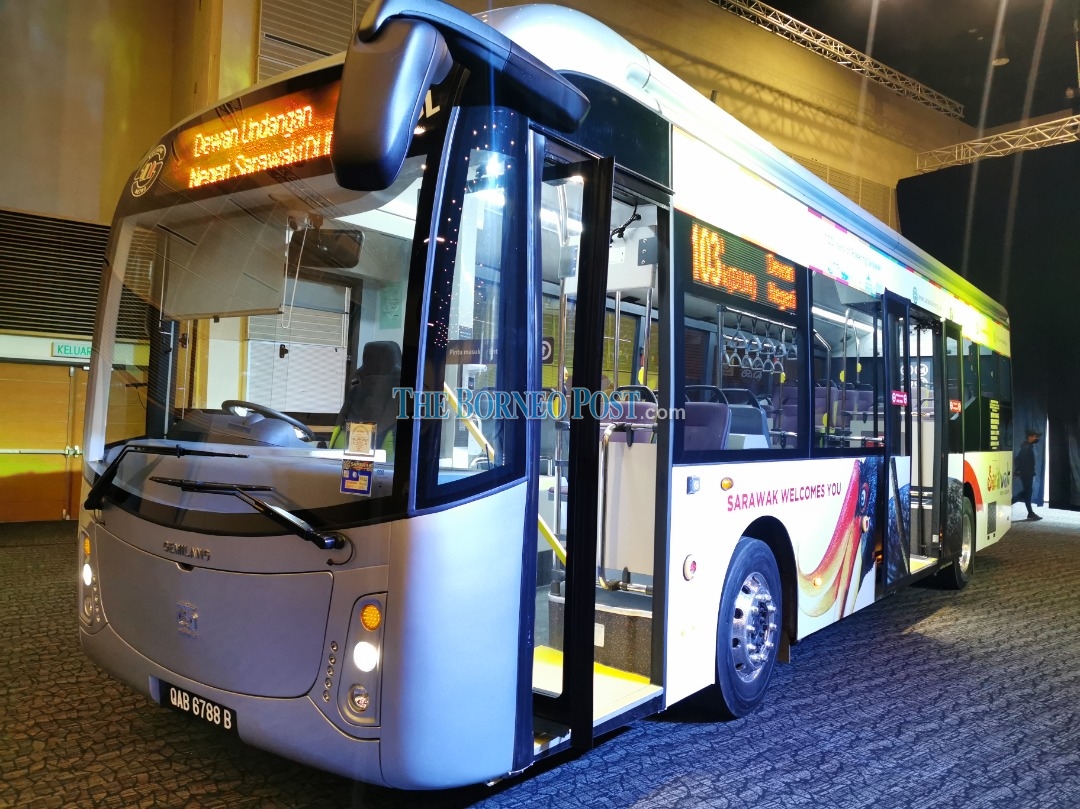 Abdul Karim added a contract had been signed for the introduction of the electric bus service and the state government will evaluate the service ridership during the contract period before deciding whether to continue with the service.

Meanwhile, Henry Lai, the managing director of Henz Pacific Sdn Bhd that manages the electric bus service, said a batteries life span for an electric bus can last for at least eight years and the battery sizes were getting smaller with the advancement in technology.

“The standard practice for an electric bus batteries is once the batteries capacity dropped 20 or 30 per cent, the batteries have to be replaced and this used batteries can still be used to power homes or even for Sarawak Alternative Rural Electrification Scheme (Sares) project in Sarawak,” said Lai during the launching ceremony.

Providing an example, Lai said a used 300kwh batteries after 30 per cent reduction in its capacity would still store 210 kwh of power, which was sufficient to power around 30 to 35 doors under the Sares project and the batteries was usable for another five to 10 years before being send for recycle.

On a separate note, Lai remarked the state-owned utility company Sarawak Energy Bhd had been very supportive of the electric bus service and there were common objectives that could be explored for both parties for the better of the local public transportation system.

Members of the public could download a mobile application called ‘Kuching Metro’ to have real time monitoring of the location of the bus and the estimated timing of bus arrival.

The four buses serving the routes from DUN complex to Semenggoh Wildlife Centre has an estimated interval time of two hours per bus. The earliest departure of the bus is at 6am and the latest being 4pm.

Previous ArticlePrivate hospitals want to get vaccines to help in Covid-19 immunisation
Next Article Sarawak PKR has many leaders who can replace Sng as state chief, says youth wing