Friday, July 30
You are at:Home»News»Sabah»Food delivery rider dies after accident 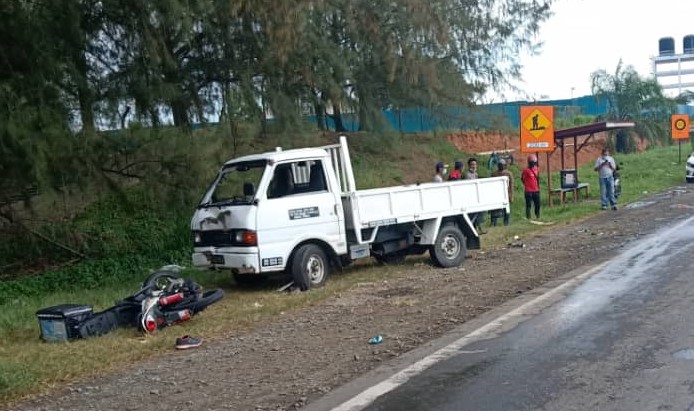 The victim’s motorcycle and lorry at the scene of the accident at Km 6, North Road on Tuesday.

TAWAU: A 22-year-old food delivery worker succumbed to his injuries and died at the hospital after his motorcycle was involved in an accident with a lorry at Km 6, North Road on Tuesday.

District police chief ACP Peter Ak Umbuas said in the incident that happened at about 3.10 pm, the lorry driven by a 28-year-old man was on its way from Taman Muhibbah Indah towards Kampung Sin San, Pasir Putih and upon reaching the scene, he suddenly hit the brakes as the lorry skidded on a wet and slippery road due to rain.

On Tuesday at around 3.30 am, he said the police received a notification from the medical officer informing that the victim identified as Mohd Azman bin Ashabu had died. He suffered injuries in the right leg and bleeding in the abdomen.

Peter said preliminary investigation by the police found that the incident was due to negligence of the lorry driver who lost control of the vehicle while braking causing the truck he was driving to slide into the opposite lane and collided with a motorcycle coming from the opposite direction.

He added the lorry driver was detained to assist in the case investigation that was transferred from Section 43 to Section 41(1) of the Road Transport Act 1987 after the victim was confirmed dead.