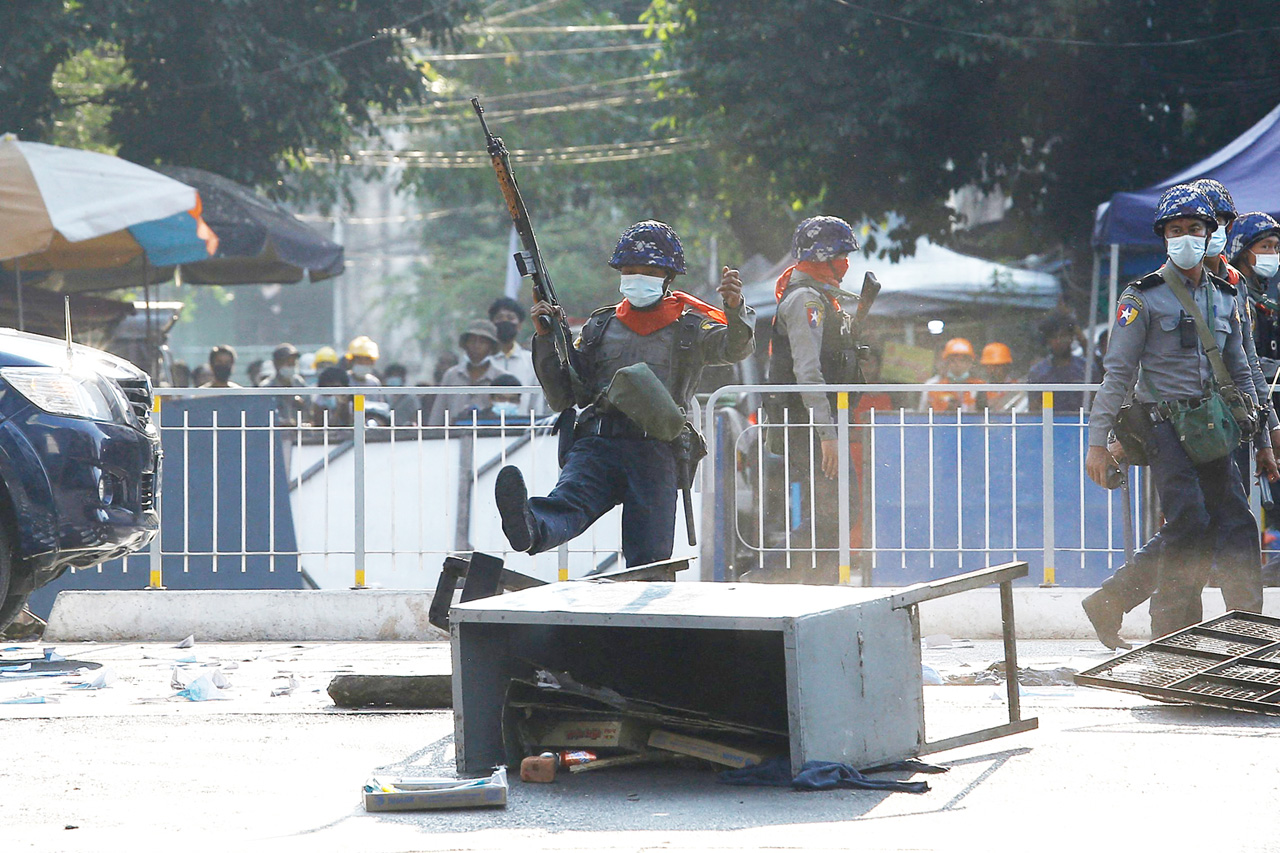 A policeman kicks part of a barrier set up by protesters on a road during a demonstration against the military coup in Yangon. — AFP photo

Myanmar has endured mass protests demanding the military release civilian leader Aung San Suu Kyi, who was detained on Feb 1 at the start of the coup.

Authorities have in response steadily stepped up its use of force, with tear gas, water canon, rubber bullets and, increasingly, live rounds.

Sunday was the bloodiest day since the Feb 1 coup, with the UN saying that at least 18 protesters were killed across the country. AFP independently confirmed 11 deaths.

In the northwestern town of Kale yesterday, another rally turned violent when security forces opened fire on protesters, according to medics who witnessed events and treated those wounded.

“About 20 people were injured in a morning crackdown by police and soldiers in Kale,” said a rescue worker, on condition of anonymity for fear of repercussions.

“Three… were hit by live rounds and are in critical condition,” he said, adding that police had initially deployed tear gas and rubber bullets, before doubling back with live rounds.

A doctor who treated the patients in a local hospital confirmed the number of people in critical condition.

“His condition is a concern — we do not like it.”

The bloodshed came the same day as the funeral was held in Yangon, the commercial capital, for a 23-year-old student who died Sunday.

The mourners sang a revolutionary song as the coffin carrying Nyi Nyi Aung Htet Naing was taken to an altar.

“No mercy, just bullies — dead bodies are here and there,” the mourners sang in unison as they flashed a three-finger salute. “Oh the brave heroes who died for democracy.”

In San Chaung township — which saw crackdowns in recent days — hundreds of police came out in force.

“They used tear gas and shooting as well,” said one resident who could not tell if the security forces had deployed rubber bullets or stun grenades.

The continued unrest as foreign ministers from 10-member Association of Southeast Asian Nations bloc were due to meet virtually, including a Myanmar representative.

Ahead of the meeting, some regional powers broke with diplomatic traditions and issued unusually harsh rebukes to Myanmar’s junta.

“We are appalled by the use of lethal force against civilians,” Singapore’s Foreign Minister Vivian Balakrishnan told the city-state’s parliament Monday.

“We call on the Myanmar military authorities to exercise utmost restraint,” he added, while urging a ‘return to the path of democratic transition’.

As Myanmar’s biggest foreign investor, the prosperous city-state is seen has having some leverage over the generals.

One diplomat told AFP the ministers will likely “ask the Myanmar military to stop the violence and attacks against the people”.

But observers are sceptical about what difference the bloc can make — pointing to its policies of non-interference and making decisions based on consensus.

Since the 1 putsch, the junta has tightened its chokehold on communications, imposing nightly internet shutdowns and blocking certain social media websites.

More than 1,200 people have been arrested, charged and sentenced, according to Assistance Association for Political Prisoners monitoring group, of which some 900 are still behind bars. — AFP