Sunday, April 18
You are at:Home»News»Sabah»Amri provides guidance for youngsters – Rawilson 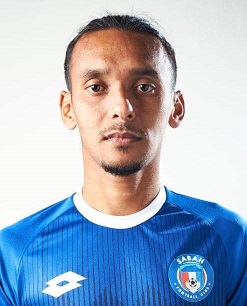 Rawilson said despite wearing the captain’s armband, he has huge respect for the former international due to the vast experience that Amri has, he would also be able to provide guidance to the youngsters in the squad.

“He is a very experience players and is one of the big names in the country’s football scene…surely we want to learn from him as much as we can.

“Apart from that, we are very confident that he can still make the difference on the field despite his age…he has been showing it during training session,” he said on Thursday.

Amri, 40, is one of the two new local imports that Sabah have signed this season along with N. Thanabalan.

And Amri is almost certain to start in the Super League season opener away to Malacca United FC, especially with the squad expected to be still without the services of the four new foreign imports.

Meanwhile, Rawilson expressed hope that the Rhinos would be able to improve on their 10th place finish in the league last season.

He said with the addition of the new faces, the squad under head coach Kurniawan Dwi Yulianto would be able to mount a strong challenge in the country’s elite league.

“Our preparation is much better than last season having played also in several pre-season matches.

“Last season was different because of the Covid-19-disrupted campaign…we only played 10 league matches.

“That is why I think we can do better this season and I personally hoped we can be in the top five.

“Having said that, the most important thing is that we promise to give our utmost best un every match that we play,” he said.

He said while the squad could go into the game with his central defensive partner Park Tae Su as the only foreign import, it would will not stop them from going all out on the pitch.

“We are all eager to get onto the field and play football. Hopefully we will be able to get the desired result in the away tie,” said Rawilson.