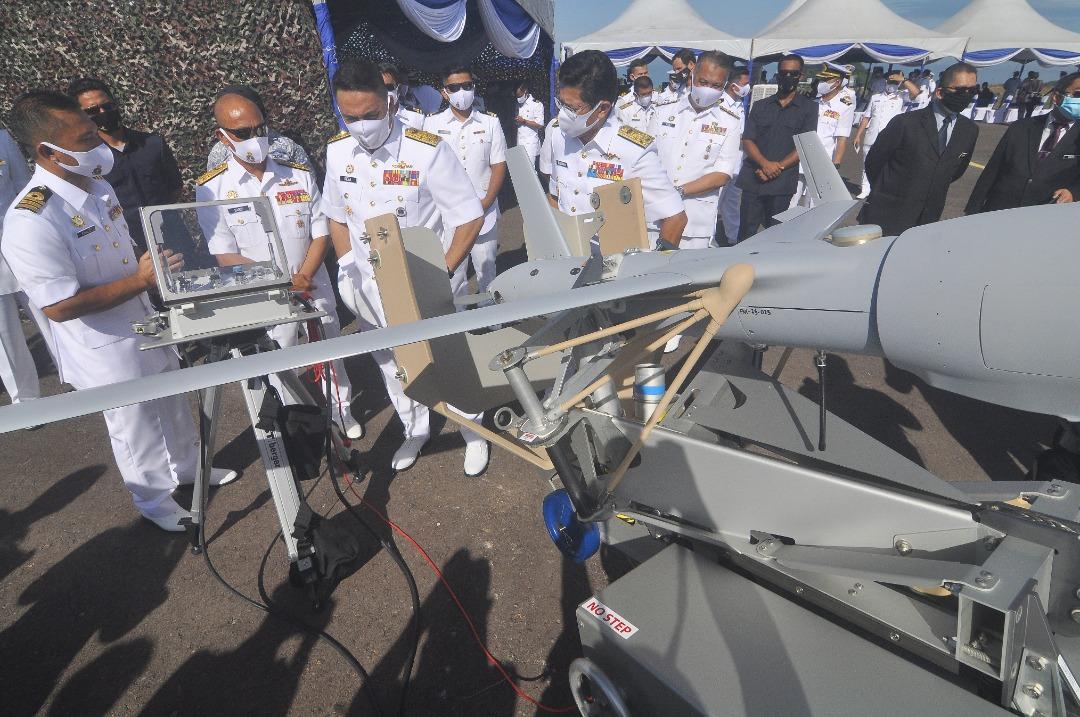 Mohd Reza (third left) being briefed by Navy officers on the UAS ScanEagle during the launch of 601 Squadron at the Sepanggar Naval Base today.

The ability of the aircraft, which provides real time data and requires minimal crew involvement, can increase the RMN’s ability in carrying out intelligence, surveillance and reconnaissance missions in high-risk waters in Malaysia.

“The operation of this ScanEagle aircraft is the first unmanned aircraft operation by the Malaysian Armed Forces.

“The operation of the UAS system will open a new chapter in the dimension and doctrines of our military defense and will pave the way for the use of UAS technology in our military capability in the future,” he said at the launch of the  601 Squadron UAS ScanEagle system at the Sepanggar Naval Base today.

Mohd Reza said the RMN plan is to acquire more UAS ScanEagle which can enhance their military and security system in the country.

“At this moment, we will operate the  UAS ScanEagle on land as we need to  familiarise ourselves with this new system before we move it onto our ships and vessels for real-life operations,” he said.

Mohd Reza said although the UAS ScanEagle is under the RMN, it can also be used to assist their other military forces.

“There is no constraint in using this system to assist our military counterparts, namely the Malaysian Army and the Malaysian Maritime Enforcement Agency, to enhance security of our nation,” he said.

Meanwhile, Muhammad Muzzafar said the US government will deliver 12 aircraft to Malaysia by this year.

“We also have two  CN235-220M (M44-05) tactical airlifter  that are currently being modified with surveillance  packages in  Indonesia,” he said.

The UAS ScanEagle is a Boeing-Insitu aircraft built by the US government for Malaysia through the Maritime Security Initiative (MSI).

The system was first accepted by the RMN on May 6, 2020 which includes six aircraft, two launchers, two skyhook and three ground-control-station (GCS) worth RM180 million.

The 601  Squadron made  history as the first UAS Squadron to be operated by the Malaysian Armed Forces.

The operation of UAS will provide the RMN with added advantage in terms of intelligence, surveillance and reconnaissance throughout Malaysian’s waters as well as increase Maritime Domain Awareness (MDA).