Sunday, June 13
You are at:Home»News»Sabah»Rhinos banking on ‘Plan B’ against Melaka United 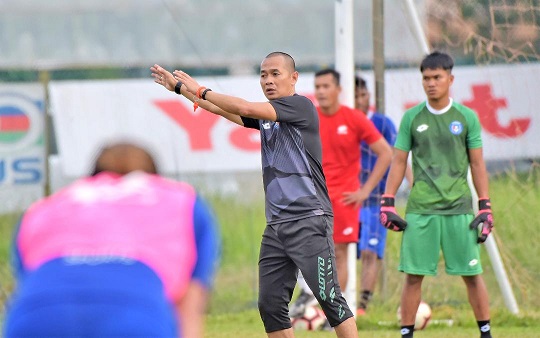 Kurniawan stressed that his players should enter the field with full confidence and collect three points from the match.

KOTA KINABALU: Sabah FC have to rely on ‘Plan B’ when they face Melaka United in the first Super League 2021 match at the Hang Jebat Stadium in Melaka today, Mar 6.

Head coach Kurniawan Dwi Yulianto said they have to rely on Plan B as the team is without their new four import players.

Three of the players are said to have arrived in the country but are currently undergoing quarantine while the fourth player is in the process of entering the country.

To be eligible to play, all import players must get approval from the National Security Council (MKN) and the Malaysian Ministry of Health (MOH).

The four import players were said to have signed contracts with Sabah FC early last month but were unable to enter the country earlier due to strict the documentation and procedures during the Covid-19 pandemic.

With only one import player, South Korea defender Park Tae Su who was retained from last season’s squad, Sabah FC will have to face a mighty Melaka United squad with five import players.

Kurniawan said it is normal for any team around the world to struggle in their first match but for Sabah FC, the challenge on Saturday (Mar 6) is to play without their four import players.

“We have to rely on ‘Plan B’, that is playing without our four new import players, which we had been preparing for the past week.

“I hope our Plan B will go as planned,” he said before the team left for Melaka Friday morning.

Kurniawan added that not only supporters but everyone in Sabah FC were expecting their new import players, but stressed that it is something that they do not have to stress about but to focus on their games.

Although it looks like an impossible task, without the four import players, Kurniawan said they will not give up that easily but will face the challenge head-on.

He said without their import players, it will somehow give an added advantage and motivation to their local players to perform.

“We will play with the majority of our local Sabahan players. This will give them the opportunity to show what they are capable of.

“We have to understand our strength and weakness as well as of our opponent.

“This is no longer a friendly match, we are heading into ‘battle’ so we need to be realistic and careful in making our move,” said Kurniawan, who refused to name his 11 of 20 players for the coming match.

Kurniawan also stressed that his players should walk out to the field with full confidence that they could collect three points after the match.

“We are not aiming for a draw, we want to win and win every game, this is something that we have engraved in our players head. Anything can happen in football,” he said.

For the record, Sabah won 3-2 against Melaka at Likas Stadium in the single round Super League competition last season.

The match will kick-off at 9pm without the presence of any supporters.