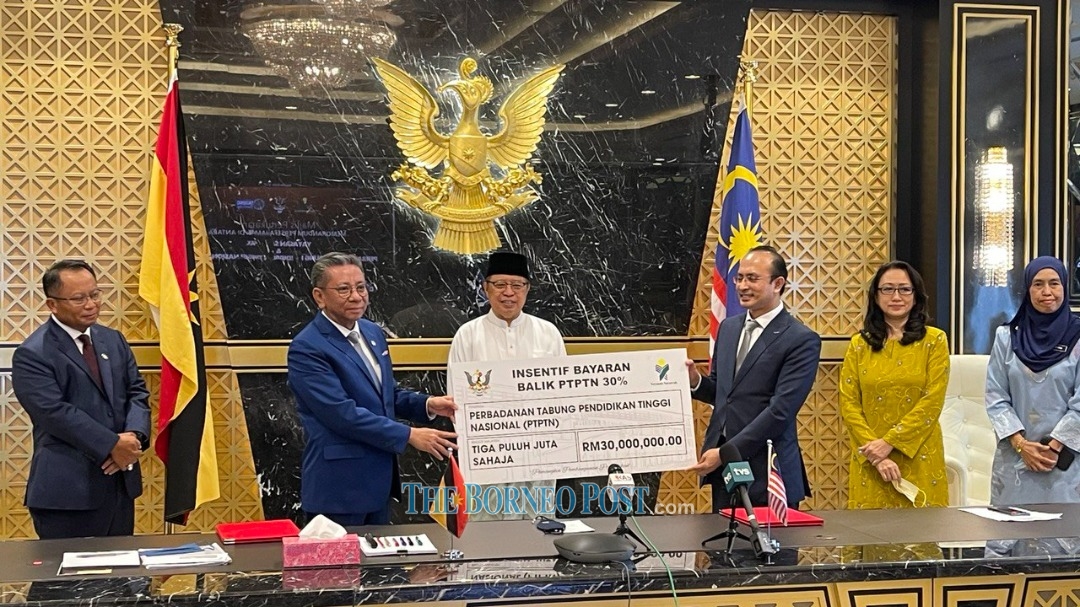 Abang Johari (center) witnessing the symbolic presentation of a mock cheque from Azmi (second left) to Ahmad Dasuki (second right) at the ceremony.

KUCHING (March 5): Chief Minister Datuk Patinggi Abang Johari Tun Openg has expressed his hope that the collaboration between the National Higher Education Fund Corporation (PTPTN) and Yayasan Sarawak can assist Sarawakian students to repay the arrears of their PTPTN loans.

He asserted that the collaboration would also produce something that could ease the burden of students from debts in their pursue of getting better education.

“The cooperation between the two parties is regarding the issue of loan repayment of Sarawakian students who have been successful in their studies but are facing problems in repaying their loans.

“I have been looking for ideas on how to help alleviate their burden in terms of loan repayment and I have decided to appoint Yayasan Sarawak to work with PTPTN on this matter,” he added.

Abang Johari said the state government through Yayasan Sarawak has allocated RM30 million as a start to assist the students in repaying the students’ loans.

“However, for those who have obtained a first class Bachelor’s Degree, their loans will be turned to scholarships.

“This assistance from the state government to Sarawakian students will be based on the Yayasan Sarawak’s processes as they have experience and that they also provide loans to our students,” he added.

A statement from the Chief Minister’s Office (CMO) said this was done as promised during a town hall session held in Kuala Lumpur in 2019, where he had kept his promise to assist students from Sarawak to pay some part of their loans with PTPTN.

Ahmad Dasuki, who praised the state government’s effort, said the initiative was a proactive effort as Sarawak has the only state government that has acted in such a way by allocating a large sum for the effort.

“This effort is also seen as very appropriate especially during a time when the people’s income and finances are affected due to the Covid-19 pandemic that struck the country,” he said.

For Sarawak as of Dec 31 last year, he said the PTPTN loans have been given to a total of 195,350 borrowers involving a sum of RM4.7 billion.

He said there were also PTPTN borrowers who were exempted from making repayments because they obtained a First Class Bachelor’s Degree, involving a total of 3,429 borrowers with an allocation of RM88.7 million.