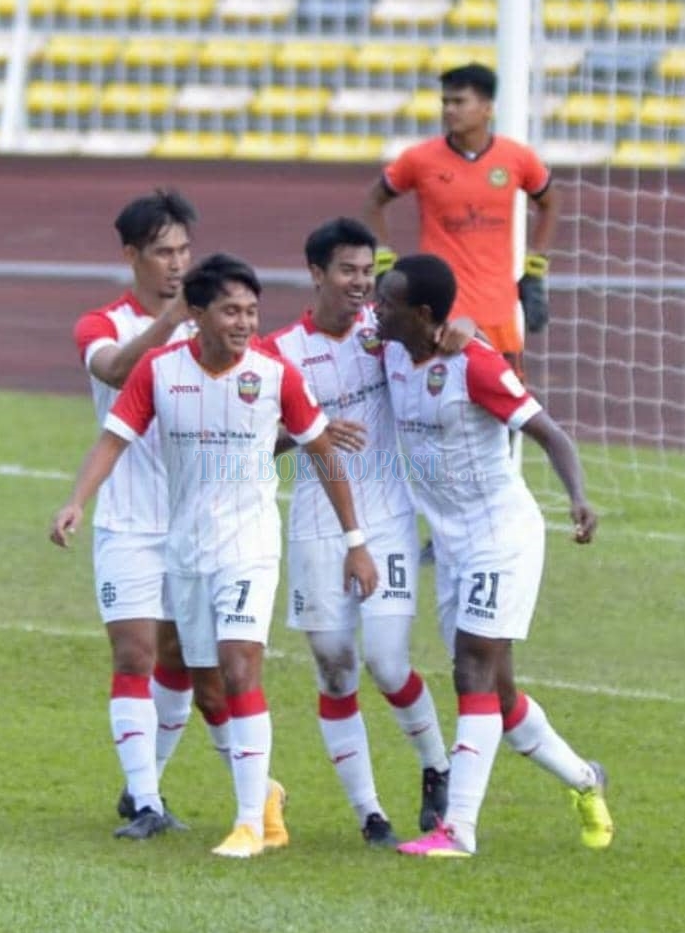 Uche (right) celebrating with his teammates after scoring a goal for the Golden Hornbills against Perak FC II in Ipoh yesterday. – Photo courtesy of Sarawak United

KUCHING (Mar 11): Sarawakian teams competing in the Premier League remain undefeated so far after Sarawak United and Kuching City FC registered a win and draw respectively in their matches yesterday.

With both teams playing away fixtures, Sarawak United registered a comfortable 3-0 victory over Perak FC II in Ipoh while Kuching City FC held on to a 1-1 draw in Kuala Terengganu.

During the match between Sarawak United and Perak FC II, it was a brace from Uche Agba and a goal by Sarawak United new star signing Norshahrul Idlan that helped earn the Golden Hornbills the three points.

“We managed to win today because have experienced players playing for us and we did well to secure the three points despite playing the match in the evening and only three days after our previous match.

“With our opponents Perak FC II lacking the presence of an import player, it more or less gave us the advantage to win the match too,” said Sarawak United head coach E Elavarasan.

Elavarasan, nevertheless, opined that he expected the Golden Hornbills to walk home with the three points after facing a Perak FC II team who fielded mostly young players.

It was Sarawak United’s second win of the season following their 2-0 victory over Kelantan United on Sunday.

Sarawak United’s next Premier League match will be against their crosstown competitors Kuching City FC scheduled for on March 16.

Meanwhile Kuching City FC came from behind to scrap a 1-1 draw against Terengganu FC II in Kuala Terengganu in their first league match of the season, last night.

Terengganu FC II scored first in the 20th minute of the match, Kuching City FC managed to equalise 10 minutes later via a header from Hairol Mokhtar.

With the draw, Kuching City FC will have to work harder in their next league match against Johor Darul Ta’zim II this coming Saturday (May 13) if they want to keep their hopes for Super League promotion alive.

Sarawak currently have two teams playing in the Malaysian second division Premier League this season, namely Sarawak United and Kuching City FC and both teams have set a target to qualify for next season’s Super League.