Friday, September 17
You are at:Home»Entertainment»First UK trailer for ‘Edge of the World’ drops (Video)

KUCHING (March 17): The first UK trailer for ‘Edge of the World’, the upcoming Hollywood feature film on Sir James Brooke, has been released.

More than a year after the film was shot entirely on location in Sarawak, audiences in the United Kingdom will be among the first countries to watch Hollywood actor Jonathan Rhys Meyers bring life to the historical character when the movie is released on digital platforms in the UK on June 21.

The two-minute trailer takes audiences back to the 1800s as Meyers, in a voice-over, wondered if he had gone far enough to the other side of the world as the scene shows Brooke arriving at an island and exploring the jungles with Colonel Arthur Crookshank (played by Dominic Monaghan).

He soon discovers that the island of Borneo he had sailed to was a tropical paradise as the clip gives a glimpse of several scenes depicting the beauty and culture of Sarawak as well as the engaging and suspenseful drama and action from Brooke helping the Sultan of Brunei crush a pirate rebellion.

“This UK trailer invites audiences to explore the exotic beauty, culture and adventure of Sarawak through the journey of Sir James Brooke whose real-life exploits inspired classic epics like ‘Lord Jim’, ‘Apocalypse Now’ and ‘The Man Who Would Be King’,” producer Rob Allyn told The Borneo Post. 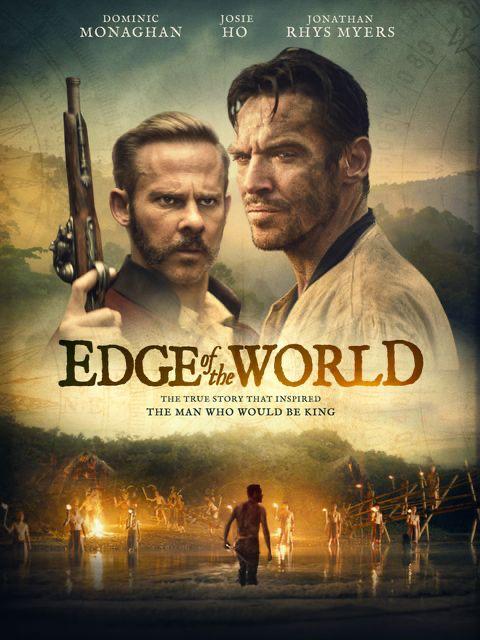 Edge of the World’s poster for the UK.

He said leading British distributor Signature will be releasing ‘Edge of the World’ in the UK where it will be available digitally and via DVD and other streaming platforms “regardless of where things stand with the Covid-19 pandemic effect on cinema openings.”

“We are also pleased to announce the planned United States release of ‘Edge of the World’ by Samuel Goldwyn Films is scheduled for June 4.

“The film will be released in US cinemas (depending on the Covid-19 situation) as well as streaming on all digital platforms to rent or own such as iTunes, Amazon and so on,” he said.

Allyn also said that negotiations are underway with major distributors in Malaysia for the release of the film in the country.

“We are currently in negotiations for the release of ‘Edge of the World’ for release in Malaysia both theatrically in cinemas and on major streaming, digital and home entertainment platforms later this year.

“This also depends on where Malaysia stands in regard to the Covid-19 pandemic and cinema attendance,” he said.

Originally titled as ‘Rajah’, the film was given a title change recently to appeal more broadly to audiences who may be unfamiliar with the term ‘Rajah’.

‘Edge of the World’ was made with the support of Sarawak Tourism Board and the Film in Malaysia Incentive’s rebate on Qualifying Malaysian Production Expenditure.