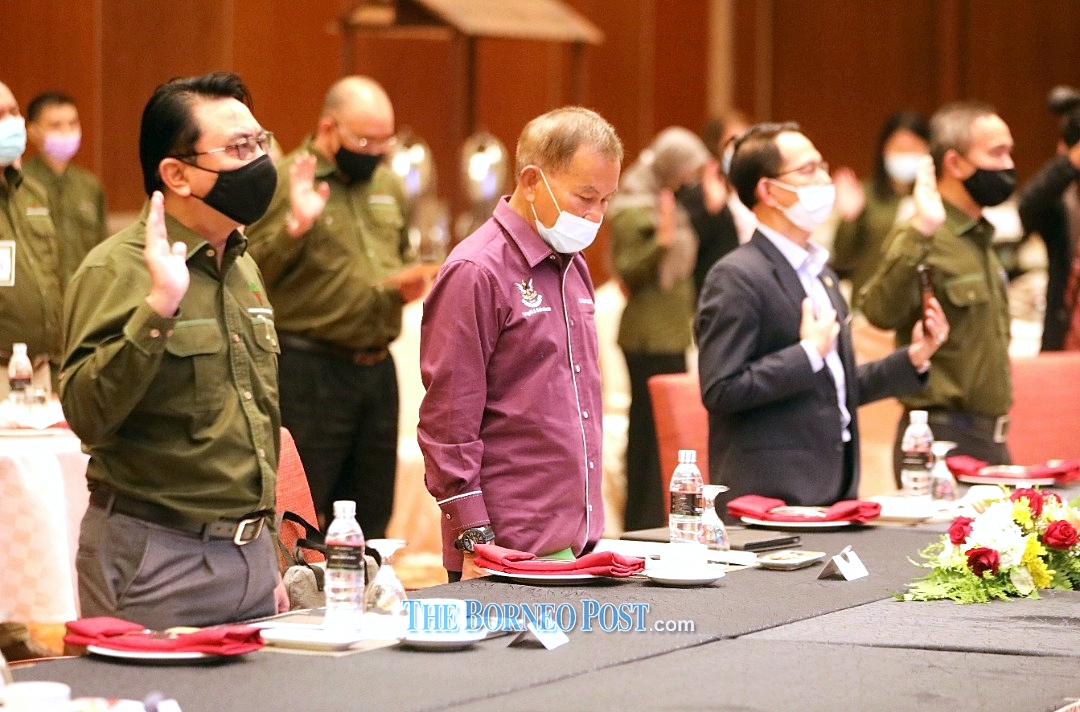 Hamden (left) and other staff members of the Sarawak Forest Department pledging to refrain from partaking in corruption during the ceremony officiated by Talib (centre). Photo by Chimon Upon.

KUCHING (March 17): Sarawak Forest Department has published its Organisational Anti-Corruption Plan (OACP) for the year 2021 to 2025 to combat corruption activities within its operations.

During the plan’s pre-launching ceremony at a local hotel here today, department director Datu Hamden Mohammad said they had undertaken various programmes and strategies to spread awareness on the peril caused by corruption.

“As a measure moving forward, Sarawak Forest Department has declared war on corruption activities, particularly within the logging sector and timber industry,” he said during the pre-launching ceremony that was held in conjunction of the department’s Integrity Day today.

Hamden remarked it was sad there had often been news highlighting corrupt public servants being arrested, which had badly tainted the perception of the civil force among the public.

Since taking over the post to lead the department, Hamden said he had strived to strengthen the culture of high integrity among his staff members and to utilise advanced technology to bring greater achievements to the department.

“The department has been encouraging license holders to communicate with them via online platforms to minimize face-to-face interactions that could lead to unwanted misunderstandings and unacceptable behaviours.”

Hamden pointed out the department was the first state department to sign the free-of-corruption pledge in December of 2014, that was implemented simultaneously with other forestry agencies, license holders and contractors in the state.

“As part of our restructuring exercise, the state government had also instructed the Sarawak Forest Department on Jan 2 last year to carry out all functions of the management and forestry operations as the way it was outlined in the Forest Ordinance 2015.”

Aside from the OACP documents, Hamden said a few Certified Integrity Officers will be stationed inside the department and all staff members will have to renew their pledge towards anti-corruption before the department’s director every year.

Meanwhile, Minister in the Chief Minister’s Department (Integrity and Ombudsman) Datuk Talib Zulpilip, who was present during the ceremony, said the timber premium collected had amounted to RM1.561 billion for the past five years of 2016 to 2020.

“Aside from being a revenue generator to the state, forest preservation is crucially important for the balance of the ecosystem and global climate,” said Talib.

Previous Article202,700 dogs vaccinated against rabies in Sarawak since outbreak in 2017 – DVSS
Next Article Prime Minister to make special announcement at 5.30pm