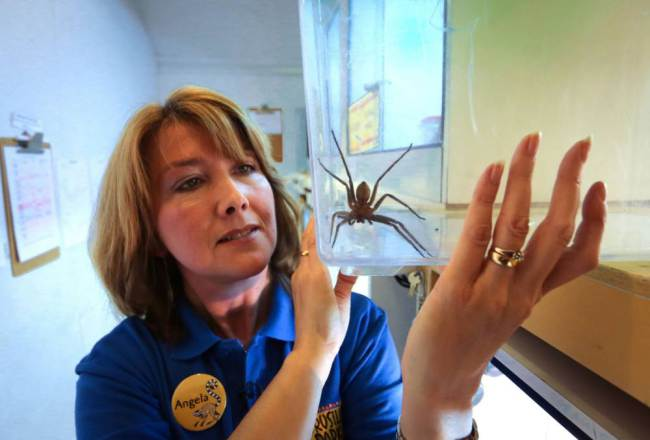 Angela with a Huntsman Spider.

THE forest resonated with the ever-present sounds of the night. The incessant chatter of cicadas filled the air as if to entice the unwary interloper into a futile game of hide and seek. The deep-throated bullfrogs that sat around the rain-filled ponds seemed to have misunderstood the game and constantly revealed their hiding place to the hungry snakes that circled, homing in on their next meal.

On the forest floor the heat was oppressive. The air was saturated with humidity. Tiny droplets of water hung in the air and were picked up by the thin beams from our powerful torches that illuminated our path, as all around us the darkness seemed to be closing in on us. Its mysterious whispers calling us to leave the track. Experience had taught us not to succumb to such temptations however attractive the prize may seem. Losing one’s way in a dark forest can be a costly mistake.

I glanced down at my watch. The dial had misted over but I could still just see that it was almost 2am. A small bead of sweat waited patiently at the nape of my neck deciding whether or not it should begin the journey down my spine. The decision was made for it as I took another step. It rolled down my back. My wife, Angela, was leading the way as she often did. She made her feelings clear by signalling me to be quiet, by putting her finger to her lips and shaking her head. She pointed upwards. As I raised my eyes and peered into the dim light a huge spider came into focus. It was a tarantula that sat about 10 feet above us. It was clearly out of our reach, but I was sure that Angela would not view this as an obstacle for long.

Without making a sound, she slowly removed her rucksack and carefully began to unscrew the lid from a clear plastic pot. Looking up at the spider she quietly signalled me to kneel before her and she clambered awkwardly onto my shoulders to the amusement of our accompanying guide. Angela is quite petite but to stand from a squat position when you are hot and exhausted with merely the instruction “Slowly” seemed a big ask. Never the less, stand I did and as she had rightly calculated it bought her in line with her target. My heart was pounding heavily in my chest, such that I thought it might disturb our quarry. I held my breath, afraid to utter a sound, as Angela slowly hovered the jar over the spider. Then quick as a flash she had scooped it up and, in a single move, screwed the lid on.

The newly-captured prisoner within was not happy. Running frantically around, it finally settled with its front legs resting in a typical threat posture. This however was no ordinary captive. This was a female tarantula and quite possibly a new species. I lowered Angela to the floor. She stared at the spider in the jar, oblivious to my discomfort, and then turned to look at me. I was a quivering mass of sweat. My heart was only just beginning to slow. She smiled and without missing a blink placed the container carefully into her rucksack. 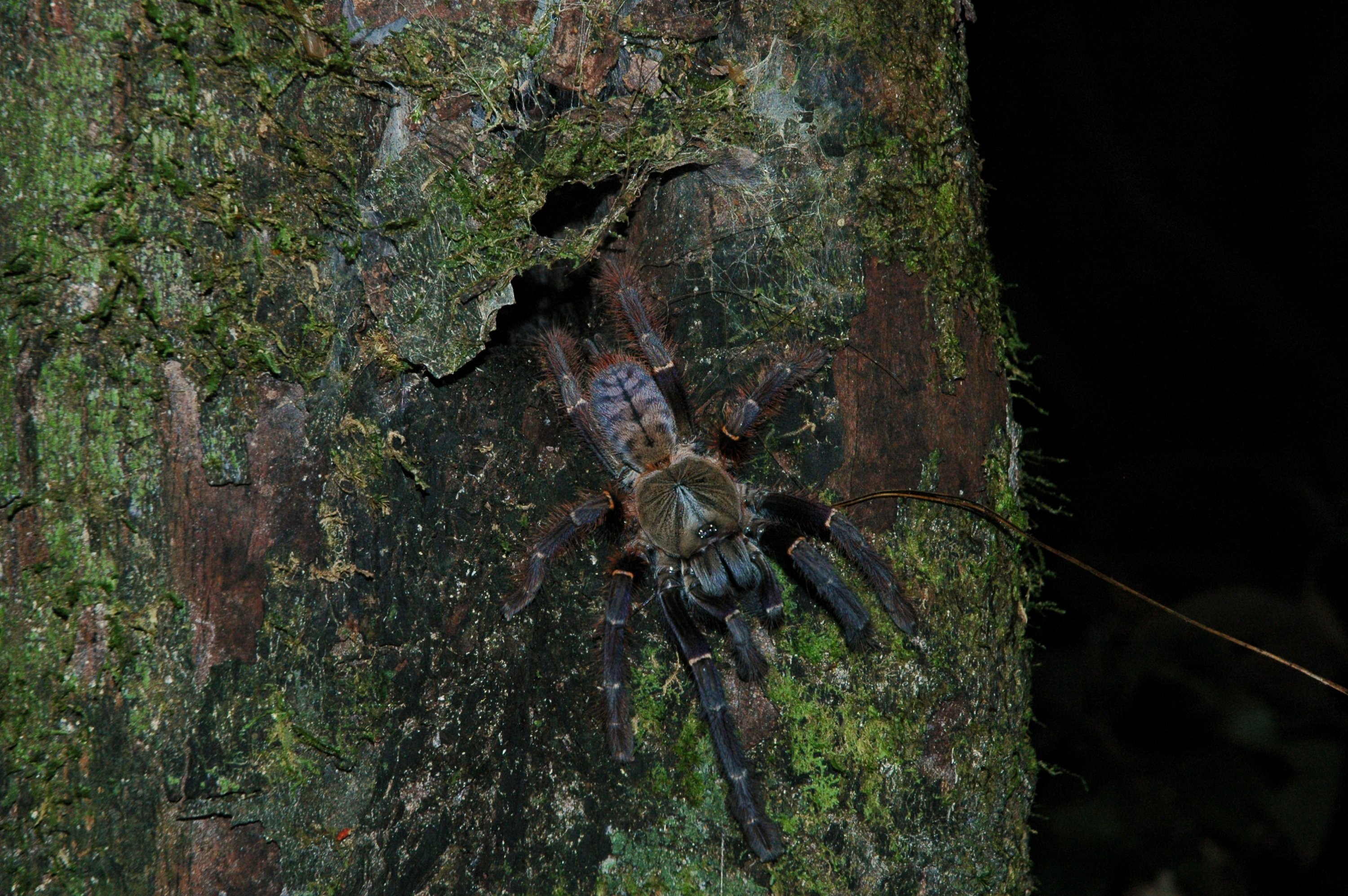 “What’s the matter?” she said with a puzzled look. “Anyone would think you had never seen a spider before.” She picked up her rucksack and set off along the trail disappearing into the distance. Soon, only the dim beam of her torch scanned the trees. Regaining my composure and a little of my pride, I wiped my brow with my bandana and followed her.

In the distance the sound of thunder could be heard and our guide suggested we should begin to head for home. It would be unwise to be caught out in the approaching downpour. Although it was hot and the thought of rain seemed to be last thing on our minds, we had learnt over the years that one should always heed the words of those that are more experienced. We were very close to a river that was prone to flooding. We could already hear the water rushing past us to our left. It was time to go!

The rain had just started as the lights of the lodge came into view. In a few short minutes, our clothes were soaked through and we were grateful that our guide had made his suggestion when he did. A tropical storm is a sight to behold. The deafening rain hitting the canopy, the lightning illuminating the night sky followed by the rolling thunder reverberating around the forest were quite exhilarating. As the rain abated we made our way to our cabin as tiredness overtook us.

We awoke to the sound of the Lar gibbons arriving at the river’s edge after a night of slumber deep in the forest and made our way along the wooden walkway to the guide’s area to inspect our findings from the previous night. Angela began unpacking a selection of plastic jars and containers and laid them out on the table. Beetles, centipedes, scorpions, and assorted bugs and spiders filled each jar. All individually held in solitary confinement. A young girl bought us refreshing drinks and cold hand towels. She smiled and placed them next to the plastic containers.

Angela continued opening jars and guides and other guests crowded around her all keen to see and hear her describe each occupant and in doing so learn a little more about these creatures. There was no doubt that we had amassed a fine collection but for us the tarantula was the real prize. It was amazing to think that only two years previously, the guides were adamant that there were no tarantulas in the area and now we had a small army of young adepts all keen to be the first to find a new species.

Most of them had little experience with invertebrates but were keen to learn and Angela was a most willing teacher. On one of our nightly excursions, one young guide continually brought the large huntsman spiders to us with the excitement of a child. “Labah-labah,” he would say through his toothless grin. It was difficult to explain that this was not a tarantula. Undeterred he smiled and disappeared back into the dark forest to reconvene his search.

I must explain that when we collect our critters, we have had permission from the lodge owners and that all of them – once catalogued, photographed, and recorded – are returned unharmed as close as possible to their original collection site. We are arachnolgists first and foremost and have no interest in collecting for any other reason than forwarding our knowledge of these beautiful creatures. Our aim is to find, photograph, and then – armed with our information – bring the plight of all rainforest inhabitants, whatever their size, back to the armchair travellers in the west. 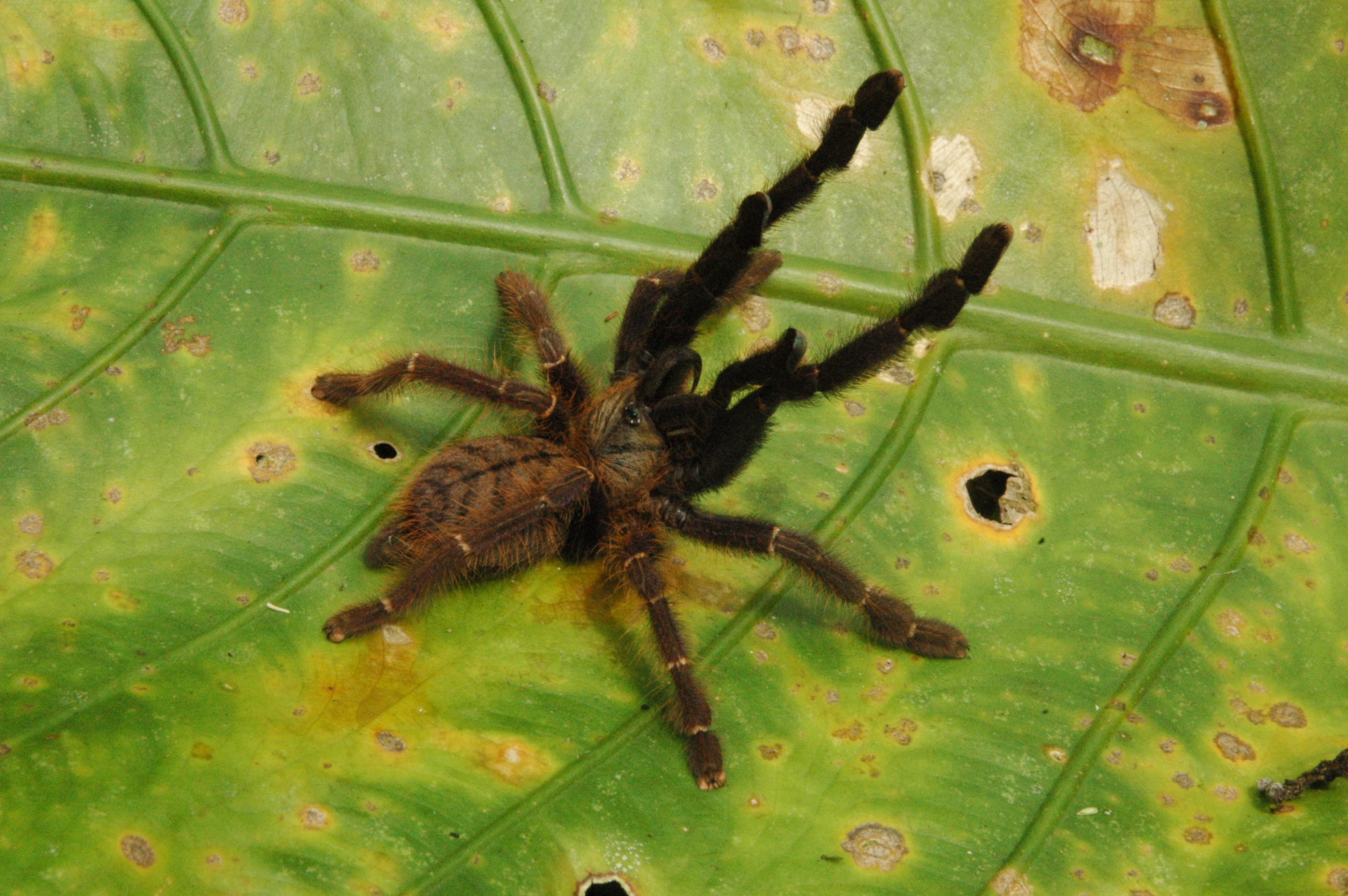 This female tarantula was a new species to be discovered in the area.

Having carefully captured our work on film, we sat and pondered over the tarantula. It was a female. It’s size and colouration confirmed this. It had a certain presence and it was certainly beautiful but was it new? We decided that it wasn’t but it was new to this area. That afternoon we returned to the forest with our guide and released it back to its treetop home.

Over the years, Angela has crawled through dark damp caves full of giant tarantulas and scurrying centipedes on a quest to find new species. Caves that I confess were daunting to me yet held no fear for her.

She has climbed trees to photograph the giant Nephila species that sit motionless in the huge webs suspended between the upper branches. I have seen her scramble down cliffs to peer into crevices high in a vertical wall in order to photograph a spider, wade through waist-height fast-flowing water, and trek for hours through thick forest to access an unexplored cave all in the hope that she will find something new to science. 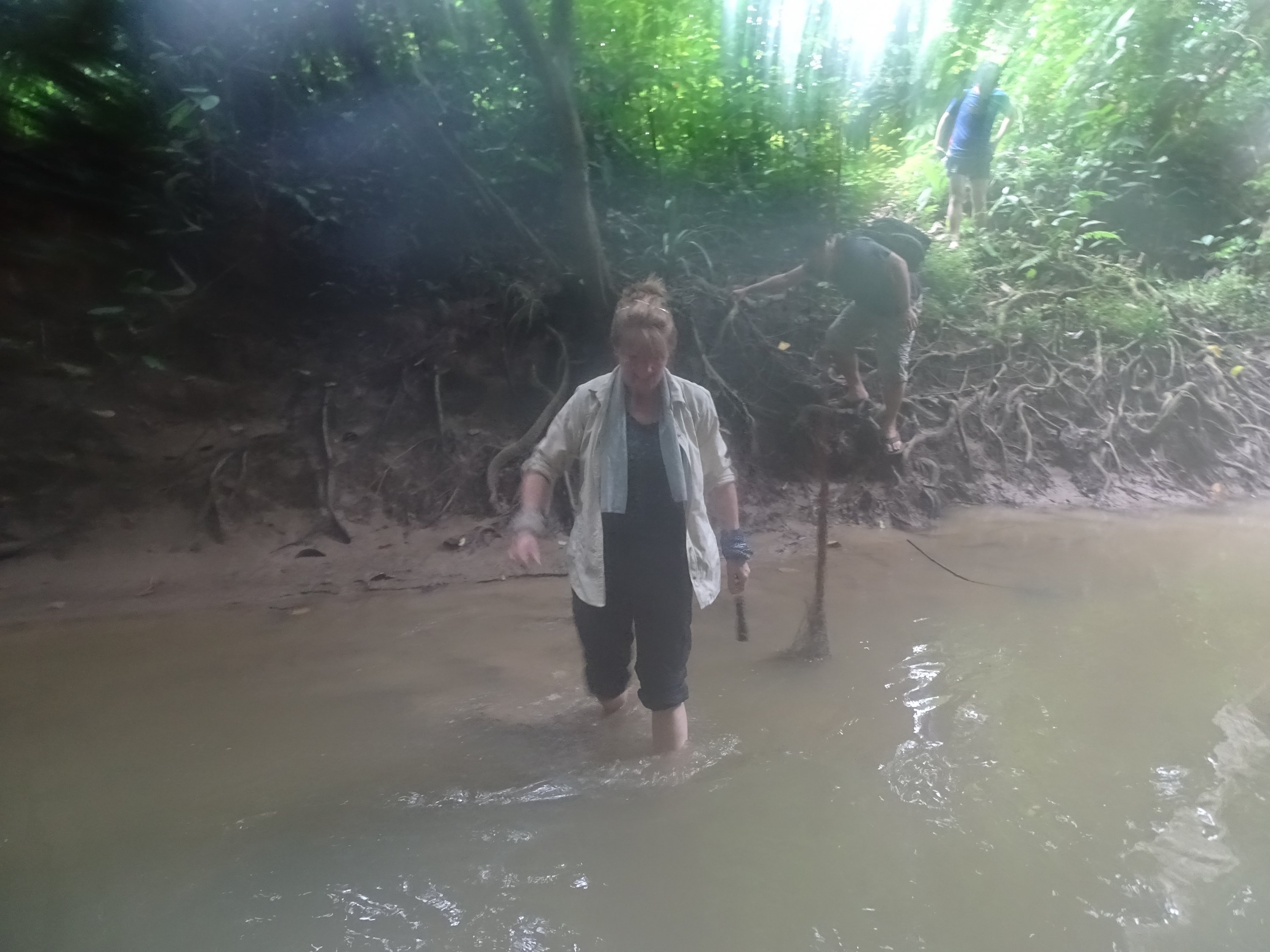 Angela wades across a river.

We have travelled the length and breadth of Borneo and Indonesia in search of arachnids and even followed in the footsteps of the great 19th century naturalist Alfred Russel Wallace in a vain attempt to find a spider that he described. Our proudest moment, whilst on any expedition in Southeast Asia, was when one dark evening we came across a hole in a tree trunk that was surrounded with silk. After some delicate expert teasing or ‘tickling out’ by Angela, a bright blue tarantula popped out. After managing to photograph this wondrous creature, it disappeared back deep into its nest refusing to be drawn further. This was the fabled ‘Earth Tiger’ and had never been seen in the area before our discovery. Such rarities are the reason we do what we do. It may not be to everyone’s taste, but the fact that we have found something new to an area will hopefully encourage the local government to protect the area from deforestation.

People are often shocked when I introduce Angela and repeatedly ask the question, “Do you go with him on his adventures?” She just smiles as she explains, that of the two of us, it is she that has the arachnid passion. Why does the idea of a woman being a spider expert seem so unpalatable?

Back in the UK, Angela works at a zoo where she is considered to be their spider expert. On her first day, when a colleague discovered her passion, she was named ‘Tarangela’. A name that 20 years later she still does not object to and indeed one she relishes when being interviewed by the local press. She often appears on TV and radio expounding the virtues of spiders.

I have a message to all children with an interest in natural history, “Never allow your gender or others to dictate your future.” Angela is the real 21st century Spiderwoman and continues to fly the flag for these much-maligned creatures.