Sunday, May 9
You are at:Home»News»Residents in areas under lockdown, EMCO urged to follow instructions, stay put in their houses 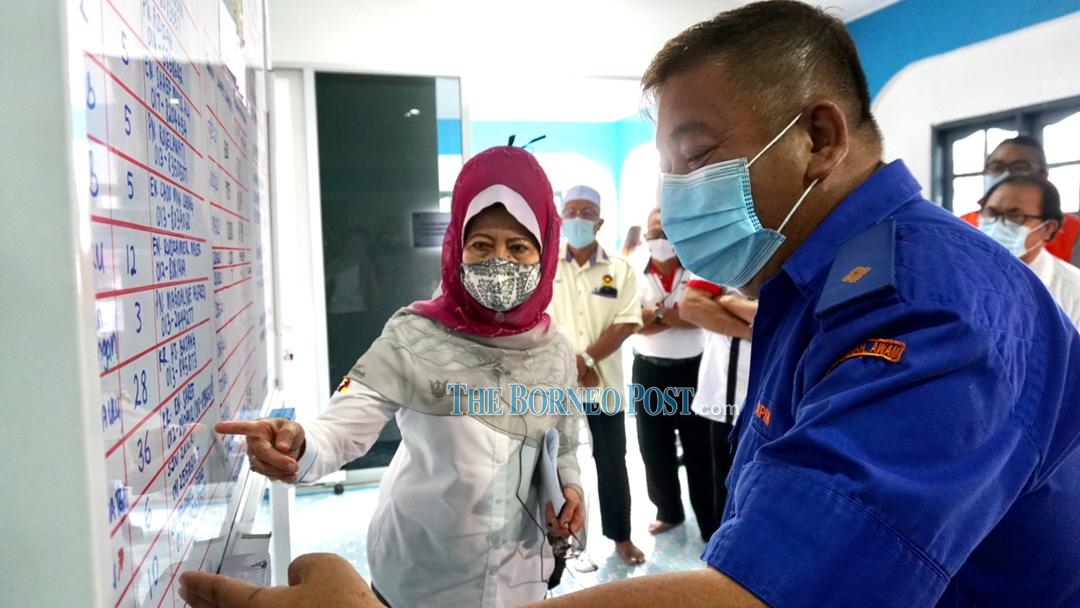 Fatimah being briefed at the Kampung Bintawa Ops Room during her visit today.

KUCHING (March 22): Residents in areas under lockdown or Enhanced Movement Control Order (EMCO) are urged to follow instructions from the authorities and stay put in their houses.

Welfare, Community Wellbeing, Women, Family and Childhood Development Minister Dato Sri Fatimah Abdullah said this is for their own good and those they might have come into contact with.

“We appeal to the residents under lockdown to follow instructions and understand why it is necessary. This is how we control the Covid-19 pandemic. If not, it will be very hard to control the spread of the virus.

“We know it impacts their daily lives and restricts their freedom. They can’t go to the market, they can’t go to work. But in this situation, we need to make sacrifices for the good of our own selves, our family and the community,” she said, following a visit to monitor the situation at the Ops Room for the EMCO at Kampung Bintawa Ulu and Kampung Bintawa Tengah today.

She was responding to reports that there have been residents who tried to sneak out using ‘jalan tikus’ (illegal paths). Fatimah said when this happens, the ‘jalan tikus’ will also be blocked.

“From previous experiences, there had been attempts to sneak out by the river too. That is why for Bintawa Ulu and Bintawa Tengah, we also have river patrol,” she added.

On reports of violence against healthcare workers such as throwing rocks at them, Fatimah said that it could have been a result of stress and frustration in the current situation.

“We hope that it will not repeated, because the workers are only doing their job.

“Taking swab tests may cause pain or discomfort, but it needs to be done so we hope that the residents understand this and give their full cooperation to the healthcare workers,” she said.

She added that following some incidents of violence against healthcare workers, they are now escorted by the police when they conduct swab tests at houses.

Meanwhile, Fatimah is pleased to note that the food supply for the area is sufficient and managed smoothly since the EMCO was implemented on March 16.

“The food supply has been given for the first week, and today the second ration will be distributed accordingly. We give the supply based on per head in the family so that it will be fair,” she said.

The distribution this week involved a total of 4,064 packs of food, conducted by the Social Welfare Department.

The EMCO in Bintawa Ulu and Bintawa Tengah started on March 16 in view of the increasing number of Covid-19 cases there. It is expected to end on March 29, subject to report and recommendations from Ministry of Health. Total number of residents affected are 4,064.

To-date, there have been 50 positive cases identified in the Bintawa Ulu sub-cluster, which is an extension from the Emperoh Jambu Cluster. The second swab test to be conducted on the residents is scheduled for March 25.