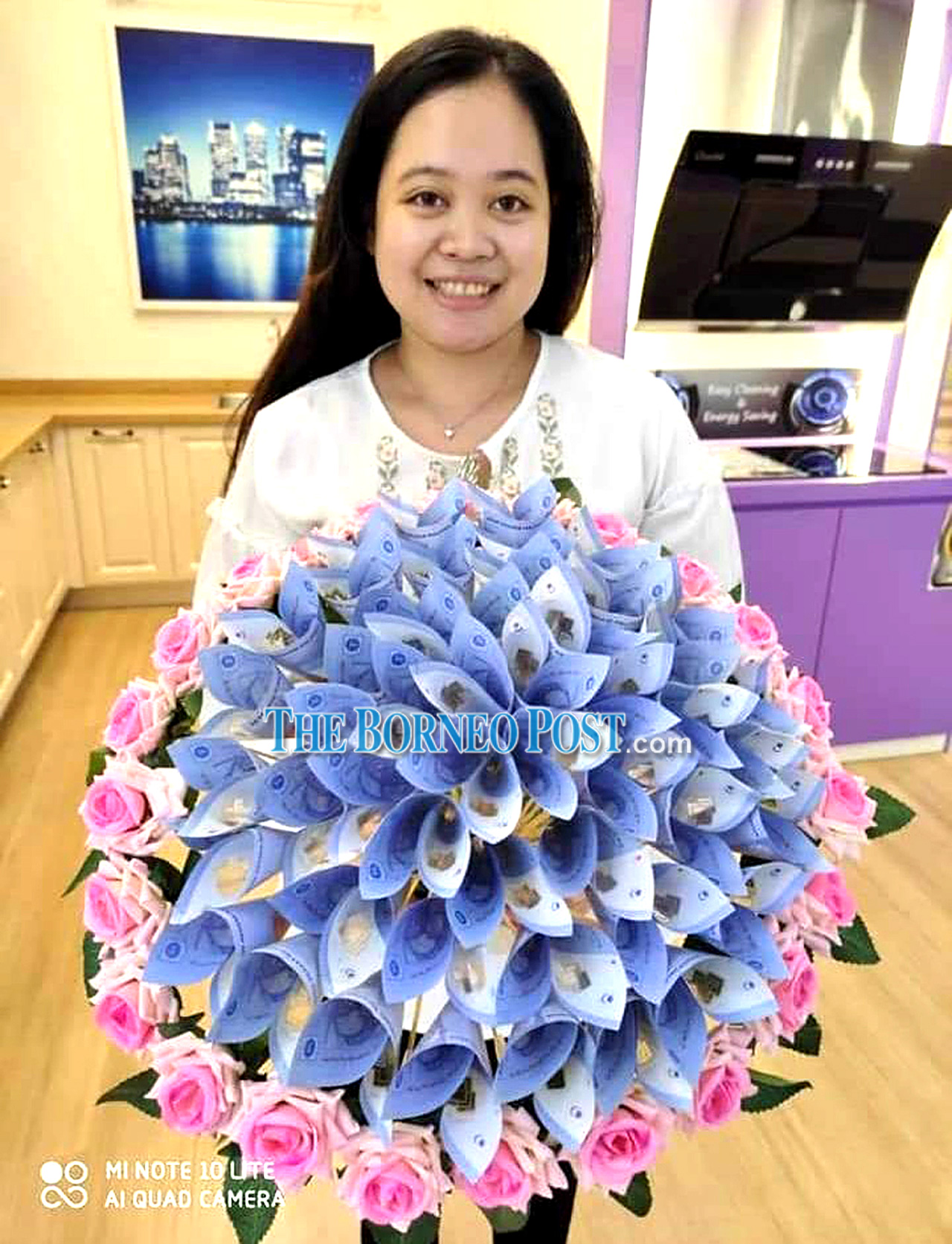 Ling shows a specially-ordered bouquet that incorporates flowers made from RM1 notes. According to her, it takes two days to complete this arrangement.

BEING a florist, whether full-time or part-time, is a very rewarding undertaking in that it opens up a lot of business opportunities for those eyeing to earn extra incomes, even during this period of Covid-19 pandemic.

For Magdeline Jane Ling, the customers’ response to her business has been good so far, despite it not being her full-time commitment.

The full-time junior interior designer is the owner of Darling Florist, based in Bintulu.

“This business is my part-time job – I’d do the orders whenever I’m available.

“I established this business back in August 2020.

“Initially, the plan was to open shop in March 2020, but Covid-19 came and the MCO (Movement Control Order) was enforced, so I had to postpone the plan,” she told thesundaypost.

Still, Ling said business had been good so far, even under the current Conditional MCO in Sarawak.

“It doesn’t really affect my business, as there’s at least one customer making orders every two days.

“I don’t have a shop yet, so I arrange my bouquets at home – or sometimes, in my office,” she said. 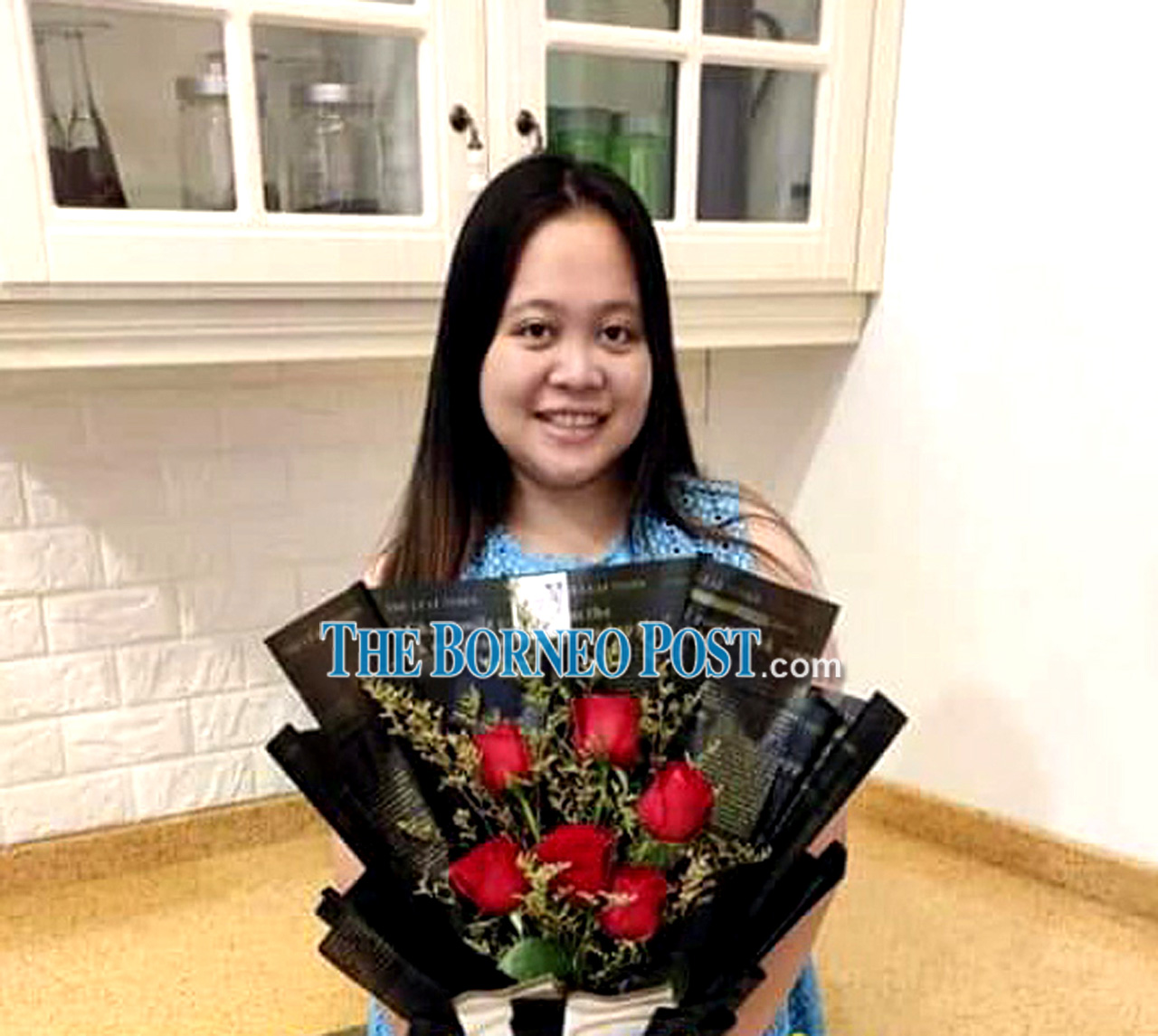 Ling with a bouquet of fresh red roses.

Ling said if she had opened her shop as planned in early March last year, she might not have been able to do any delivery due to the strict requirements under the MCO.

“It was an obstacle. That’s why I postponed it until the Covid-19 situation was under better control in Sarawak.”

However, once she opened up the business in August last year, she produced and sold 35 orders – with the price range between RM15 and RM400 per item – within that month alone.

“The collection in August 2020 was roughly RM1,500. At the end of December, I received a few invitations from my relatives to become their wedding planner, and the prices offered were quite good.

“But due to the Covid-19 pandemic, all receptions were postponed.

“The lowest income that I received was in October 2020 and January 2021, due to my tight schedule as an interior designer,” she added.

In terms of bouquet designs, Ling would always come up with new ideas for her customers.

“I would only use the same design upon certain requests, which is rare because many of my customers would want me to come up with fresh designs.

“It’s a challenge that I live for, in that I’m particularly picky about the designs myself.”

According to Ling, pricing would depend on wrapping style or design – with the starting price for a very simple bouquet at RM25.

However, she said it was never an easy task for her to come up with a design unique for each order.

She admitted that at times, it would take her a few days of trials and errors until she was fully satisfied with the final result.

On marketing, Ling said the strategy would always revolve around reasonable pricing, but she would also put focus on the distinctive designs to attract more customers.

“I’m so thankful that all of my customers have good attitudes, and some of them eventually become my friends. “ 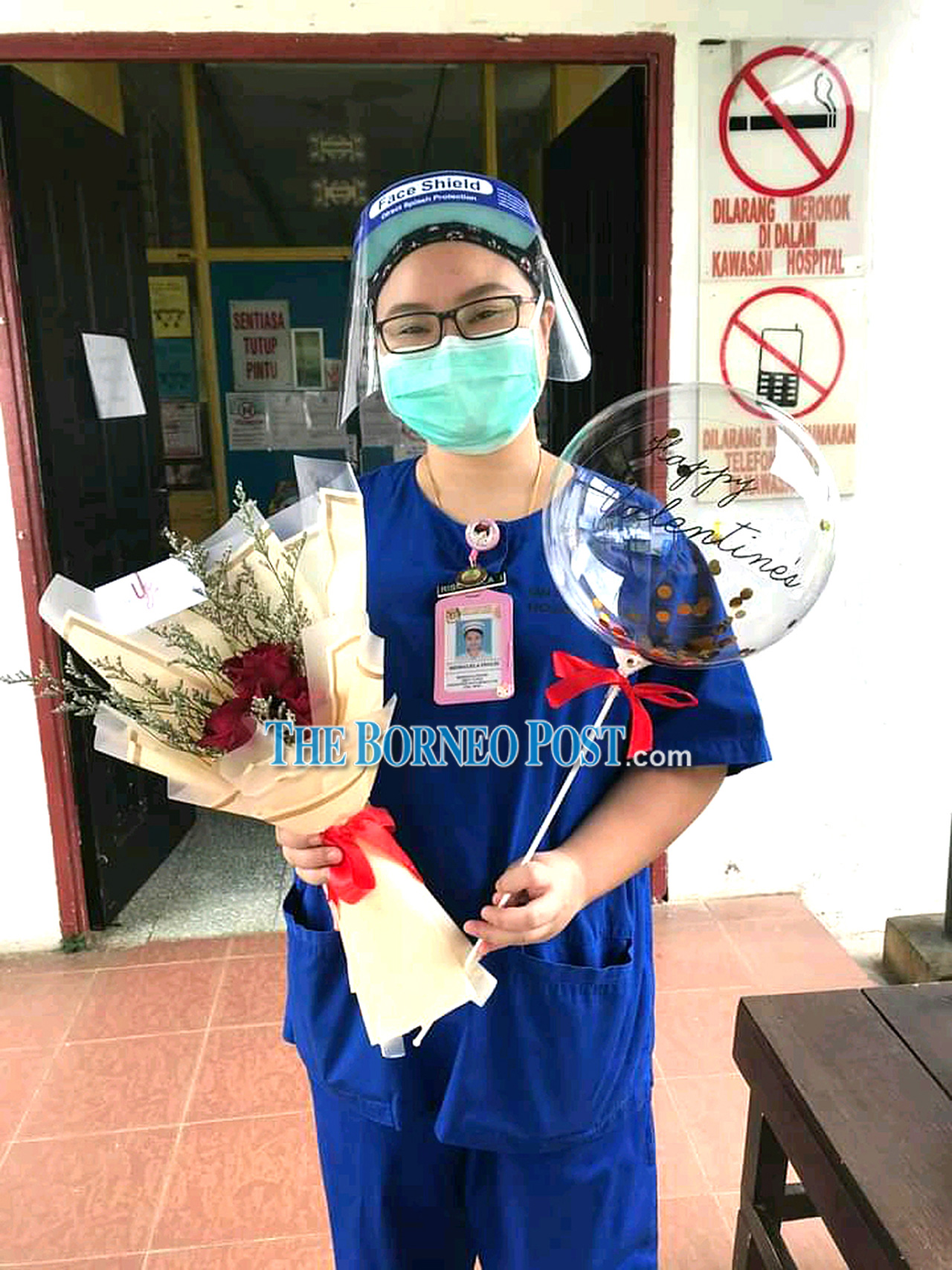 This nurse from Kanowit Hospital is all smiles after receiving this surprise JC Florist and Gifts bouquet from her husband.

Back on designs, Ling said many inspirations had come from watching YouTube and from there, she would weave in her own ideas.

“I was not a creative person to start with and at times, I wouldn’t even know how to come up with a wrapping style that’s different from the last order.

“Sometimes, the designs would just pop into my head; that’s when I would really push it to materialise those exact designs into my orders.

“It’s hard but so far, I’m quite happy with how things turn out. I’m happy to be able to make my customers smile.”

Ling also believed in being honest.

“To survive in any business that offers services, one must truly be honest.

“Sometimes when some items are not available, you need to tell the customers exactly that, and also to tell them that you’d suggest replacing the unavailable items with other things.

“Prepare the options for them to choose – it’s not easy, but I’m sure they would appreciate the considerate gesture.

“The customers also have the right to know if the bouquets are ready for pick-up, or if the florists are on their way to deliver the orders.”

Ling also stressed about the importance of being humble and keeping updated ‘with pretty much everything’.

“Thank the customers for choosing you. It’s important to always make them feel comfortable and surely, they would repeat their orders upon knowing that they’re appreciated,” she added. 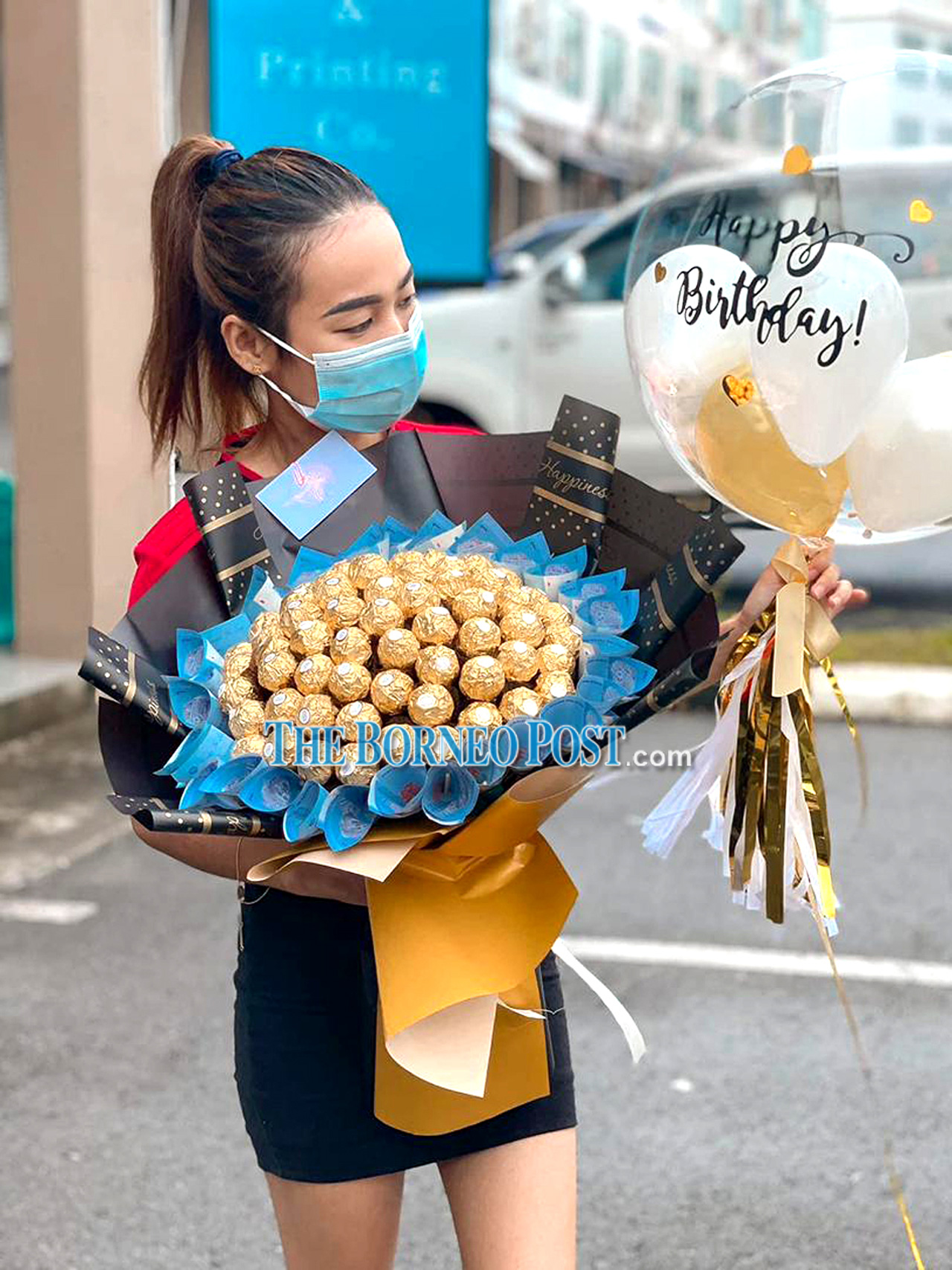 Janet on her way to deliver an order to a customer in Sibu.

Benefitting from word of mouth

Another florist, Janet Clement, was delighted that the response from her customers had been ‘outstanding’.

Operating JC Florist & Gifts from her home at Machan in Kanowit, she said many of her customers shared their experiences on social media, which benefitted her as she actually received free advertisement. 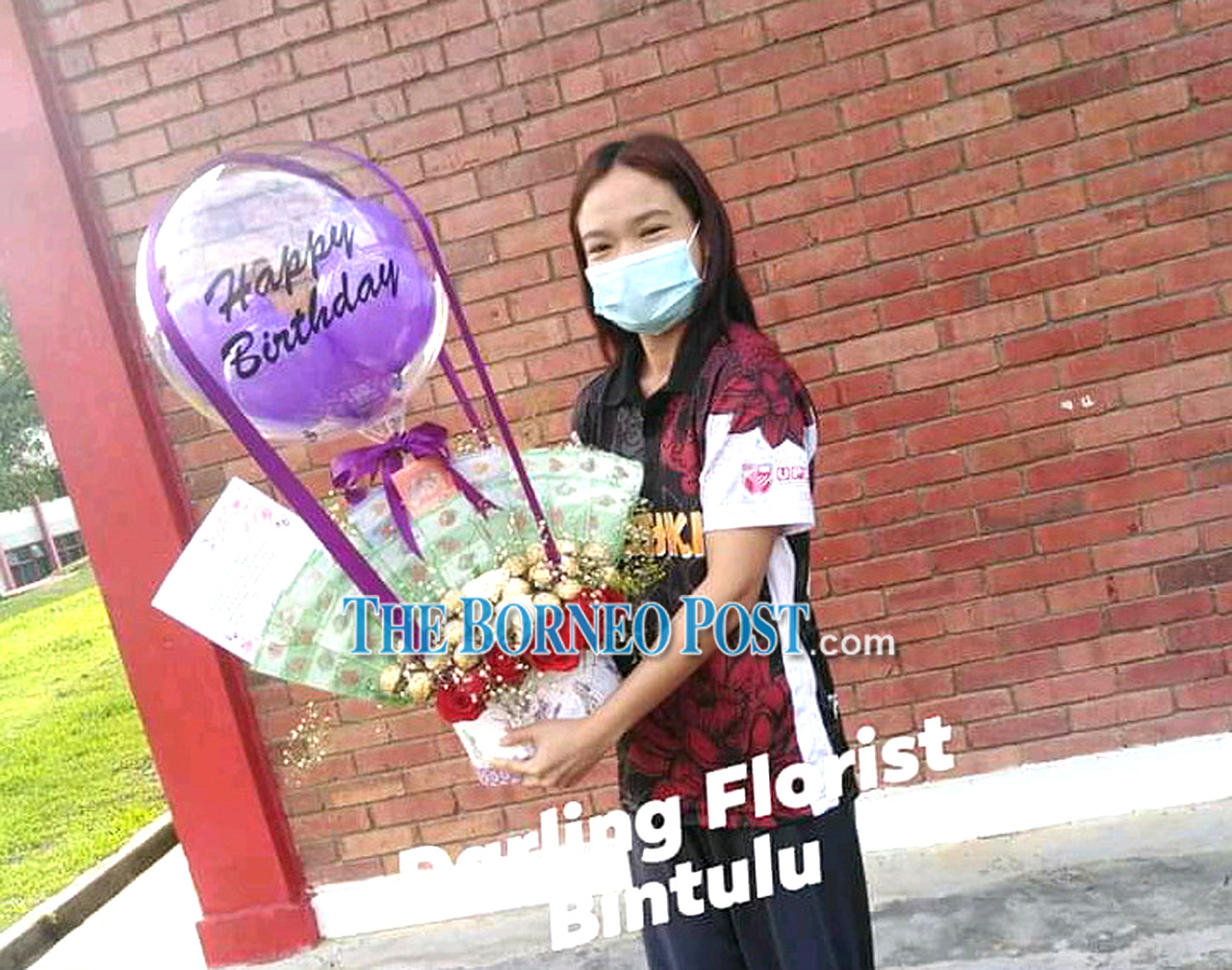 On CMCO, Janet said the restrictions had adversely affected her a little bit, in that it limited movements – a big challenge in terms of delivering the orders.

“I admit it’s a challenge, but we must see it as the new norms of doing business nowadays, with the Covid-19 threat still around.

“For me, there seems to be very little difference between now and the day I started this operation last year, around the same time when the pandemic was declared,” she said.

Just like Ling, Janet also emphasised on designs, adding that every florist has his or her own identity.

Nevertheless, Janet would also agree to incorporate her customers’ designs into their orders of bouquets and gifts.

“I have a set of prices slated for my own designs, and another for the customers’ designs – I would charge according to these lists and also the items used,” she added.

On the pandemic, she said although it was ‘never easy’ to be working under such a challenging environment, technology had helped in lifting some of the burden.

In her case, she had been fully utilising all social media platforms such as Facebook, Instagram and WhatsApp for her business.

“I get feedback from my customers via social media and from there, some customers have recommended my service to their friends.” 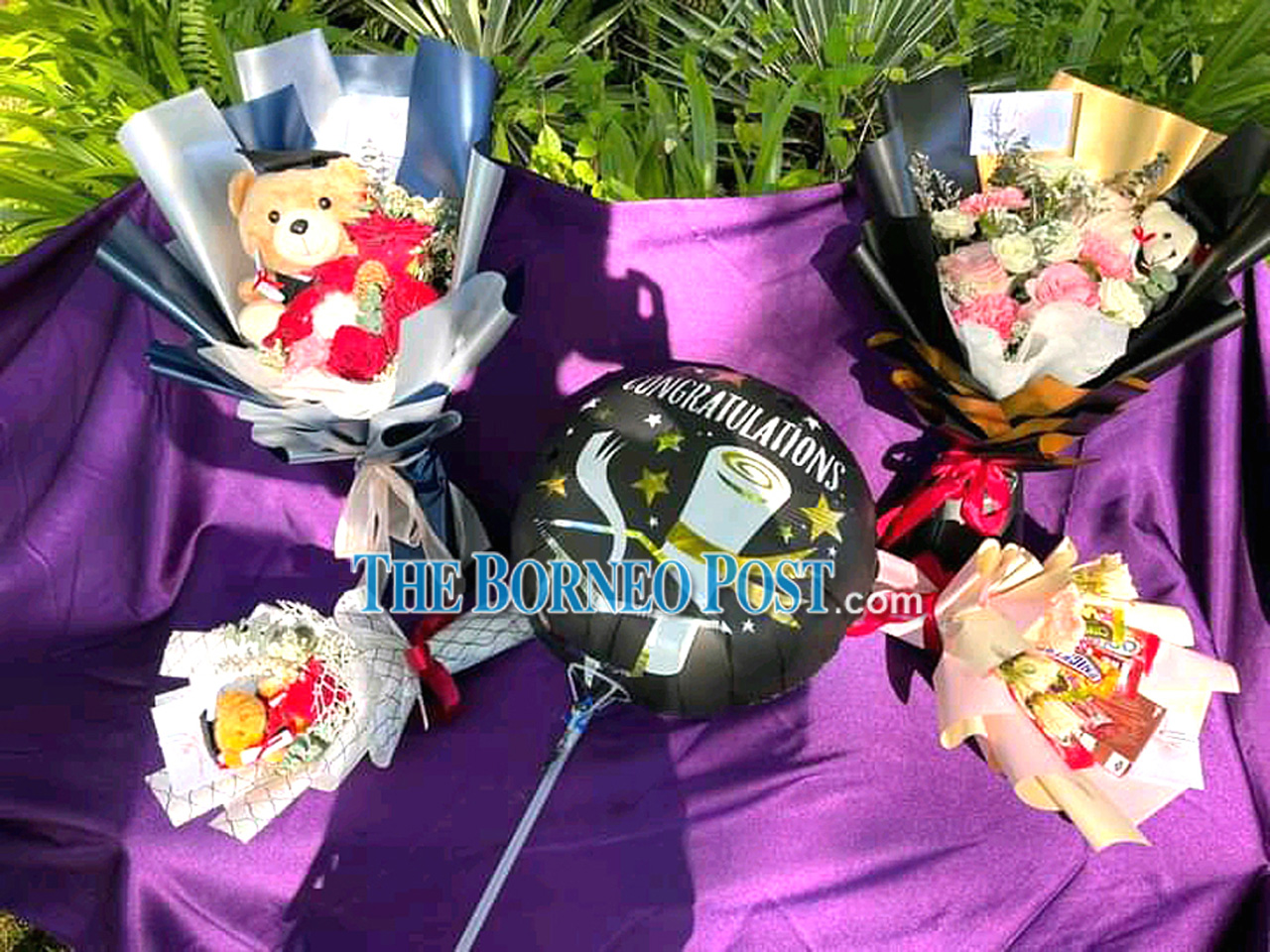 These four designs by JC Florist & Gifts are perfect gifts for graduates.

For the time being, JC Florist & Gifts delivery coverage is limited only to areas around Sibu and in this respect, she would do the delivery on her own. “It’s much safer and faster that way.”

Janet said she had never expected to become a full-time florist.

She set up this enterprise initially as a part-time operation during the MCO last year, as a way to earn some side incomes.

“Surprisingly, my service has been well-received by many. Now with technology, anyone can start their own online business, which is easy, cheap and quite convenient.

“We get to promote our offering through social media, instead of the ‘old-school’ usage of banners or printed advertisements.

“This is when we need our family and friends to help promote our business so that more people would know about it,” she said.