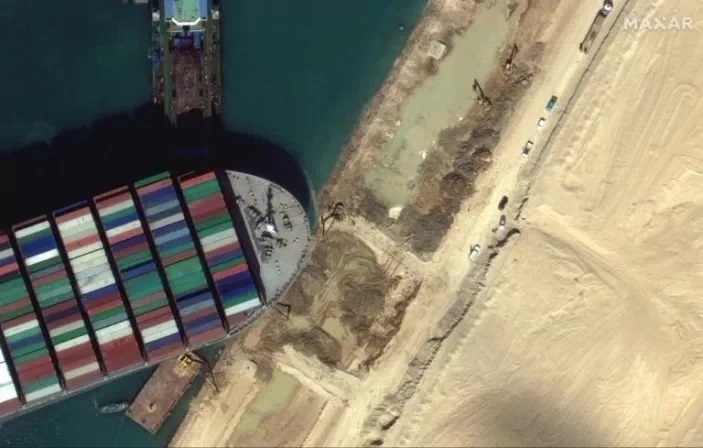 Egyptian authorities decided Sunday that more tugboats will be needed to free a mammoth container ship blocking the Suez Canal, a shipping agency said, dashing earlier hopes that the vital global trade route could be clear by the end of the weekend.

The MV Ever Given, longer than four football fields, has been wedged diagonally across the canal since Tuesday, towering over nearby palm trees and strangling world supply chains.

Hopes had risen earlier that salvage efforts could dislodge the vessel during Sunday’s high tide and end the maritime traffic jam, which is costing the global economy billions.

However Leth agencies, which provides crossing services to clients using the canal, said on Twitter late Sunday that the Suez Canal Authority (SCA) had postponed the attempt.

“SCA has decided to postpone the next refloating attempt until sufficient tug power is in place,” it said, adding “a likely time for the next attempt is Monday evening”.

The SCA did not confirm the news, saying in a statement earlier in the day that “operations have been stepped up around the bow of the ship”.

Richard Meade, an editor at shipping data and news company Lloyd’s List, said sources close to the salvage operation had voiced optimism “that the vessel could be moved within the next 24-48 hours”.

The crisis has forced companies to choose between waiting or rerouting vessels around Africa, which adds a huge fuel bill, 9,000 kilometres (5,500 miles) and over a week of travel to the trip between Asia and Europe.

Each day of the blockade could be costing global trade some $6-10 billion, according to a study published Friday by German insurer Allianz.

That translates to some 0.2 to 0.4 percentage points of annual trade growth each week.

And with over 300 ships and billions of dollars-worth of cargo now stalled at the entrances to the Suez Canal, many operators have already rerouted vessels around the Cape of Good Hope.

There has been a “surge” in the number of vessels opting for the African route, Lloyd’s List said Sunday.

“Most major container lines are now diverting ships round Cape of Good Hope and warning of supply chain disruption ahead. Some are starting to reject bookings,” it said on Twitter.

Cargo giant Maersk said that by the end of the weekend, a total of 32 Maersk and partner vessels would be directly affected by the blockage, with 15 redirected.

French shipping giant CMA-CGM said Sunday two of its Asia-bound vessels would be re-routed, while it was considering air or rail transport for some clients.

Suez Canal Authority (SCA) chief Osama Rabie told an Egyptian news channel the ship had moved from side to side for the first time late Saturday.

“It is a good sign,” he said, adding that 14 tugboats were deployed around the stricken vessel and salvage crews were working round the clock.

Salvage teams are pressing efforts to remove sand around the ship, with 27,000 cubic metres (over 950,000 cubic feet) cleared so far at a depth of 18 metres, SCA spokesman George Safwat said Sunday.

But Ihab Talaat el-Bannane, a former Egyptian admiral, cautioned that the accident had taken place in a part of the canal where the ground was rocky and difficult to dig.

“At some point, the ground experts will have to stop digging to avoid earth collapsing onto the ship,” he said.

The area has been placed under tight security, with extra military and police personnel deployed.

The 200,000-tonne MV Ever Given veered off course in the Suez Canal on Tuesday, with officials blaming 40-knot gusts and a sandstorm.

But Rabie on Saturday said “technical or human errors” could have led to the grounding of the Taiwan-run, Panama-flagged container ship near the southern end of the 193-kilometre (120-mile) long canal.

Allianz warned the blockage was “the straw that breaks global trade’s back”.

“Suppliers’ delivery times have lengthened since the start of the year and are now longer in Europe than during the peak of the Covid-19 pandemic,” it said.

Some 369 ships are currently stalled as they wait for the canal to reopen, Rabie told the Al-Arabiya news channel Sunday.

Egypt is losing some $12-14 million in revenue from the canal for each day it is closed, Rabie added, while Lloyd’s List has said the blockage is holding up an estimated $9.6 billion-worth of cargo each day between Asia and Europe.

Russia offered assistance Sunday, following other countries including the United States that have made similar offers.

In a sign of the knock-on effects, authorities in war-wracked Syria said the crisis had hit its fuel imports from Iran and forced it to ration already scarce supplies.