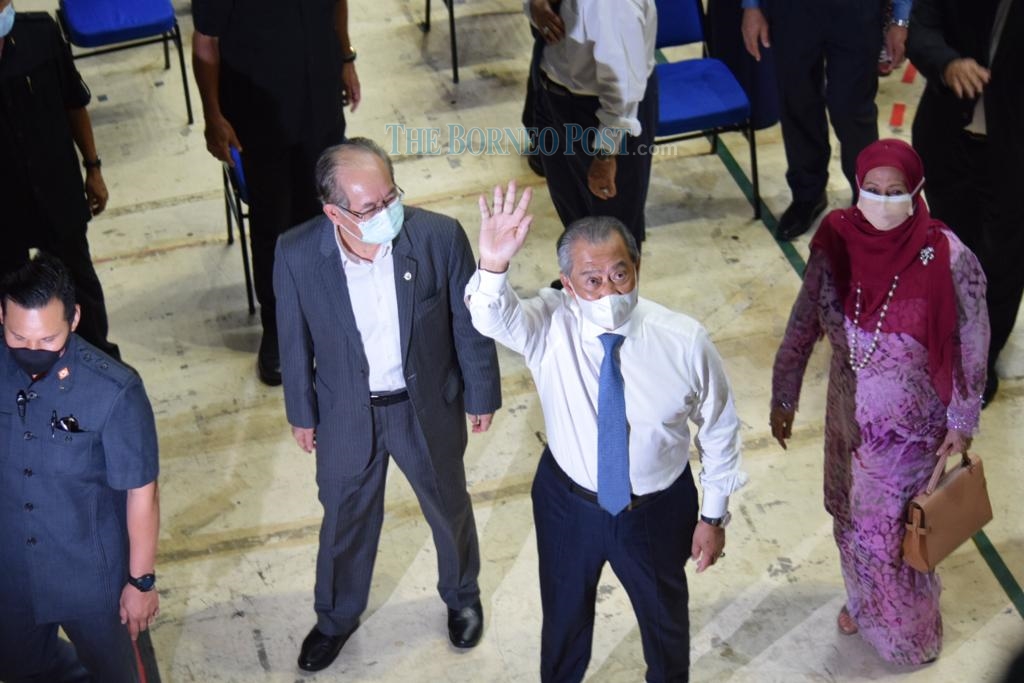 Muhyiddin waves to people in the stands at the Indoor Stadium in Petra Jaya after visiting the vaccination centre. At left is Uggah. – Photo by Roystein Emmor

The state aimed to give priority to residents in red zones for vaccination, he told reporters after accompanying Muhyiddin on a visit to the vaccination centre at the Indoor Stadium in Petra Jaya this afternoon.

“We have conveyed to him the number of vaccines needed especially in red zone districts, where there is a need to accelerate the vaccinations.

“In principle he has agreed but then again depending on the supply of vaccines that will arrive from abroad,” said Uggah, who is the state disaster management committee chairman.

The Heath Ministry categorises districts with no Covid-19 cases as green zones, those with one to 20 cases in a two-week period as yellow zones, 21 to 40 as orange zones and 41 and above as red zones.

According to SDMC’s Covid-19 update today, 12 out of 40 districts in Sarawak are red zones with a total of 2,560 cases over a two-week period.

On whether the state government would still buy its own Covid-19 vaccines if the federal government’s supply is insufficient, Uggah said the state was still pursuing the matter.

“…that also depends on whether there is supply. There is always an issue with supply. Our vaccine working group is working actively with Dr Sim to get in touch with their contacts on this,” he said, referring to Local Government and Housing Minister Datuk Dr Sim Kui Hian, who was also present during the prime minister’s visit.

Dr Sim had said recently that the state government was open to the possibility of purchasing its own vaccines, as it aimed at completing the Covid-19 vaccination programme for some 2.2 million people in Sarawak by August this year.

Meanwhile, Uggah said as of today, the number of Sarawakians who have registered to be vaccinated via MySejahtera App had reached 66.7 per cent target.

“Of the two million targeted population, 1.2 million Sarawakians have registered to be vaccinated. I would say that we are ready for the vaccination, effectively meaning that 99 per cent of those aged 18 and above need to be inoculated.

“Today we have shown to him (Prime Minister) that Sarawakians throughout the state are ready for the vaccination, and that’s why we appeal to him to make sure that we will be able to achieve that. The only limiting factor now is the supply of vaccines,” he said.

Some 1,014 frontliners from 48 agencies received their second dose of vaccine at the Indoor Stadium today.