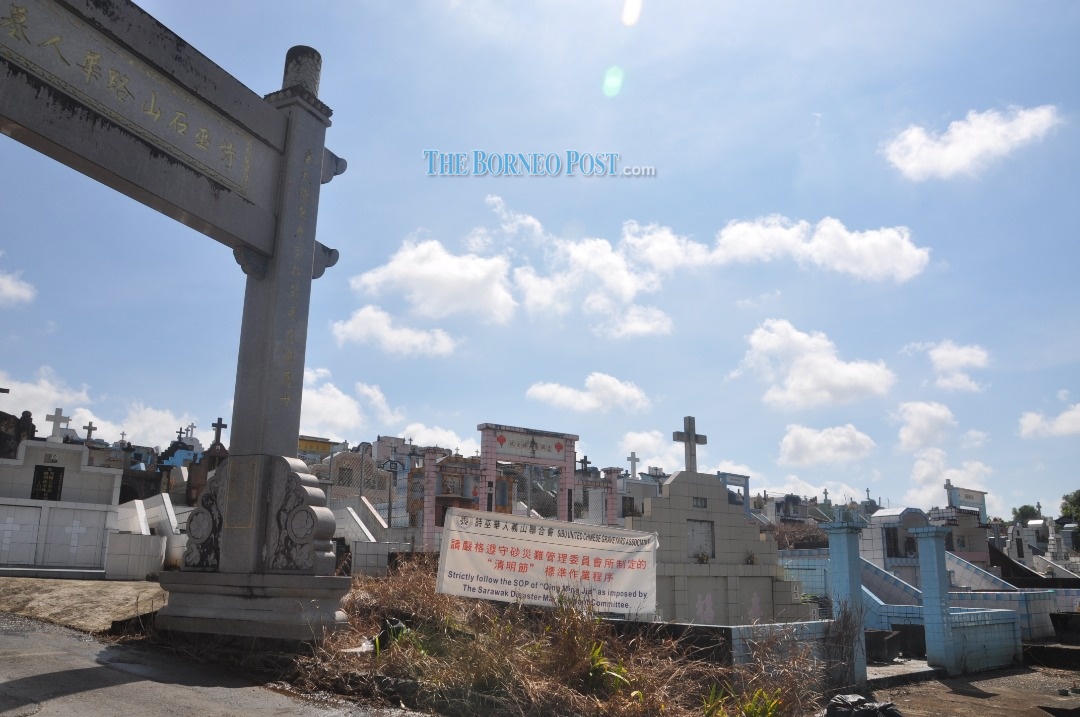 A banner put up at a cemetery in Sibu to remind those visiting the graves during Qing Ming to observe the SOP.

In pointing this out, he also extended his gratitude to the respective management of cemeteries for providing MySejahtera QR code for family members to register their ‘location check-ins’ and maintain a manual record of visitors.

“We are very thankful to these management for their cooperation and members of the public for complying with the SOP,” he said when asked on compliance with SOP during Qing Ming Festival.

Meanwhile, Sarawak Disaster Management Committee (SDMC) has allowed up to eight members of a family to go to graves and only two at columbariums or memorial halls for Qing Ming from March 20 to April 14.

The SOP drawn up by the state’s Unit for Other Religions (Unifor) and released March 17, said no inter-zone travel was permitted for those observing Qing Ming.

The visiting time at the cemeteries have been fixed at 4am to noon and at columbariums or memorial halls at 8am to 4pm, however Teo noted many had visited the graves in the wee hours in the morning to avoid crowds.

Dr Annuar, who is Assistant Minister of Local Government and Housing, had said strict compliance with the SOP such as making available MySejahtera QR code for family members to register their ‘location check-ins’ and maintain a manual record of visitors is necessary to facilitate contact tracing in the event if there is a positive Covid-19 case later on.

On another matter, Teo revealed that Sibu United Chinese Graveyard Association is building a new road, stretching about 2km leading to cemeteries in Teku area.

He said when completed, this would help ease traffic congestion on the main road during Qing Ming Festival.

He said works on sand filling and road foundation for phase one have reached about 90 per cent completion.

This will be followed by the stoning works later, he added.

Asked for the total cost of the project, he said the cost for phase two has yet to be worked out.

Nonetheless, according to Teo, Progressive Democratic Party (PDP) president Datuk Seri Tiong King Sing had requested RM2 million from Unit For Other Religions (Unifor) to carry out this two-phase project.