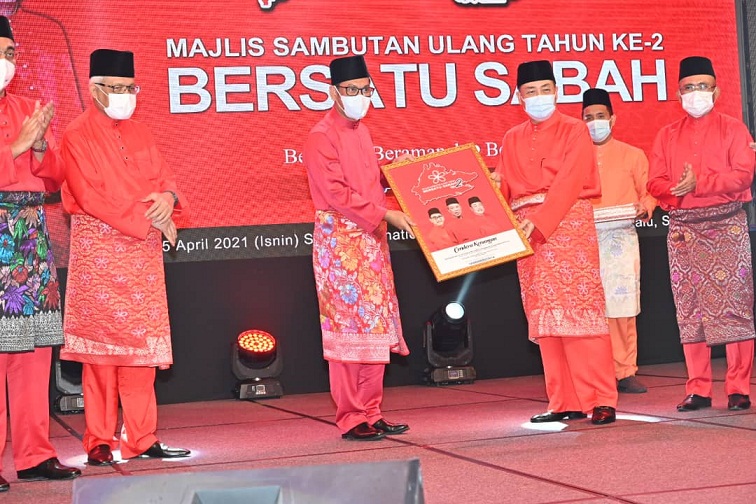 Hajiji (third from right) presents the memento to Ahmad Faizal.

KOTA KINABALU: Bersatu Sabah leaders are urged to strengthen the Gabungan Rakyat Sabah (GRS) consensus that is built by leaders at the State level to the grassroots.

Chief Minister Datuk Seri Panglima Hajiji Haji Noor, who is also Bersatu Sabah chief, said that the GRS consensus will be the catalyst for all parties within GRS to unite under one platform of cooperation for the people, and to build the nation.

He reminded that while they were in different political parties, but they were once under the same family.

Hajiji then expressed his gratitude to Umno Sabah chief Dato Sri Bung Moktar Radin for the latter’s commitment to ensure there will be no seats conflict between Umno and Bersatu Sabah.

“I hope that the GRS consensus will bring us to be together to ensure there is no conflict with regards to seats between all the GRS component members.

“Insya Allah, I am confident the spirit of the GRS consensus will drive us towards unity and the spirit of cooperation. Together, we have built our victory, today let us together fill and defend that victory. The strength of each of GRS component party members will strengthen the GRS consensus,” he said at the second anniversary celebration of Bersatu Sabah held at the Sabah International Convention Centre (SICC) held on Monday evening.

He reminded that the GRS consensus is not only important in Sabah but also meaningful in building the unity and strength to ensure the interest of Sabah continues to be defended in the Malaysia Federation.

“We will be respected if we are strong and united in bringing the voice and struggle of our State and the people,” he said.

He also said that they are more effective if they are part of the Federal government.

“We are grateful to have a Prime Minister who cares about Sabah. Since I began leading the State government, the Prime Minister has expressed the high commitment of the Federal Government to help Sabah. The commitment can be translated in various actions that have brought large benefits to us in Sabah,” he said.

He also announced that under the leadership of the present Prime Minister, Petronas has begun to pay the sales tax on petroleum products to Sabah.

“This will raise the State’s income for the benefit of the people,” he said.

Hajiji then called on Bersatu Sabah and all GRS component parties to continue giving their support to the Prime Minister and the Federal government.

“We in Sabah must act to ensure the Federal and Sabah governments continue to enjoy stability for the people and the nation.

He added that Sabah has become the foundation of success for Muhyiddin and is the word of mouth uttered by many people.

Ahmad Faizal who is also the former Perak Menteri Besar, also said that he will return to become the number one leader of Perak.

He resigned from the post on Dec 5, last year.

“Only one State is led by PPBM and that is Sabah, after the Menteri Besar of Perak resigned before this.