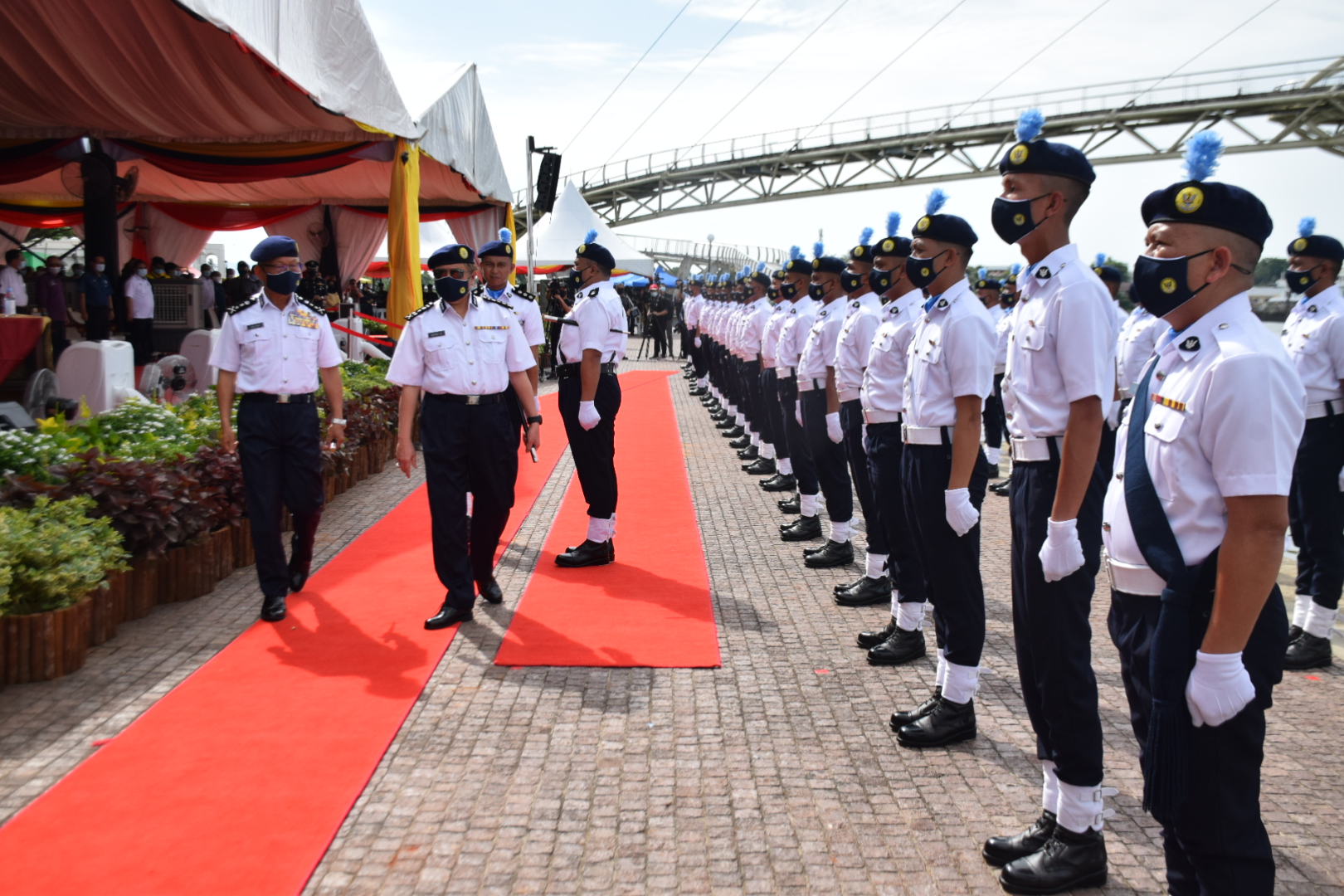 Abang Johari (second left) inspects the guard of honour prior to the official launch of Sarawak Coast Guard. – Photo by Roystein Emmor.

“Our marine parks cover more than 1.2 million hectares. We will build five bases for the Sarawak Coast Guard’s operations under the 12th Malaysia Plan.

“These will be in Kuching, Tanjung Manis, Bintulu, Miri and Lawas,” he told a press conference after launching Sarawak Coast Guard at Kuching Waterfront today.

He said among the marine mammals that have been sighted included a sperm whale (Physeter macrocephalus) and common minke whale (Balaenoptera acutorostrata) in the area of Luconia Shoal NP.

“We must defend the uniqueness in our waters,” he stressed.

Abang Johari added that Sarawak Coast Guard currently has 68 personnel who will work together to complement other agencies such as the Malaysian Maritime Enforcement Agency (MMEA) and Royal Malaysian Navy in defending the waters of the state. 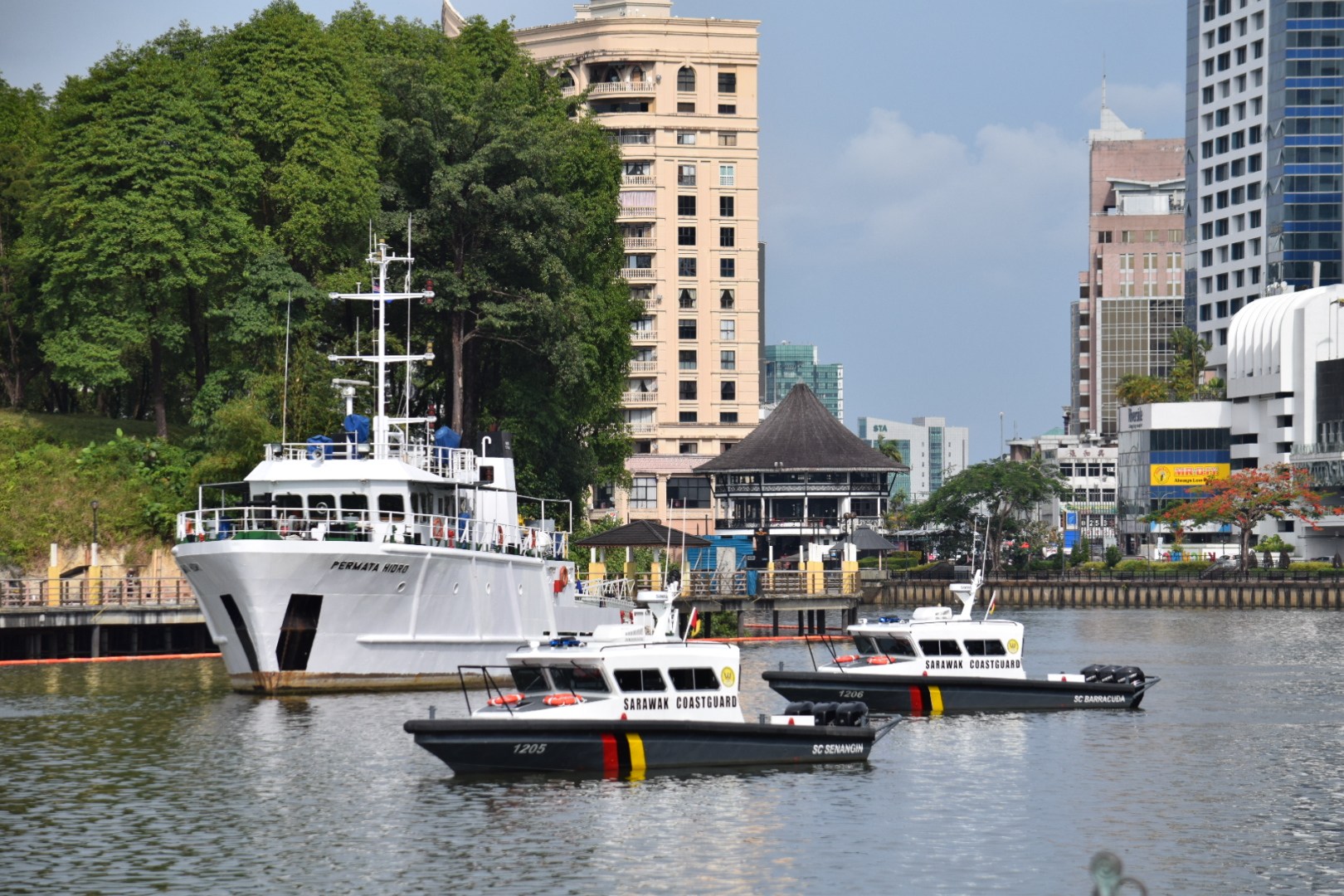 Some of SCG’s vessels during the launching today. – Photo by Roystein Emmor.

Earlier in his speech, the chief minister said Sarawak Coast Guard will enforce laws under the state’s ordinances that protect the region of Sarawak.

He pointed out that with the establishment of the state’s coast guard, it was evident that the Gabungan Parti Sarawak (GPS)-led government always puts the interests of the people first.

“The state government is always concerned about the wellbeing and safety of fishermen in the state. With the six interceptor boats to be operating in Sarawak waters this year, the safety of fishermen and the maritime resources along the coast of the state will be taken care of.

Abang Johari revealed that the state government has allocated RM90 million to purchase assets for the use of Sarawak Coast Guard, which was tabled in the 2020 Budget.

“The assets are also suitable to be used to assist the people during major floods and in search-and-rescue operations. Sarawak Coastguard also complements and cooperates with other enforcement agencies, whether state or federal,” he said.

He added that the setting-up of the coast guard is an initiative of the state government to create a secure climate to attract foreign investors in the development of Sarawak as it heads towards becoming a developed state by 2030.

The doctrine is based on data networking or intelligence through various sources as well as agency networking efforts, which will enable Sarawak Coast Guard to operate as an agile, lean and rapid response entity, he said.

Chai informed that the coast guard has received its first vessel – a catamaran named ‘SC Tanjung Datu’ – at the end of last year.

“This asset will be deployed for enforcement operations, disaster management of floods, as well as a training ship for Sarawak Coast Guard personnel,” he said.

He said in addition, the coast guard has also received six interceptor boats while a total of nine speed patrol ships are expected to be completed in stages in 2022 and 2023,” he said.