Thursday, January 20
You are at:Home»News»Sarawak»CM: Use of ‘wilayah’ term for Sarawak depends on MA63 negotiation outcome 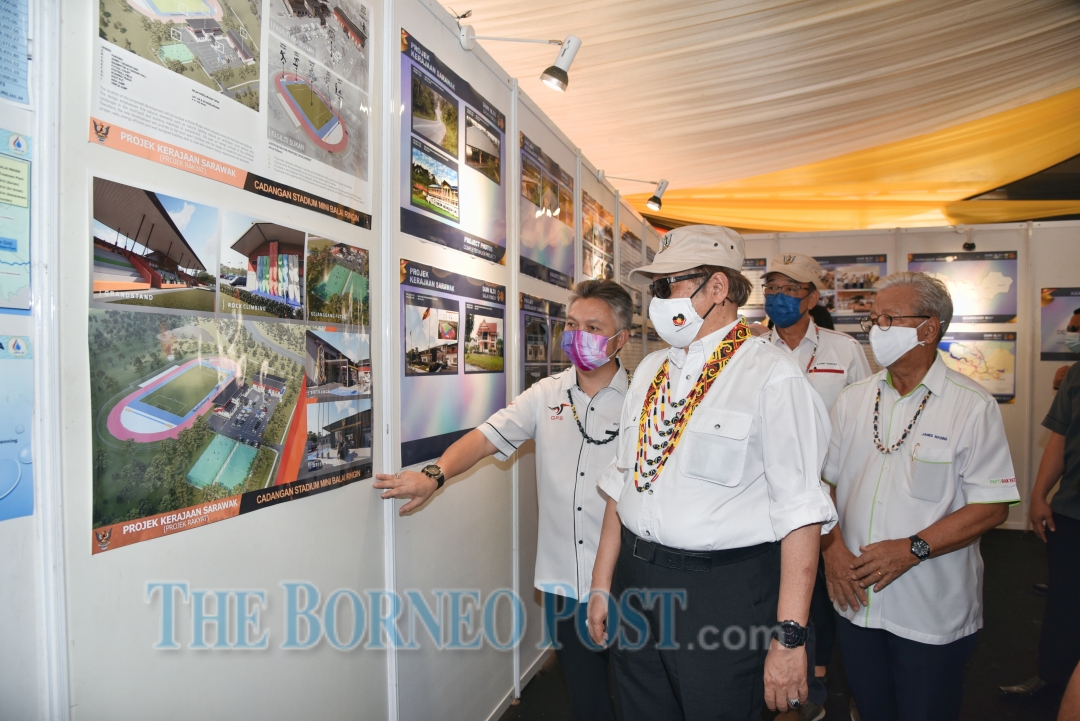 Abang Johari (centre) being briefed on the mini stadium by Snowdan, (left) while Masing (right) and Karim (background) look on. – Photo by Information Department

KUCHING (April 10): The use of the term ‘wilayah’ or region for Sarawak depends on the outcome of the current negotiation on Malaysia Agreement 1963 (MA63), said chief minister Datuk Patinggi Abang Johari Tun Openg.

“Let the legal experts determine the actual term. We are still in the midst of negotiating where MA63 is concerned,” he told reporters after officiating at the ground-breaking ceremony for Balai Ringin Mini Stadium Saturday.

Abang Johari said that the state is asking for the Federal Constitution to be amended to reflect MA63.

“We have raised about the provision in Article 160(2) of the Constitution from the point of interpretation of the Federation. In the current provision, it refers to Federation of Malaya only.

“In MA63, the formation of Malaysia was formed by Federation of Malaya, Sabah, Sarawak and Singapore. So we are asking for the Constitution to be amended, must follow MA63 besides the Federation Malaya Agreement. It has to be combined.

“Only then it can change the Article 1(2) in Constitution to state that ‘Malaysia consists of Federation of Malaya, Sabah and Sarawak’,” he said.

Abang Johari pointed out that was why prime minister Tan Sri Muhyiddin Yassin during his recent working trip had said that Sarawak is not like other states.

“He stated that it is a region. That is all. But whether we are going to use that or not is depending on the outcome of the current negotiation on MA63.

“It is a suggestion from prime minister. If people want to say you are a region, you just accept it, but the actual term leave it to the experts,” he said.

On Balai Ringin development, Abang Johari said the masterplan has to be holistic, with priority to be focused on water supply.

“Balai Ringin is very strategically located along the Pan Borneo Highway. The important thing is water supply. It is currently only 30 per cent covered.

“However, 100 per cent water supply is expected to be completed by 2024, so only then the plan for a mini township can be realised,” he said.

He said the masterplan will be studied and looked into by the Land and Survey Department.

Earlier, Snowdan explained that construction of the RM10 million mini stadium had started earlier this year and will take about 18 months to complete.

The Youth and Sports Assistant Minister said the mini stadium will consist of many components such as futsal field, rock climbing, race track, badminton court and others.

“The mini stadium is centrally located in the ‘Golden Triangle’ of Serian, Simunjan and Sri Aman where there are around 50 schools.

“When we have this mini stadium we can discover new talents. For everyone’s information, there are 15 Sukma athletes who come from this area, in fields like football, hockey, rugby, tennis, sepak takraw, and track and field. International heavyweight bodybuilder Buda Anchah also comes from here,” he said.

Snowdan however noted that there is need to fix some unforeseen circumstances, such as swampy ground around the mini stadium and others, to ensure that the mini stadium will have the complete facilities, and requested for an additional fund of RM5 million.

Previous ArticleOperators, customers, visitors reminded to observe the SOP as all marketplaces in Kapit reopens
Next Article Willie: Emergency not a ‘weapon’ for PN to remain in power