Friday, June 25
You are at:Home»Business»BizHive»Why Indonesia is still one of our favourite markets

IN the previous update at the start of 2021, we rated Indonesian equities 3.5 stars ‘attractive’ and handpicked it as one of the top five markets for 2021 (alongside China, Korea, Taiwan and Brazil).

Since then, the benchmark Jakarta Composite Index (JCI Index) rallied close to eight per cent before the recent retracement which we believe opened up another opportunity to reenter into this market.

In this article, we would like to reiterate our call for Indonesia as we think there is more upside to go for this market, and that investors should seriously consider adding some positions in it. 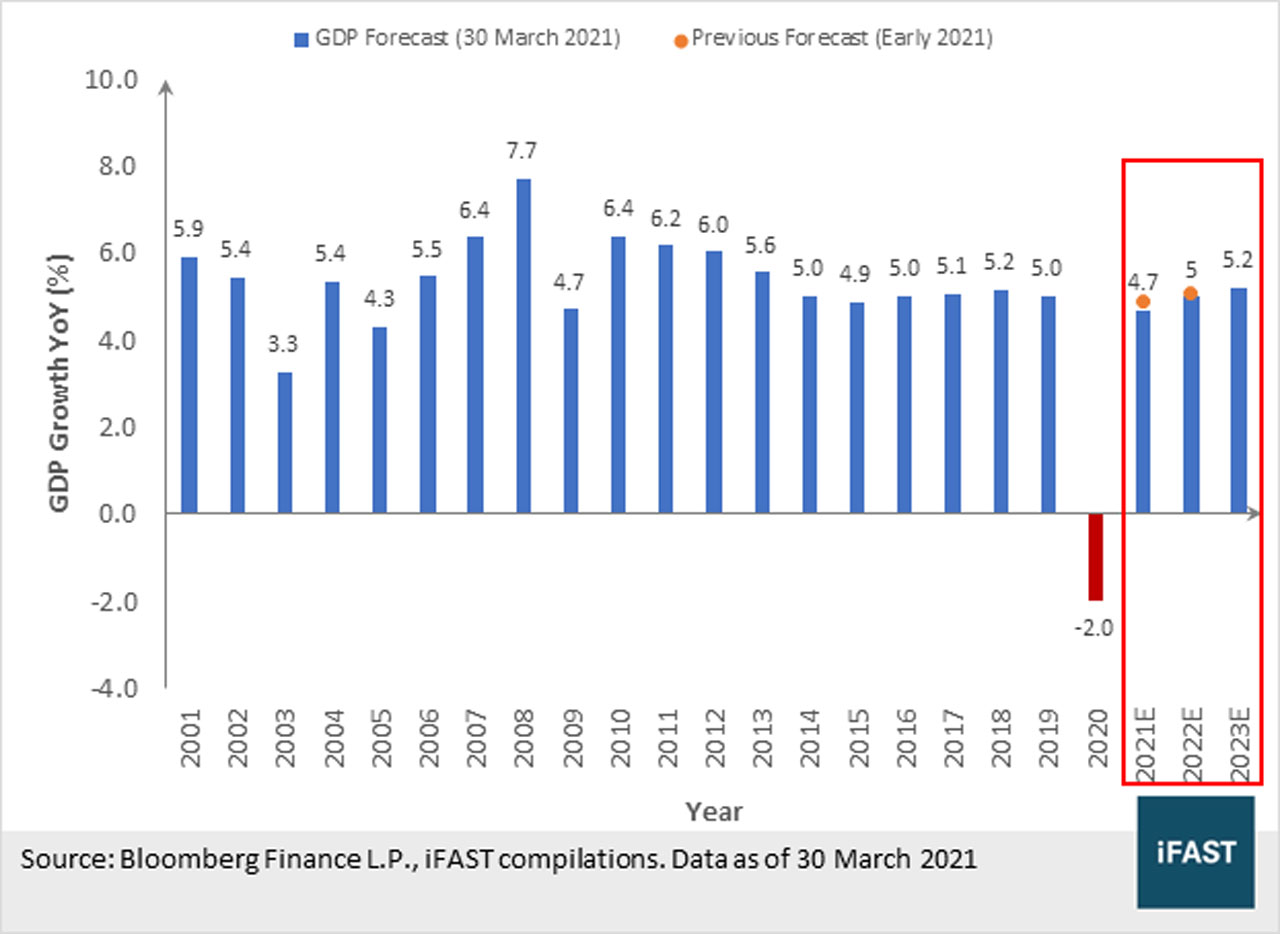 In 2020, the Indonesian economy was hampered by lockdowns as the government tried to curb a new wave of Covid-19 outbreaks. Subsequently, the lockdowns – together with the cross-country vaccination underway since mid-January – resulted in improvements in the Covid-19 situation.

We expect the economy to stabilise further in 1Q21 and rebound strongly in 2Q21. In annualised terms, Indonesia’s GDP is expected to see rebound strongly by 4.7, five and 5.2 per cent in 2021, 2022 and 2023 respectively, partly due to low base effect as well. These are still strong and enviable growth rates compared to peers across the region and globally. 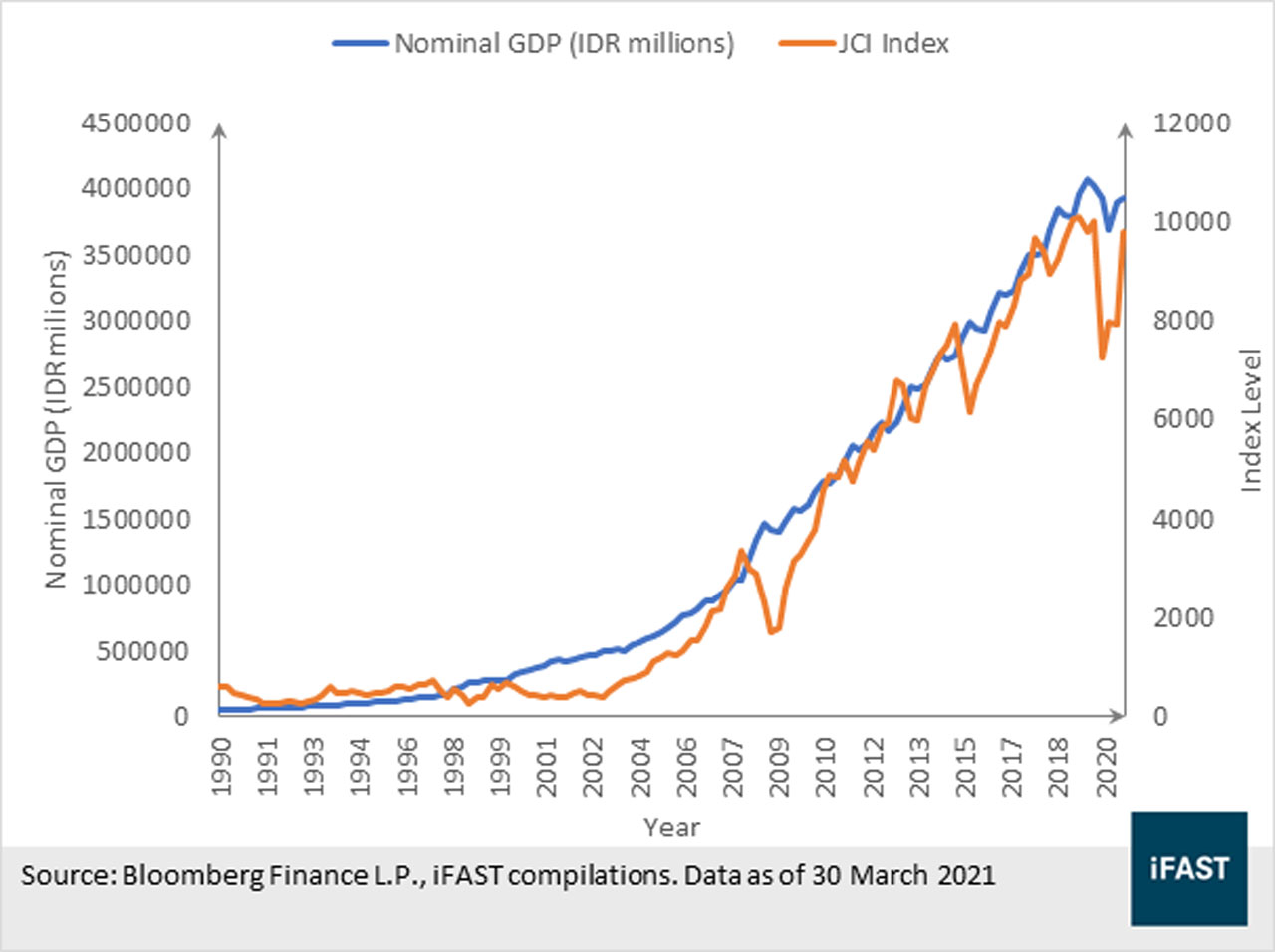 In line with our expectations at the start of the year, exports and manufacturing are showing signs of sustained recovery amid improving external demand.

Exports have started to show some sustained recovery with positive year on year growth from November 2020 to February 2021, for both oil and gas and non-oil and gas exports. In fact, exports in December 2020 hit a historical high value of US$ 16.5 billion.

Going forward, higher commodity prices will continue to be a tailwind for Indonesian exports.

Indonesia is a major commodity exporter for oil and non-oil exports where major exports include upstream and downstream products for oil and gas, palm oil, coal, iron, steel, which have seen pickup in exports which indicate demand across all products.

Key exports such as palm oil, coal, manufactured goods, have all been recovering since mid-year. Historical data also show that there is strong correlation between Commodity Prices and Exports growth is at a correlation ratio of 0.70.

On the other hand, we have also seen pickup in exports of manufactured goods which indicate demand across all products.

Indonesia also exports electrical goods, machinery and equipment, vehicles where we believe demand for manufactured goods will continue to pick up as global economy recovers.

PMI data also support our case, where the Manufacturing PMI had been in contraction levels for much of 2020, has turned back to expansion territory for four consecutive months from November 2020 to February 2021.

We think that exports are still at the beginning of a sustained rally and we will see continued sustained recovery on the back of improving external demand which can be supported by historical evidence that exports have had sustained periods of growth especially after recessions.

Due to Indonesia being a major commodity exporter, hence, historically JCI Index has shown positive correlation with commodity prices over the years, as higher commodity prices and higher exports boosts revenue and profits for related companies in Indonesia. 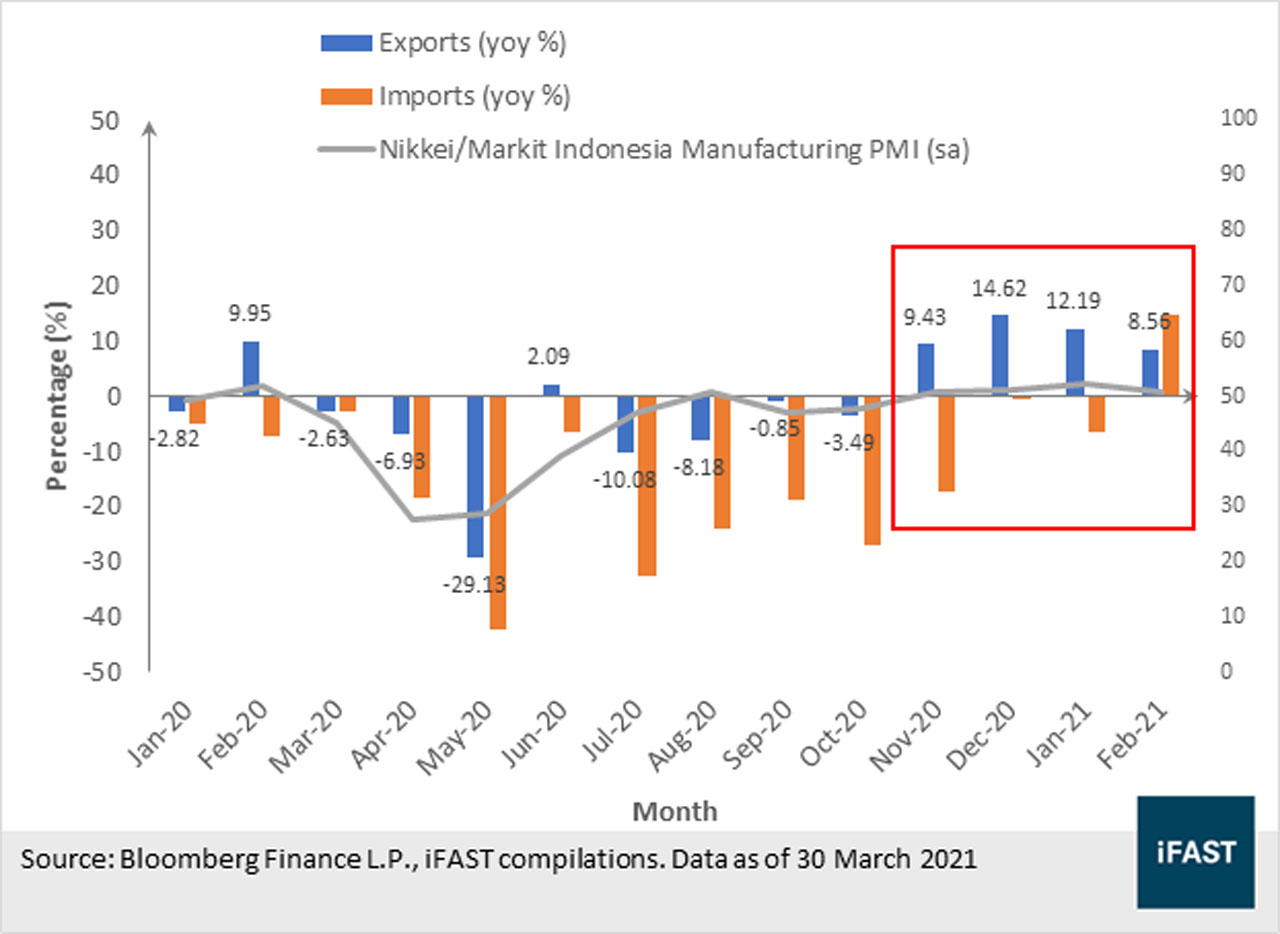 Trade and manufacturing PMI data since 2020

The lockdowns and slower economic recovery led to a worsened labour market, as the unemployment rate to increased further to 7.2 per cent (highest level since 2011), compared to the earlier estimate of 6.8 per cent.

Consequently, the weak labour market has continued to weigh on consumer confidence as the Consumer Confidence Index remained at below pre-pandemic levels.

The weak consumerism is also evident through the continued contraction in retail sales and private consumption in 4Q20. All in all, the Final Consumption Expenditure component of GDP (which is a big part of Indonesia’s economy, 64 per cent in 2020) fell by 2.8 per cent y-o-y in 4Q20.

As the global and domestic economy recovers whereas international borders reopen, we expect the labour market to improve, as companies start hiring to meet the increasing demand and prepare for a return of tourists.

Consensus expects the unemployment rate to improve back to pre-pandemic level by 2023. Consequently, we expect private consumption, consumer confidence and retail sales to recover.

Amidst the market volatility in February and March in 2020, Bank Indonesia (BI) implemented bold and unprecedented measures to stem capital outflows, ease financial conditions and stabilise financial markets. Measures included lowering the US$ reserve requirement ratio (RRR) from eight per cent to four per cent and rupiah RRR by 50 bps for certain banks, to boost banks’ liquidity and support export and import activities.

In response to the slower than expected economic recovery, BI cut the benchmark 7 day reverse repo rate to a new record low of 3.5 per cent in February 2021 after lowering it by a total 125 basis points in 2020.

BI has shown willingness to take aggressive measures in order to support markets and economy.

With inflation rate at record lows, we expect BI to maintain the loose monetary policy stance until at least 1Q22.