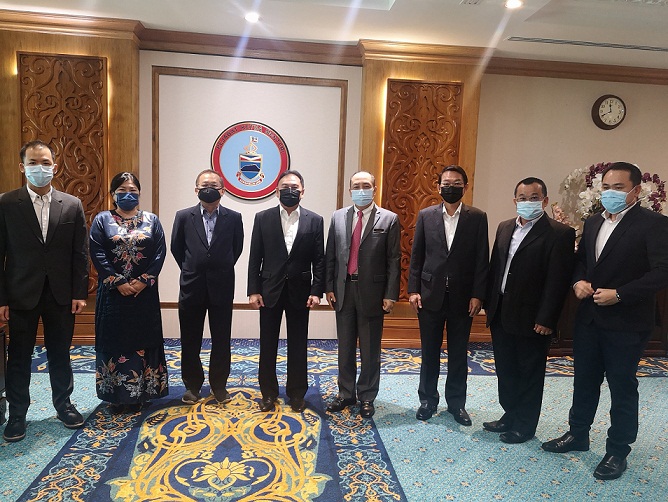 Chin (fourth left) and the LDP leaders paid a courtesy call on Hajiji (fourth right). From left are Lau, Wong, Shu Ying and from right are Sim, Simon and Yong.

Chin said the party had submitted its application to join PN to Prime Minister Tan Sri Muhyiddin Yassin.
He thanked Hajiji for agreeing to meet with the party leaders and supported LDP’s decision in joining PN.

Chin praised Hajiji for his open-minded and people-oriented leadership.

“Hajiji is the first Chief Minister who has provided allocation for opposition assemblymen.
“He has also resolved the stalled sky bridge project in the state capital within six months after taking over the helm of the State Government.”

In addition, he said the new State Cabinet had adopted the Private Finance Initiative (PFI) approach to expedite the construction of the Pan Borneo Highway.

“Hajiji has also pledged to secure more Covid-19 vaccines from the Federal Government so that more Sabahans could be inoculated as soon as possible.”

Chin said the party had discussed political issues with Hajiji during the courtesy call.
He believed that the State Government under the able leadership of Hajiji would attract more foreign investments to Sabah.

Chin reiterated that now was not the time to call for general election for the sake of the people’s health and safety.

He said holding an election amid the Covid-19 pandemic could trigger the third wave of infections and result in the collapse of our economy, especially Sabah which was heavily dependent on tourism revenue.