Monday, May 10
You are at:Home»News»Sarawak»Search underway in Igan waters for fishing boat crew believed to have fallen into sea 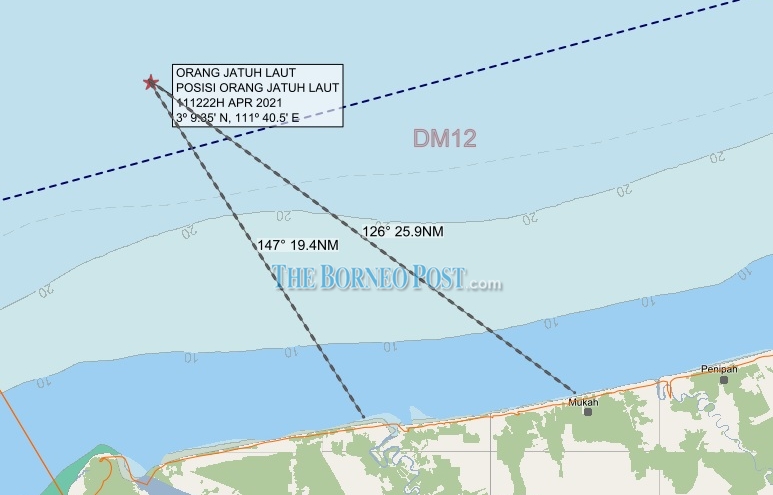 The map indicating the position where the victim is believed to have fallen into the sea.

KUCHING (April 12): The Malaysian Maritime Enforcement Agency (MMEA), through the Maritime Rescue and Search Centre (MRSC) Kuching has activated the search and rescue (SAR) operation in Igan waters following a report of a fishing boat crew who is suspected to have fallen into the sea last night.

“A friend of the victim had informed their employer stating that the victim was feared to have fallen from the boat as they had realised the victim was missing and not on the boat at 8am yesterday morning,” said a statement by MMEA Sarawak.

MMEA Sarawak also revealed that the victim, identified as Azrie Shafian Floren, 28, was said to have last worn a blue shirt and black shorts.

As of 7.30pm last night, no clues were found and the search focused around the position where the victim was believed to have fallen into the sea.

“(Following the incident) MMEA would like to urge the maritime community to cancel the intention to go to sea if the weather is bad.”

“Should there be urgent situation in which there is a need to go to the sea, prioritise safety by always wearing a safety jacket.”

MMEA Sarawak welcomes information from the maritime community to report any emergency at sea directly to the Malaysia Emergency Response Services (MERS) 999 number/line or the Malaysian Maritime Operations Centre Sarawak at 082-432544.