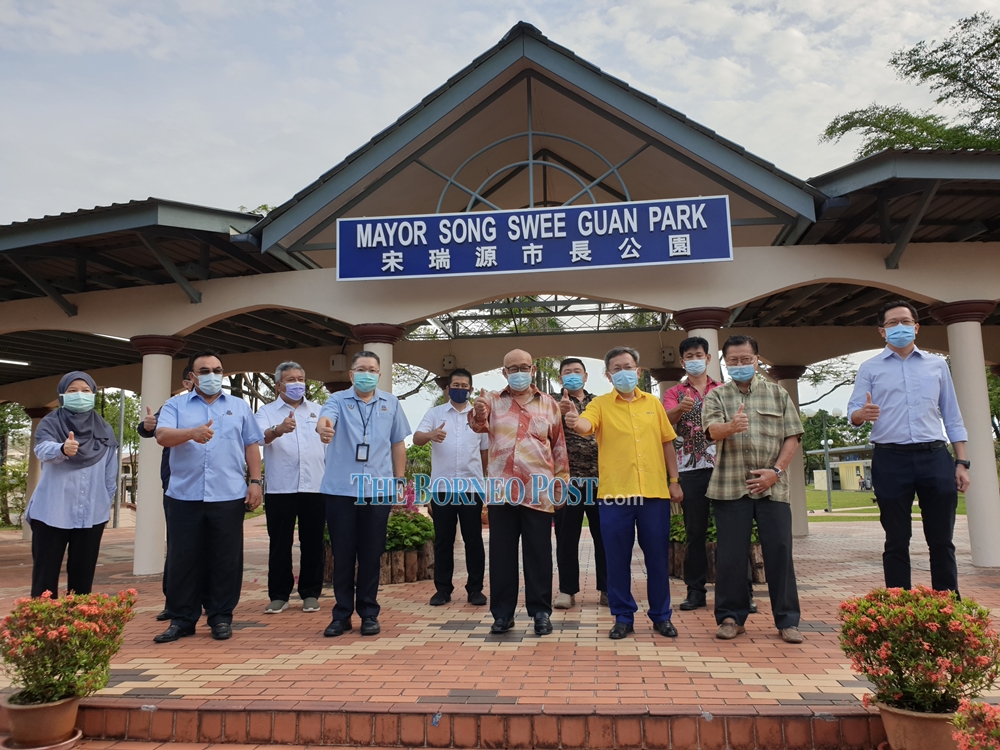 Song (centre), (from second left) Hilmy, Wee, Dr Sim and other guests giving their thumbs up during a photo-call at the event.

“Steeped in our tradition and Asian culture, we always recognise individuals who had contributed a lot when they were holding office. Such recognition can be as simple as naming a park after them,” said Dr Sim when unveiling the new name of the park at Tabuan Jaya here this morning.

Dr Sim said he was grateful that the gesture to rename the park after Datuk Song Swee Guan had received the full support from MBKS and the current Kuching South Mayor Dato Wee Hong Seng.

“Thank you very much everybody and I hope we all can work together in the future,” said Song briefly to reporters at the park.

Wee, who was also present at the event, said it was a very touching act to rename the park after Song in recognition of the latter’s contributions to Kuching South and his role as a pioneer of the green city concept in the state.

“We would like to record our sincere appreciation on behalf of all residents and staff of MBKS to Song, wishing him all the best in the future,” said Wee, adding that Song would always act like a mentor for the management of Kuching South.

After his stint as Kuching South mayor, Song served two terms as a state assemblyman before being appointed as a Speaker of the State Legislative Assembly in November 1996.

On a separate note, Wee said one of the interesting projects currently being embarked by MBKS was the 10-acre Kenyalang Park’s Traffic Garden that would consist of new garden pathways, bridge and community orchards, once completed.

Among those present at the event were Kuching South deputy mayor Hilmy Othman and councillor Bong Lian Huan.