Saturday, June 19
You are at:Home»News»State govt in talks with Putrajaya to secure own 5G spectrum needed to realise digital transformation initiatives, says CM 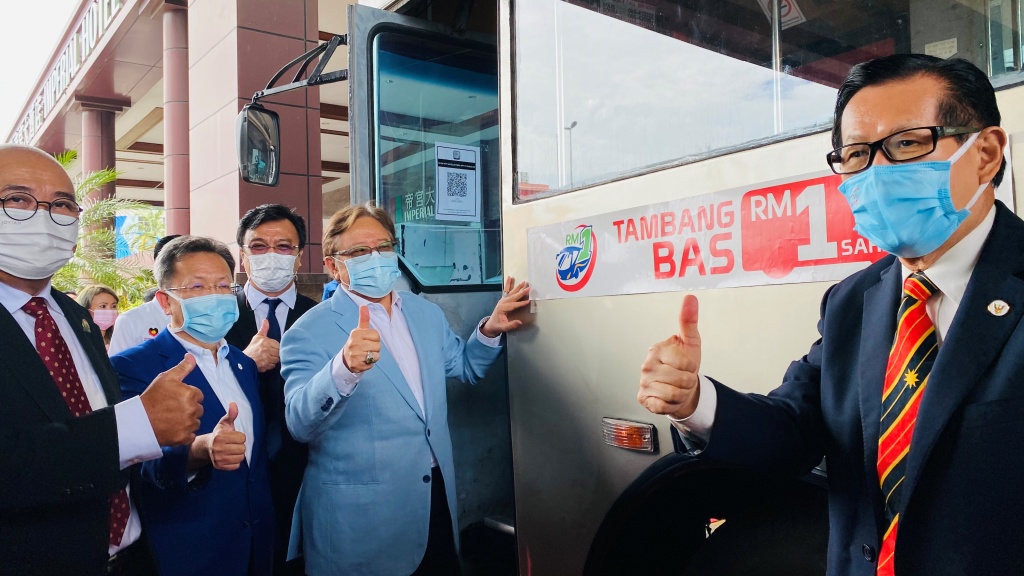 Abang Johari (third left) together with Lee (right), Dr Sim (second left), Yii (left) and Miri City Council (MCC) secretary Morshidi Fredrick giving the thumbs up after sticking Smart Bus sticker on a public bus. The bus can be tracked via a mobile phone application which makes it more convenient for commuters.

MIRI (Apr 13): Sarawak government is now in the process of discussion with the federal government to get its own spectrum to boost internet speed throughout the state, especially in rural areas.

“Spectrum will determine the speed. If you want to have 5G, you must have the speed of at least 700 over megahertz (MHz).

“We are now discussing with the federal government to give spectrum to the state agency which is Sarawak Digital Economy Corporation (SEDC),” he told a press conference after launching ‘Miri Smart City – Proof of Concept’ at Imperial Hotel here yesterday.

Abang Johari explained that spectrum is only given to telecommunication companies like Digi and Telekom.

“These people (telco companies) sometimes don’t go to the rural areas where there is no market and do not generate income for them. As public listed companies, they must be able to produce business margin,” he said.

In view of that, he said the state government will manage the spectrum in rural areas with 5G internet speeds by giving subsidy.

Earlier in his speech, the chief minister said the effort to transform Miri City into a smart city will help to support the digital economy initiatives being implemented in the state.

He gave his thumbs up to Miri for being a smart city model in Sarawak, and said this concept will be extended to Kuching, Sibu and Bintulu as well as other areas in order to make the state into ‘Smart Sarawak’.

Spectrum will determine the speed. If you want to have 5G, you must have the speed of at least 700 over megahertz (MHz). – Datuk Patinggi Abang Johari Tun Openg

Through the smart city initiatives, he said all the major cities will have to transform by using digital technology and providing fist class service to the people.

He believes such smart city initiatives will help ministries to provide efficient services to the people.

“By 2030, we will have all these facilities throughout Sarawak. Of course, in the transition period, we have to use satellite because satellites have to go through cloud.

“Once, we lay down our fibre optic then we can use the 5G. At the moment, we cannot apply the 5G because there is what we call interception in between.”

Previous ArticleRentap refutes claims Bersatu will use GPS symbol in next state polls
Next Article Lee: Greater Miri development plan in the offing